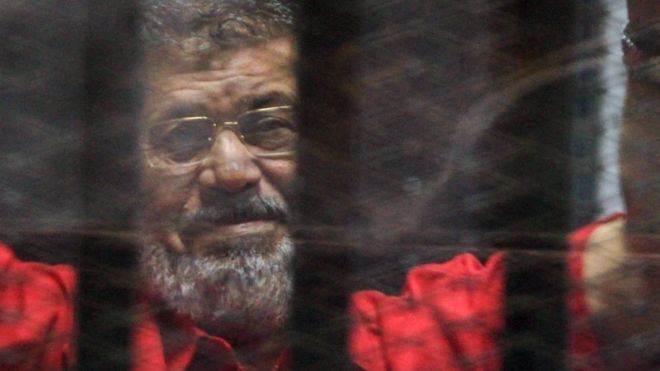 A human rights group on Monday called for an independent and international investigation by the UN into the death of Egypt’s first and only democratically-elected leader.

Human Rights Watch said the United Nations Human Rights Council should establish a probe into a wide range of human rights violations in Egypt, including the death of Mohamed Morsi.

“At the very least, the Egyptian government committed grave abuses against Morsi by denying him prisoners’ rights that met minimum standards.”

Morsi died after falling into a coma while in a glass cage in a courtroom during one of his trials, according to Egypt’s national television station.

“The Egyptian government failed for six years to provide Morsi his basic rights as a detainee, including sufficient medical care and family visits, despite his apparently deteriorating physical condition and his repeated requests to the judiciary for access to medical treatment,” the rights group said.

It said the treatment of the ex-president violates international law and may amount to torture under the UN Convention against Torture.

“Whatever one’s views of Morsi’s politics, his treatment was horrific, and those responsible should be investigated and appropriately prosecuted.”

After serving only a year in office, however, he was ousted and imprisoned in a bloody military coup led by Egypt’s then defense minister and current president Abdel Fattah el-Sisi.

Human Rights watch said the trial against Morsi did not meet the basic standards of due process and the case against him seemed to be politically motivated.

“A family member told Human Rights Watch that even during court sessions, security forces kept the former president inside glass barriers that isolated him from other prisoners and his lawyers. The media had largely been banned from covering his trials,” the group said.

According to notes taken by three security guards accompanying Morsi’s family during a visit, Morsi had no bed in his cell while in Cairo’s al-Molhaq Prison, part of the Tora Prison Complex, and that he had developed pain in his neck and back due to sleeping on the floor. He also developed a condition in his left eye and the prison doctor said he might need surgery. There was no medical follow-up for these health concerns, however.

Morsi was diabetic, according to the rights group, and told judges multiple times that he suffered diabetic comas while in prison due to the lack of medical attention. However, judges who heard his cases never ordered an investigation into his treatment or prison conditions.

The Muslim Brotherhood previously called on the UN to push for adequate medical treatment for the ex-president, citing his neglect while detained, according to London-based online news outlet Middle East Eye.

26 organisations call on EBRD to raise the issue of human...