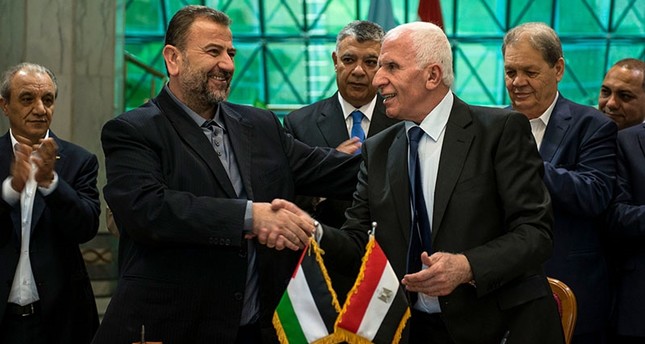 Member of the Palestine Liberation Organization’s (PLO) Executive Committee Azzam al-Ahmad has announced that Egypt will seek to put inter-Palestinian reconciliation talks back on track.

Ahmad, who is also a member of Fatah Movement’s Central Committee, explained after talks with Egyptian officials in Cairo that a high-ranking delegation from Egypt will visit Ramallah soon to meet with Palestinian President Mahmoud Abbas.

He said the delegation will also visit the Gaza Strip to resolve obstacles to inter-Palestinian reconciliation. Yet he didn’t specify the dates for such visits.

He pointed to the lengthy discussions that took place in Cairo with involved officials, saying “there are positive developments.”

“Positive steps are being taken, but I don’t want to discuss these developments,” Ahmad said, hoping Egyptian efforts would succeed away from the media spotlight.

“When Egypt completes preparations for its plans, it will make an announcement in the presence of Fatah and Hamas movements.”

Putting the reconciliation process back on track would end the one-year deadlock caused by differences over empowering Rami al-Hamdallah’s former government, sanctions on the Gaza Strip and ceasefire talks with Israel.

Hamas has also requested the formation of a new government that includes all factions and independent figures to solve crises hitting the Strip.

Among such crises are problems in the health and electricity sectors, Hamas employees’ salaries and the full commitment to paying them with guarantees on not terminating their services, guaranteeing their rights and solving the security issue without firing any Hamas affiliated security commanders or employees.

Hamas also stressed on fully integrating its employees in a security institution operating in accordance with national principles, and rejected any talk about the resistance’s weapons.

Sources told Asharq Al-Awsat that Egypt will launch a mediation to meet the demands of both sides by resorting to an initial approval by Fatah on forming a new government if the reconciliation agreement was struck.