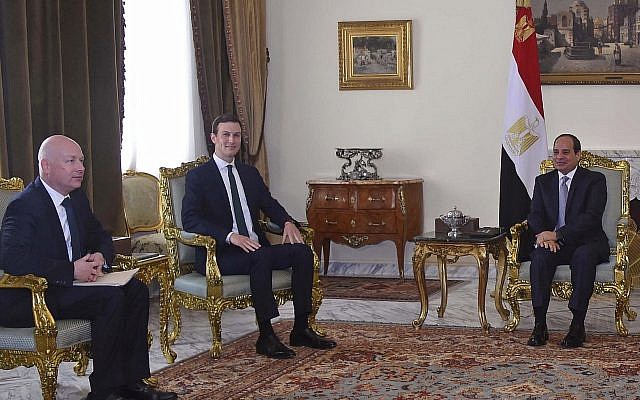 Nine billion and 167 million dollars; This is what Egypt will be receiving to implement the US plan for peace in the Middle East, commonly referred to as the “Century Deal.”

According to documents published by the US administration, in conjunction with the announcement of Jared Kushner; chief adviser to President Donald Trump for the first time during the economic conference held in Bahrain.

The documents, published by Enterprise, show that half of the amount Egypt will receive will be in the form of loans. The nine billion will be distributed as follows:

– $5 billion to modernise the transport infrastructure and logistics in Egypt.

– $1.5 billion to support Egypt’s efforts to become a regional center for natural gas.

– $125 million to the Overseas Private Investment Corporation (OPEC), to support small and medium enterprises in Egypt.

– $42 million to repair and modernize electricity transmission lines from Egypt to the Gaza Strip.

According to Kushner, the deal calls for the establishment of a global investment fund to support the economies of Palestine and neighbouring Arab countries, and to build a five-billion-dollar corridor connecting the West Bank and Gaza, bringing the total cost of the deal to $50 billion.

27 billion and 813 million of the 50 billion will go to the Gaza Strip and the West Bank, while the rest will be distributed to Egypt ($9.167), Jordan ($7.365) and Lebanon ($6.325). Which the United States relies heavily on Gulf countries, as well as on private investors, whilst financing the deal is highly uncertain, according to Reuters.

In his interview with Reuters, Kushner said that the main idea of ​​the Peace for Prosperity Conference to be held in Bahrain on the 25th and 26th of June is that “we want people to agree to the plan and then we will have discussions with people so that we know who is interested in what.”

It should be noted that a few days before the establishment of the Bahrain conference, Arab finance ministers held an emergency meeting in Cairo yesterday to discuss the financial crisis facing the Palestinian Authority, and suffering in paying the salaries of government employees since February 2019.