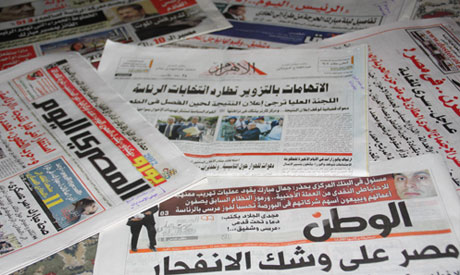 Amidst a controlled media narrative and a heavy blanket of government scrutiny, many Egyptians are questioning former president Mohamed Morsi’s death in whispers and with discretion.

CAIRO — The Egyptian media has come under intense criticism for its coverage of former Egyptian president Mohamed Morsi’s sudden and mysterious death earlier this week.

Egypt’s prominent newspapers downplayed the news, casting it to the inside pages, and TV news anchors either skim-read it or gaslighted their audiences by demonising the departed leader.

They also did not mention the country’s first democratically-elected leader by his former title and preferred to name him with his name and surname.

Amidst a climate of one-sided and controlled media narratives, Morsi’s death has certainly caused ripples in Egyptian society, triggering a passive debate about the overall security scenario, as well as human and prisoners’ rights and free speech. Even those Egyptians who opposed Morsi’s reforms as well as Muslim Brotherhood are speaking in whispers, expressing their regret and resignation against the manner in which the former leader was treated in prison and then allowed to die in a courtroom without any immediate medical help.

“Disputes between people should not conclude with death and it is improper to insult deceased individuals even when we had our political or ideological differences with them,” she added.

Gamal Eid, Executive Director of the Arabic Network for Human Rights Information, echoed a similar view saying: “To speak up against the oppression imposed on another human being doesn’t mean that you agree with them politically.”

Eid said that workers in the field of human rights are well aware of the situation of detainees in Egyptian prisons when it comes to medical treatment, solitary confinement, and preventative detention.

“It is the role of every legal activist and lawyer to demand a halt to the slow murder in Egyptian prisons and the torture of political prisoners,” Eid said.

Ever since Morsi was ousted by a military coup in 2013, independent media in Egypt has largely been silenced with coercion and intimidation. At least 32 journalists are currently jailed and prominent leaders from the opposing Muslim Brotherhood-affiliated Freedom and Justice Party are either languishing in Egyptian jails or have been forced into exile.

Therefore, the media glossing over Morsi’s death did not come as a surprise for Egyptian people. With the exception of the Al-Masry Al-Youm newspaper, which featured the news on its front page, all printed editions of Egyptian newspapers relegated it to the third or even fourth pages.

“No one is grieving, no one at all”

To address the smouldering antagonism of people, many pro-state television anchors took up most of the primetime space to demand a lack of sympathy for Morsi and berate him to the point of dehumanising the dead man and his grieving family.

TV anchor Ahmad Moussa screamed at the top of his lungs that Morsi is “the killer of heroes”.

Another senior pro-Sisi journalist, Amro Adeeb, said “no one is grieving, no one at all” and that the “whole matter has no legitimacy”. He added that no one should even “imagine that this matter is legitimate”.

The pro-state media even went after some prominent Egyptians who are in exile and condemned Sisi’s government for failing to prevent Morsi’s death. For instance, presenter and journalist Ahmed Moussa attacked popular Egyptian footballer Mohamed Aboutrika, who had sent his condolences to Morsi’s family. Moussa, a vocal supporter of the state, repeatedly referred to Abu Treka as a “spy”.

The country is gearing up for the 2019 Africa Cup of Nations, which will kick off on June 21, but many Egyptians fear the outbreak of another wave of violence in the streets, especially after the Muslim Brotherhood called upon people to take to the streets on Friday and pay homage to Morsi.

The government has responded with large police deployments across the country. In Morsi’s hometown, Al Adiwah in the governorate of Sharqyia, police forces were deployed in anticipation of any protests, according to the accounts of the residents on social media.

The overall security scenario has deteriorated since 2013, although Sisi has renewed the countrywide state of emergency of three months eight times. This month alone, eight policemen were killed in an ambush on a security checkpoint in North Sinai. Police and army forces retaliated, killing five militants.

With Morsi’s death, the public opinion is no longer linear and people have begun to ask basic questions on topics ranging from local services to national security to the protection of human rights.

Another one named Mohamed Salah wrote: “It is not shameful to express our humanity and sympathy when hearing the news of Morsi’s death, but it is shameful to accuse others of treason because we defend the simple rights of prisoners.”