EgyptWatch
Home Reports In Egypt being a journalist or a student at al-Azhar is enough... 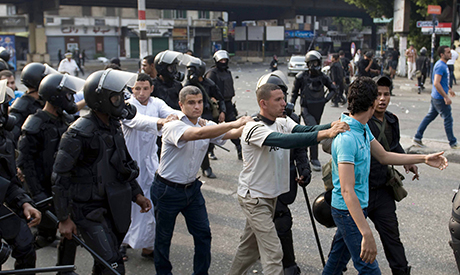 The Supreme State Security Prosecution (SSSP) has issued a decision to renew the imprisonment of journalists Hisham Fouad and Hossam Moanis for 15 days pending investigation into the case, the “Hope Alliance”.

Hisham and Hossam join dozens of journalists detained for political and journalistic activities, or for publishing articles detailing their opposition to the Egyptian authorities.

All journalists detained have been charged by the SSSP with joining a terrorist group established against the law.

Most of the journalists who have been released did not go back to their newspapers as they have also been dismissed, especially if they are working for state-owned newspapers.

At least seven Egyptian journalists have lost their lives in areas of protests and clashes between demonstrators and police, and there have been no measures put in place to ensure their safety.

In addition to those who lost their lives, dozens were arrested, among them Islamists, liberals and leftists. The only link they all have is that they oppose the authorities.

One of the journalists arrested during the Rabaa al-Adawiya square sit-in, Mahmoud Abu Zeid Shawkan, said that journalists working in the areas clashes took place were not protected.

Security forces arrest you because you are a journalist so that you do not document their violations. The demonstrators are also not comfortable with your presence. They think that you are taking photos of them to send to the security services, so you are targeted by both sides.

But the problem is that the Egyptian journalist, even when he gets out of jail, will find himself without a job. Most newspapers and websites would prefer not to hire a journalist who has been oppressed by the regime.

The stigma of being an opponent or former detainee will continue to chase you, even if you are not guilty or that newspapers are convinced that you have not committed a crime.

A few days ago Mahmoud Sabri was finally found to be innocent, three years after his arrest and torture, during which he spent a year in prison under investigation.

After two years of fear and anticipation, avoiding police checkpoints and paying a lot of money to lawyers, Mahmoud was finally found to be innocent, but he confirms that many of his former colleagues at Al-Azhar University have not been.

Mahmoud embodies the situation of many al-Azhar students after they staged huge demonstrations in protest at the overthrow of the country’s first elected civilian president, Mohamed Morsi.

Most of those who were later acquitted remained under the watch of security services and were repeatedly arrested or detained by the security forces at later times, even for a short period of time.

Sabri admits that many of his relatives and former colleagues have avoided standing with him in the street, talking to him in public or visiting his home for fear of persecution by the security services.

Sabri is not just stigmatised by those who believe he is a terrorist or did something bad – actually no one in his village does – but also from those who know he is a good person and did nothing wrong, they are just afraid of the security forces.

Mahmoud was acquitted, but his relatives and colleagues will not stop being afraid to approach him.

Being a journalist or a student at Al-Azhar is not the only reason for being stigmatised in Egypt. The neighbourhood you live in may also be a reason for this.

During the demonstrations that followed the overthrow of the army by the late President Mohamed Morsi, a group of neighborhoods were known as hot spots because they hosted large demonstrations.

Security forces systematically targeted those neighbourhoods and random arrests were made even for those who did not participate in the demonstrations.

Among those neighbourhoods are Helwan in the south of Cairo, Ain Shams and Matria in the east of Cairo, and Kirdasa and Nahia in north Cairo.

These neighbourhoods have witnessed large-scale arbitrary arrests and large-scale lawsuits have been filed, for example against the Helwan battalions, as well as the popular resistance (Kirdasa) and against demonstrators in Ain Shams.

In addition to those neighborhoods in Cairo, in almost every governorate there is at least one city or village whose residents have been stigmatised.

Abdel Rahman Jalel, a doctor from south Helwan, was stopped by security forces in one of the checkpoints who discovered from his identity card that he was from Helwan. He was arrested and tried under the Helwan Brigades case.

Abdel Rahman says that he was not confronted with any real evidence over his involvement, or investigated, but happened to be from Helwan, and from a neighbourhood known to oppose the authorities, and that was enough to arrest him.

Inside prison there are cells full of people from one village or neighbourhood who were arrested collectively. Some of them did not oppose the authorities and did not protest against them, but they were residents in areas opposed to the regime.

Being released or being innocent does not mean the end of the tragedy for political detainees in Egypt, because they will still be barred from work, isolated from society, and accused or stigmatised as being opposed to the authorities. 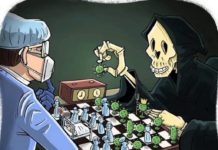