EgyptWatch
Home Reports In Egypt there are no real trade unions 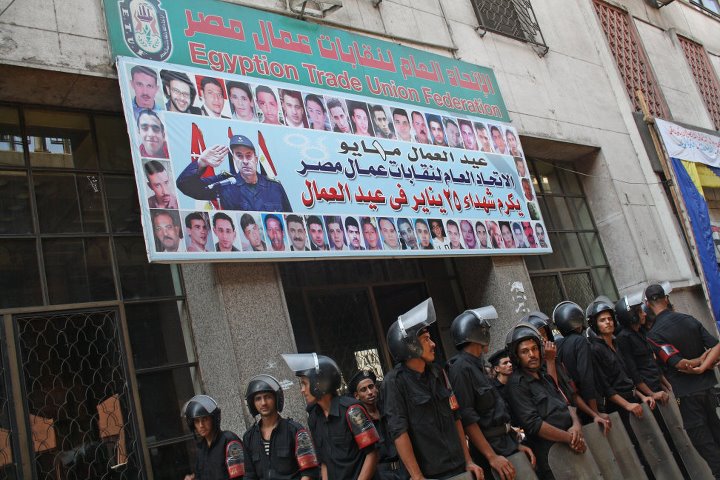 The International Labour Organisation listed Egypt on the short list of countries that violate labour rights (i.e. the black list) in session no. 108 of the international labour conference held in the Swiss capital Geneva. Although the Egyptian government has approved the amendment of the labour syndicates bill no. 213/2017, it violated agreement no. 78 concerning syndicate freedoms, as law no. 213/2017 conflicts with the agreement.

In February the cabinet of ministers approved a bill that amends some provisions of law no. 213/ 2017 concerning labour union organisations and protecting the right of syndicates. The amendment of article no. 11 provides that the workers of an establishment have the right to form a trade union for an establishment with no less than 50 workers employed by the establishment.

The workers of an establishment whose numbers are less than 50, and the workers of professions and trades, have the right to form a trade union at the city or at the provincial level provided that there are at least 50 members.

In January the experts’ committee issued its final report about Egypt concerning the application of trade union law no. 213/2017. The report indicated that the application of the trade union law obstructed the regularisation of union organisations whether independent or independent in nature and that such unions didn’t agree to be within the panel of the Egypt Trade Union Federation which is loyal to the regime.

The committee’s report called on the government to minimise the requirements necessary to form a trade union at the establishment level, which is 150 workers. That demand is to ensure the labourers right to participate in trade union organisations based on their choice.

The report indicated that the government has pledged to conduct a community dialogue. This dialogue will include all the trade union organisations, representatives of employers, and some trade unions that have failed to regularise their conditions.

In June 2018 about 70 unions and syndicates around the world called on the Egyptian government to respect Egyptian labourers and to protect the right to organise. They indicated that syndicates in Egypt have gone deliberately backwards to how they were before the January revolution.

The statement, entitled “solidarity towards Egyptian labour,” emphasised its support for the struggle of the trade union of Telecom Egypt as the Ministry of Manpower and Immigration has refused to let the union regularise its conditions, so it has no choice but judicial appeal.

Amr Hamzawy mentioned several defects in the new law in an article published by Carnegie Endowment: “practically this law eliminates many syndicate rights and freedoms, and took the side of the Trade Union Federation which is managed by the government and security authorities, while marginalising independent organisations.”

Hamzawy added: “Law no. 213 kept the restrictions on both syndicate rights and freedoms through diminishing administrative and financial autonomy. Imposed on the trade unions is the usual hierarchical structure which belongs to the 1950s, besides many other conditions on the small trade union organisations. These restrictions took the side of the Trade Union Federation at the expense of smaller organisations.”

The oppression of independent trade unions

The Revolutionary Socialists Movement issued a statement commenting on the blacklisting of Egypt. The movement said that “Egypt witnessed the worst labour elections during its history last year. Tens of thousands have been prevented from candidacy over security concerns. Obstacles have been placed against the labourers right to organise. The administrative body didn’t accept the documents of 86 independent committees from hundreds of trade union committees which applied to regularise its conditions according to the new law.”

This is all happening alongside the continuity of arrest and oppression policies against the labourer’s leaders who led the struggle to improve living standards.

The labourers’ file has been completely transferred to the security authorities to be the primary decision maker and to control the establishment of trade unions.

In a statement in May 2017, the general coordinator of the Egyptian Centre For Trade Union and Workers’ Services described the labour conditions in his country: “We are in an authoritarian state that deals with the labour movement with excessive violence.” He also called the labour scene “absurd,” then he asked they be saved from this unprecedented situation.

In an interview with Al-Shorouk newspaper, Abbas hinted at “the complicity of the government” represented in the Trade Union Federation appointed by the state against labourers and the Egyptian people in general. This complicity  happens through facilitating public sector sales, the privatisation of companies and manipulating the fate of labourers for personal gain. He noted that there are many complaints directed against Trade Union Federation leaders and against the government, but these complaints haven’t taken their course yet, which he described as “weird.”

The Trade Union Federation: Does it actually represent labourers?

This federation has supported the regime over the years, particularly the current one, as it’s always alleging it’s in favour of labourers rights.

In January 2018 the Centre For Trade Union and Workers’ Services issued a report in which it stated that “the government interferes directly against independent trade unions, as the government wants an obedient labour federation, despite the fact that such entities wouldn’t be able to build a good investment environment and don’t serve investment. Such entities don’t express labour interests who could blow up at critical moments, paralysing the work wheel.”

The report added that “with the countdown towards the law being issued, the labour committee of the parliament, the majority of whose members in the federation have been appointed by governmental decision from 2011 until now, approved the article of trade unions organisations’ bill.”

This approval was based on two bills; one of them is a governmental bill, and the other one is known as the bill of the official trade union federation proposed by the MP Mohamed Abdel Fattah. Both bills agreed on the denial of the actual status of labour establishments and the independent labour movement on the ground that they emerged during and after the January 25 Revolution.

In a report issued in June 2012, Carnegie Endowment said that: “Since the establishment of the Egypt Trade Union Federation in 1957, the Federation has always been considered the only legal syndicalist organisation in Egypt, having an official status under law no. 35/ 1976. Besides it has been always a tool in the hands of the government, in spite of radical political, social and economic changes that have occurred since the 1950s. Over the last decade, the federation has alleged that the number of its members is 3.8 million of the total work force estimated at 27 million, that almost all the members work for the public and private sector, and that the Federation’s construction relies on the public sector’s domination that has emerged since the era of Nasser (1954 – 1970).

The report stated: “the task of the Egyptian Trade Union Federation is to control Egyptian labourers as much as representing them, but it couldn’t prevent the mobilisation of radical labour in the late Mubarak mandate.”

Between 1998 and 2010, more than 2 million – maybe 4 million – participated in roughly 3,400 to 4,000 strikes and other common activities. Those protests played a great role in the delegitimisation of the regime for many Egyptians; it happened over long years before the mass protests that overthrew Hosni Mubarak in February 2011.”