EgyptWatch
Home Reports In Sissi’s Egypt, It Is Always 1984 | Opinion 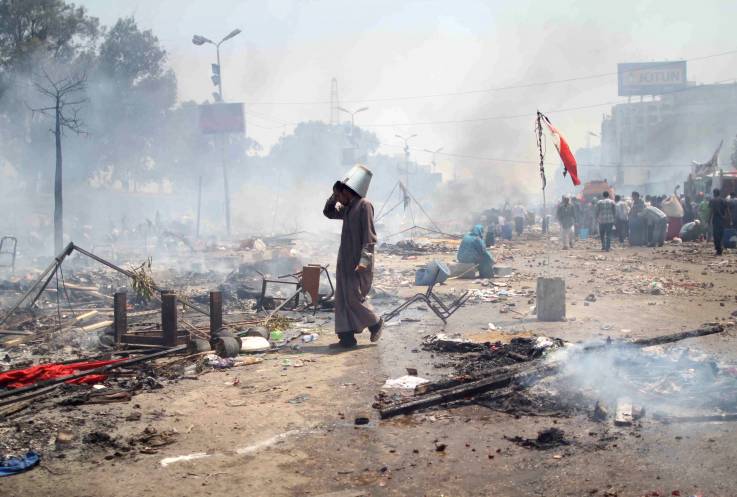 In much of the English-speaking world, the word Orwellian has become a throwaway term. It’s used to describe everything from CCTV cameras to staff-monitoring technology. For those in the West, Orwell’s cautionary tale about the overreach of government, total surveillance and propaganda remains—mercifully—a description of what could be, rather than what is.

In Egypt, this is not the case. On this day six years ago, the thugs of the incumbent president at the time, former General Abdel Fattah el-Sissi, descended on the squares of Rabaa and al-Nahda, killing more than 900 peaceful demonstrators. Human Rights Watch has called it one of the largest killings of demonstrators in a single day in recent history, and a probable crime against humanity.

The paranoia and subsequent violence that Sissi showed in the days leading up to and during the massacre have continued, albeit in a different form. The country has experienced the kind of slow and unceasing asphyxiation that can only flow from megalomania. It is defined by ever-stricter laws, ever-greater repression and ever-graver consequences for those who dare to defy the state. It is telling that Amnesty International calls Egypt an “open-air prison.”

The similarities with Orwell’s Oceania go beyond the superficial. Winston Smith, 1984’s central character, works in the Minitrue RecDep, “rectifying” historical records so that they align with Big Brother’s lies. Like Big Brother, Sissi has made the Egyptian media a mouthpiece for the state; television producers self-censor or speak highly of the regime for fear of reprisal. In a country where over a quarter of the population is illiterate, this is especially dangerous: Television producers define public opinion. And even in football stadia, dissent is crushed. When fans cheered for Mohamed Aboutrika during the African Cup, drones were used to identify them. It’s worth noting that Egypt jails more journalists on “false news” charges than any other country.

Egypt’s “Ministry of Truth,” then, seems to be fully functional. And so, too, is its “Ministry of Peace.” In the nightmarish world of Orwell’s imagination, the three inter-continental superstates are engaged in perpetual war. The war continues in order that they can maintain ideological control over the people. In Egypt, it is no different, and the enemy with which the country is in never-ending conflict is a familiar one: the “terrorist.”

Like other dictators before him—and other dictators and would-be dictators elsewhere today—Sissi invokes the “terrorist” to justify his crimes. It is the reason for the hidden war in the Sinai peninsula, the mass incarceration of some 60,000 prisoners of conscience, the heavy-handed tactics of his Security Forces. And it is the means by which Sissi’s international supporters, tacit or otherwise, rationalize their ongoing endorsement of the man who began his reign with an act of mass murder. They ought to have known, as history tells us, that the kind of man who engages in such inhumanity is not a man who believes in the sovereign rights of the individual. Violence of one form or another—physical, emotional, psychological, spiritual—has continued ever since that black day in Cairo six years ago.

And it is an especially insidious feature of Sisi’s Egypt (as it is of the Party’s Oceania) that the repressive state itself offers the only hope of deliverance. Those who wish to escape their conditions and better their lot can do so only by deepening their relationship with their oppressor. Only the bloated state apparatus—government, military, and government-controlled media—thrives in modern Egypt. Those who join it must therefore enter a Faustian agreement whereby they abnegate their sense of right and wrong and true and false in order to throw off their chains.

There are further likenesses. But there are also important differences. “If there is hope,” Winston writes, “it lies in the proles.” Yet—and it becomes clearer as the narrative moves forward—there really is no hope for the people of Oceania. What is terrifying about 1984 is the constancy of the present situation, the thought that everything will more or less remain the same forever, save for an unforeseen, and unlikely, cataclysmic event. And this—crucially—is not the case in Egypt. Sissi’s incompetence as an administrator and manager of public finance has taken the country to the very brink of economic and societal ruin.

The horror of Sissi’s Egypt, then, is not merely the daily cruelty, caprice, impoverishment and suffering, but the possibility—indeed, the likelihood—that it will get worse. There is a “one-in-four chance” that Egypt will experience a major mass killing this year, the Early Warning Project says. Some speculate that Egypt will become the world’s next failed state. And when a country of almost 100 million fails, the consequences are so grave as to be almost indescribable.

Six years after the massacre in Cairo, Egypt cries out for democracy. In its absence in the intervening years since the 2013 coup d’état, Sissi has constructed an empire of lies. Election manipulation is the norm. “Disappearances” and torture are commonplace. Freedom of speech, expression and assembly no longer exist. For Sissi, it seems that war is peace, freedom is slavery, and ignorance is strength.

Osama Gaweesh is an Egyptian journalist and TV presenter currently in exile in the U.K.