EgyptWatch
Home Reports Is there a conflict between the security and military services in Egypt? 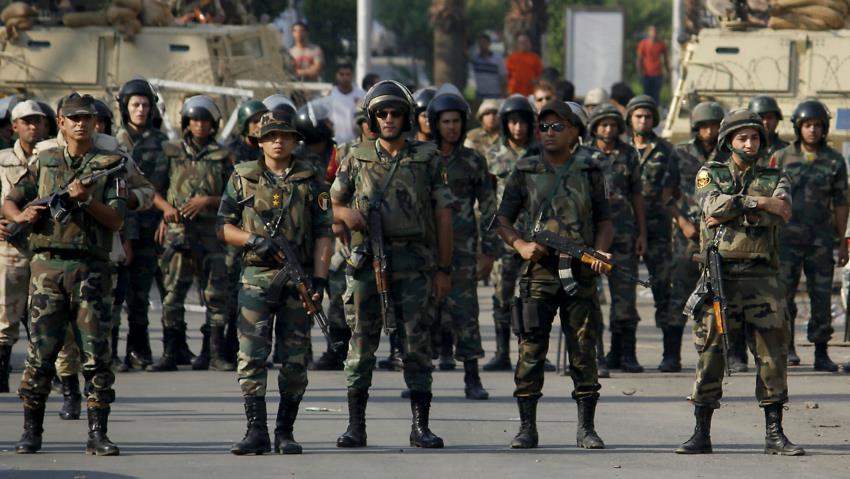 The current political movement in Egypt, which most prominently manifested in the outbreak of protests against President Abdel Fattah al-Sisi last Friday and Saturday, has raised speculations about the existence of entities in the state that support this movement and want to get rid of al-Sisi, and the existence of a hidden conflict within the ruling security services.

This theory was reinforced by the light handling of demonstrations by security forces. Although they did forcibly disperse them and arrested hundreds of participants, they did not use excessive violence or shoot at demonstrators, as used to happen before during the protests that followed the country’s military coup in 2013.

Abdel Fattah al-Sisi, who was once a major general in the army, ran the Military Intelligence Service in 2010. At the time, the powerful Major General Omar Suleiman, headed the General Intelligence Service for nearly 17 years. He enjoyed the absolute confidence of President Hosni Mubarak and had the upper hand in all important files, topped by the Palestinian file and relations with Sudan. The State Security Service (now the National Security Agency) was also very influential in Egypt and ran political life under the leadership of former Interior Minister Habib el-Adly.

After the revolution of January 25 2011 and the military junta taking office, the situation was overturned; Major General Suleiman was overthrown and the influence of the General Intelligence deteriorated. Habib el-Adly and the state security body fell, and the military intelligence service came in to have the upper hand over al-Sisi.

This continued throughout the period during which al-Sisi served as head of the military and also during his tenure as defence minister, amid side-talk of attempts by the General Intelligence to restore its role, or at least balance the role of its military counterpart.

Following the military coup led by General al-Sisi against former President Mohamed Morsi on July 3, 2013, al-Sisi used his influence over the interim President, Adly Mansour, and appointed his friend, Major General Mohamed Farid el-Tohamy as head of the General Intelligence Service to ensure his loyalty. El-Tohamy started then to “trim the nails” of the agency.

Since assuming the presidency, al-Sisi has issued several decisions, according to which dozens of officials of the General Intelligence Service were referred to pension on the grounds that this was their wish, or due to the deterioration of their health. A number of members of the agency were also excluded by sending them to work in civilian ministries.

The first of these decisions was less than a month after al-Sisi became president, specifically in July 2014 when he referred 14 agents of the General Intelligence to pension. In February 2015, al-Sisi issued decisions, published in the Official Gazette, relocating three General Intelligence employees to work in some civil ministries.

In June of the same year, al-Sisi referred 11 General Intelligence officers to retirement, citing the decision as having been requested by most of them, nine at their own wish, and two because of health conditions, according to the text of the presidential decree. A month later, a decision was issued to transfer 19 officials of the agency to civilian government jobs, without mentioning the reason. In December 2015, al-Sisi issued a new decision to refer 13 agents of the General Intelligence to pension.

In July 2016, al-Sisi referred 17 General Intelligence commanders to pension, and transferred six other employees to civilian jobs. Among those referred to retirement was Major General Ehab Asaad Ismail, one of the architects of the 2015 parliamentary elections, and also one of those who masterminded the presidential elections that brought al-Sisi himself to power.

In January 2017, al-Sisi issued a decision to refer 19 agents of the intelligence service to pension, headed by the head of the Palestine file in the agency, Major General Wael Mohammed Abdel Ghani al-Safty. An opposition channel broadcast a leaked audio of al-Safty criticising Palestinian President Mahmoud Abbas.

Many of the retirement referral decisions came within the framework of getting rid of the old loyalties of the late Intelligence Chief Omar Suleiman and his two successors, Morad Mwafi and Raafat Shehata. Some others were due to disagreements between the General Intelligence and the Military Intelligence services because of their overlap in fighting terrorism in North Sinai, and some of them were because of the work of some leaders from the “General Intelligence” to get rid of al-Sisi.

The General Intelligence leaders did not stand idly by, trying more than once to embarrass al-Sisi or to get rid of him. In late 2014, opposition channels broadcast audio recordings from al-Sisi’s office, when he was defence minister, forging documents relating to the whereabouts of former President Mohamed Morsi, days after his ouster.

Following the leaks, al-Sisi fired his friend Tuhami from the General Intelligence Agency and appointed Major General Khaled Fawzi, prompting some to believe that the agency’s leaders gave the opposition channels these recordings to embarrass al-Sisi.

In early 2018, al-Sisi made a surprise decision to dismiss Khaled Fawzi, and appoint his office director and right arm, Major General Abbas Kamel, as director of the agency. It is believed that the reason for the overthrow is the communication of leaders from the General Intelligence with former Chief of Staff Lt. Gen. Sami Anan, and former Prime Minister Lt. Gen. Ahmed Shafiq, to ​​encourage them to run in the presidential elections and get rid of al-Sisi.

Although Major General Abbas Kamel, al-Sisi’s right-hand man, and Brigadier General Mahmoud al-Sisi, the president’s son, are currently in charge of the General Intelligence, it is still believed that there are leaders in the agency seeking to get rid of al-Sisi. They are believed to be the ones who encouraged the businessman Mohamed Ali to reveal the extent of corruption, his family and military leaders are embroiled in and are encouraging demonstrations against al-Sisi to pressure the military to agree to get rid of him.

Army commanders are not a single-hearted unity

Since 2015, there has been talk of tension between army commanders and President al-Sisi, after al-Sisi chaired meetings of the Supreme Council of the Armed Forces (SCAF), although the constitution stipulates that the Defence Minister (Sedki Sobhy at the time) is the chairman. These conversations were confirmed after al-Sisi visited the army forces in North Sinai in the absence of Defence Minister Sedki Sobhy and the commander of the Sinai military area Osama Askar.

The agreement to demarcate the maritime boundary between Egypt and Saudi Arabia, under which Egypt ceded the islands of Tiran and Sanafir, stirred up controversy within the Supreme Command of the Armed Forces. According to military and government sources, Defence Minister Sedki Sobhy refused to sign the agreement to transfer the islands of Tiran and Sanafir to Saudi sovereignty, as well as the Chief of Staff General Mahmoud Hijazi who also held meetings with senior Saudi officials to discuss details of the completion of the transfer of Tiran Island to Saudi Arabia.

During the past few years, President al-Sisi has dismissed most of the military leaders who participated along with him in the overthrow of former President Mohamed Morsi, starting with Chief of Staff General Hijazi, who was dismissed suddenly and humiliatingly amid reports that al-Sisi’s had marginalised him. Defence Minister Sedki Sobhy was also fired suddenly in the middle of last year.

Although al-Sisi has eliminated most of the leaders he believes may one day oppose him, there is believed to be leaders in the military dissatisfied with President al-Sisi’s style of state management and control of all keys to the government in Egypt, which poses a threat to the Egyptian state. These leaders are believed to support the current demonstrations and may see them as a safe way to get rid of al-Sisi under popular cover.

Coronavirus brings black market in US dollars back to life