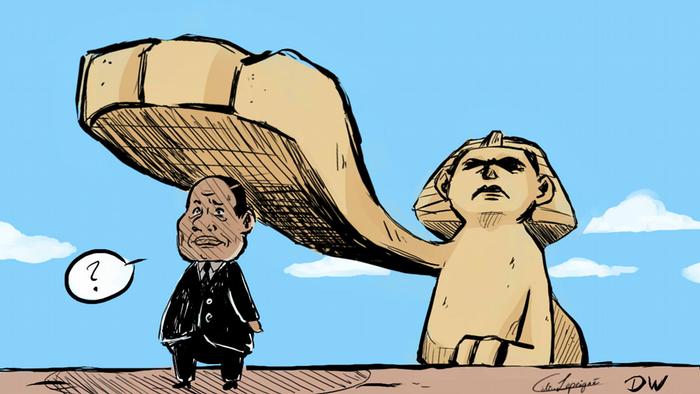 The reasons that led to the mass protests in Cairo and many other cities in Egypt in 2011 have not diminished in number. On the contrary, they have increased to an extent not seen even under former President Hosni Mubarak before his ouster. The suffering of the Egyptians has reached its limits.

In recent years, the resources of the middle class have been eroded to such a degree that people can hardly support each other any longer. The grand plans of the el-Sissi regime have failed to benefit the poor; in fact, they have sunk into even deeper poverty.

And never before in Egypt’s history have there been so many political prisoners; the country’s detention system is bursting at the seams and new jails are even having to be built.

Voice of the people

Some 60,000 people — branded as “terrorists” by el-Sissi’s regime — have already reportedly been imprisoned for political reasons.

Since the fresh wave of protests that began on September 20, this number has steadily increased, and even the Egyptian military has been targeted by arrests — el-Sissi obviously wants to get rid of any critics there before they can become dangerous for him.

As with the 2011 protests, the impetus for the latest round of demonstrations came from a completely unexpected quarter. Mohamed Ali, a building contractor who went unpaid by the military for years, absconded to Spain, from where he has been posting whistleblower YouTube videos every few days telling stories about the everyday corruption of the Egyptian army. Ali also holds up official documents, such as written correspondence and bank statements, to the camera, and calls on his compatriots to tell others anything they know about the intrigues of the generals in particular. And what is even more alarming for the regime: More and more people are doing exactly that.

Ali’s calls for protests and for the deposition of el-Sissi would not bear fruit without the broad social discontent prevailing in the country already. Many Egyptians also find him credible because he comes from an impoverished background and is now, like a Robin Hood, challenging the further enrichment of a class already spoiled with privileges: the military.

It speaks volumes that Mohamed Ali has built many civilian projects for the generals, such as hotels and modern palaces, that have nothing to do with an army’s actual military role.

Rumors of a potential successor

Ali grew up on the edge of Cairo’s Agouza district, one of the city’s most poverty-stricken districts. He never received regular schooling but went on to achieve success as a self-made businessman.

Today, he says he is doing what he does for the sake of the poor; even as a millionaire, he says, he has not forgotten how they live.

He maintains that the country is in a terrible state and he particularly lashes out at el-Sissi and his wife, who, like Ali, comes from a poor background.

Precisely this fact makes many Egyptians even more indignant at how she, in particular, flaunts her new wealth, whether with jewelry or with luxurious wishes regarding the renovation of a palace built for her, which Mohamed Ali has now presented to his fellow Egyptians.

But el-Sissi has clearly learned a thing or two from his predecessor’s downfall. The Egyptian security forces are displaying a willingness to employ all the brutal measures it takes to prevent the protests in the streets and squares from reaching a critical mass that could trigger the ouster of the president. The latter must be extremely worried; otherwise, his media cronies would not be firing such broadsides at the new protest movement and its supporters.

The name for a potential successor to el-Sissi is already being bandied about: Sami Anan. Anan, head of general staff from 2005 to 2012, was arrested in 2018 when he tried to run in opposition to el-Sissi in the presidential elections.  He can count on the support of the many officers who have been dismissed in the last months.

It is clear that things are heating up not only in Tahrir Square, but also within military ranks. The pressure in the Egyptian cauldron is building to a head again.