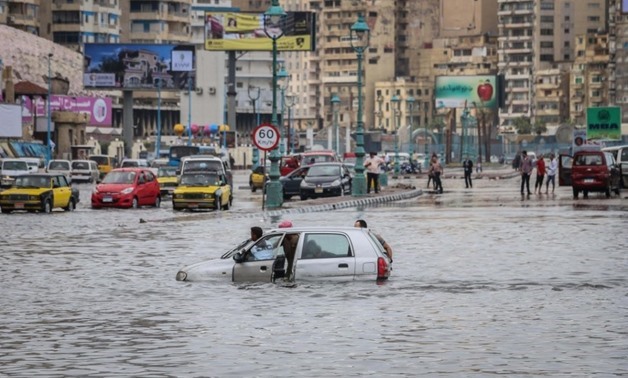 Several people have died since heavy rains and flooding began to paralyse Egypt‘s capital, Cairo, and other cities two days ago.

Al-Watan newspaper reported on Thursday that nine people had been killed in at least four cities, with most of the victims, including children, dying from electrocution by power cables that were submerged by floodwaters.

The Associated Press news agency, meanwhile, put the death toll at 11, citing updated statements released on Thursday by police departments and hospitals in governorates that were most affected by the downpours.

In the capital, the rains and the flooding, which started on Tuesday, also caused enormous traffic jams and prompted authorities to close schools and universities in the Greater Cairo area on Wednesday.

In the Mediterranean city of Alexandria, the heavy rain caused a three-story building to collapse, killing a seven-year-old child and injuring her 19-year-old brother, according to the city’s civil protection authority.

Tuesday’s rainfall in Alexandria was reminiscent of the deadly flooding in 2015, which killed five people and led to the resignation of then-Governor Hani el-Mesery.

Thunderstorms are not unusual at this time of the year, but a persistent circulating storm low is rare.

The forecast for the weekend shows the responsible low-pressure centre deepening a little and generating significant thundery rain. Areas most at risk from flooding and lightning strike include Alexandria, Port Said and the north of the Sinai Peninsula.

There are two large-scale influences on the weather that are currently in phase over eastern Africa: firstly, the waters of the Indian Ocean are warmer than usual off the African coast; and secondly, a wave in the upper atmosphere, known as the Madden-Julian Oscillation (MJO) is encouraging any thunderstorms or areas of low pressure to deepen.

These two have contributed to the recent flooding in Kenya, with the MJO likely to have strengthened the downpours in Egypt.

Has Egypt failed to secure Sinai?