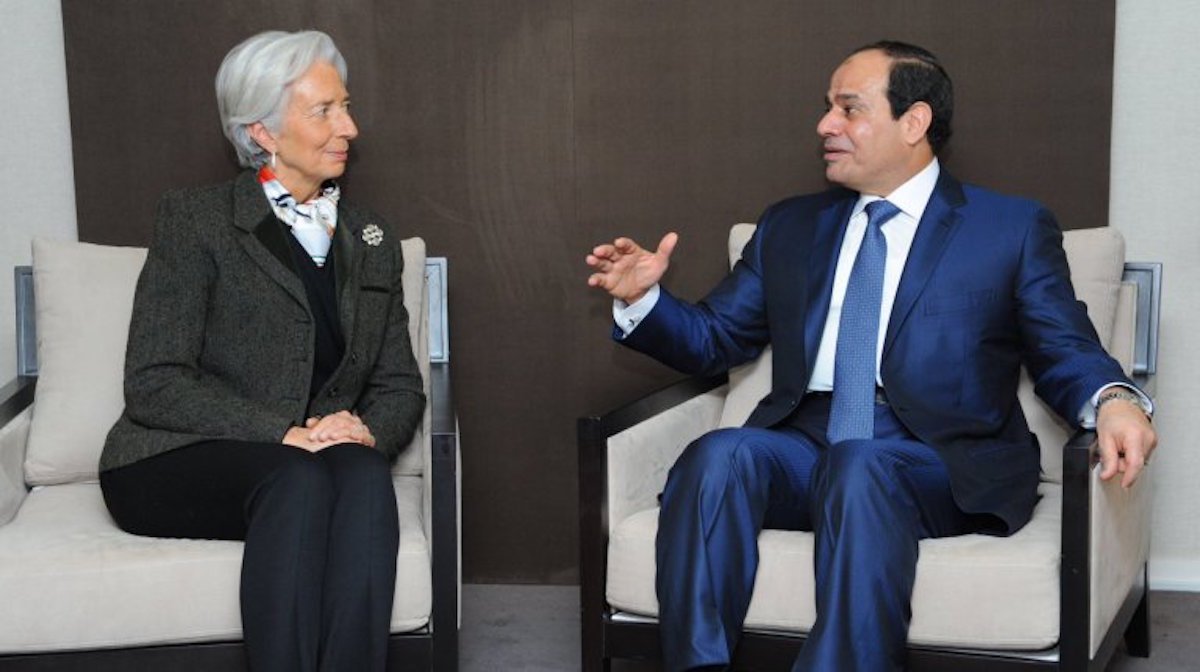 During the recent period, news has spread about negotiations between the Egyptian government, represented by the Ministry of Finance, and the International Monetary Fund (IMF), about a new loan or expanding the current loan for another year. The Ministry of Finance has denied the news and emphasised that the deal that the government intends to make is non-financial with no loans. The purpose of this deal is to provide technical support to maintain macroeconomic stability and to reduce the national budget deficit and the state’s loan and increase growth rates to create new jobs especially for women and young people.

As usual, the IMF focuses on the macroeconomic balance and controlling the national budget deficit even it was at the expense of education, health and subsidies, besides keeping loans within secured limits, reaching the fair value of the exchange rate and other issues that captures the attention of the IMF.

The IMF is very sharp on any of the previous matters, as its agreement with the Egyptian government in 2016 was conditioned upon releasing the exchange rate and reducing energy support. Moreover, the IMF postponed the payment of the fifth and the last installment because of the Egyptian governments delay in the price-indexation of fuel to the global price and for the postponement of providing a number of public sector companies in the stock market.

While the Egyptian government hasn’t committed to many other important procedures signed within the agreement, the IMF has always tolerated such commitments. For example, Egypt has been committed to only four procedures out of 14. Reducing the inflation rate was on top of the list of uncommitted procedures at that time, but the government received the second installment of the loan smoothly. In addition to this, the government hasn’t been committed to many other procedures which aimed to improve the business climate, eliminate obstacles that face women in the labour market and provide nurseries inside companies that exceed a specific limit of workers’ numbers.

Another example is that the IMF has totally ignored the non-compliance of transparency and information availability principles as the government hasn’t published the periodic reports of monetary policy and monetary stability as agreed with the IMF. However, the IMF has decided to move on and provided the third installment. This review revealed that the procedures committed by the government had negative social effects  on the majority of Egyptians. In this regard the IMF only focuses on the necessity of achieving high growth levels while there is no real discussion about the fair distribution of the benefits of this growth among Egyptians.

In spite of many social measures taken by the government to mitigate the severity of the financial and monetary measures taken since 2014, it wasn’t enough and it had a negative impact on the welfare of citizens, particularly the middle class. The result was 4 million citizens living below the poverty line within three years from 2015-2018, which was not a surprise for the government or the IMF. In fact, they expected more numbers to be below the poverty line because of the application of a deflationary policy, however they intend to move forward to implement their policies without regard to the victims.

Every time poverty or social justice has been mentioned, the government rushed to mention Takaful and Karama (the solidarity and dignity programme) as the single solution to the problem. In the same time the government doesn’t mention that the programme is covering 10 million people only, while the number of poor exceeds 30 million. Also, the government doesn’t mention that Takaful and Karama are only worth 13 per cent of the minimum income to put an average Egyptian family on the poverty line precisely. Also, they don’t mention the current elimination of eligible families from the programme to include other families without any guarantee to prevent the eliminated families re-entering the poverty cycle.

However, the real reform is the most prominent thing that the IMF ignores constantly, in spite of being the main guarantee of any financial or monetary reforms. Real and institutional reform is fighting the rampant corruption in the administrative body of the state, female empowerment, promoting transparency and fixing the administrative way of managing the state’s lands. There are many other procedures which aim to build a solid structure of the Egyptian economy, to make the economy capable of producing resources autonomously through export, creating sustainable inclusive growth to produce long term productive jobs in the sectors of agriculture, manufacturing and services.

It cannot be done without reviewing the reform approach recently followed by the state, and stopping the waste of more money on invaluable dead investments. We talk here about investments in palaces and new cities and the adjustment of the business climate for the private sector as the main engine of development and stopping it from being crowded.

The absence of real and institutional reform was obvious in three major distortions:

First, the structure of economic development and the kind of jobs produced from it in the recent period, it’s unsustainable growth and incapability of creating productive and sustainable jobs to absorb young graduates. Instead, it basically depends on unskilled labour as it is driven by the growth of the construction and building sector, real estate activities and communications. Other vital sectors such as manufacturing and agriculture remains within the lowest growing sectors according to the Ministry of Planning and International Cooperation.

Secondly, the inability to maximise the use of the competitive advantage provided by releasing the exchange rate to increase the Egyptian export in a way that improves the trade balance. In spite of the growth of the goods’ export value at 24 per cent in 2013/2014 and 2017/2018, but the coverage percentage of exports compared with import decreased from 43.2 per cent to 40.9 per cent in the same period.

Accordingly, the negotiations with the IMF generate many questions about all the problematic matters discussed in this article. Will it mean that the government will move forward with its policies and those structural distortions will continue? Will the cycle of poverty attract another 4 million people over the next few years? Or will possible changes be implemented?