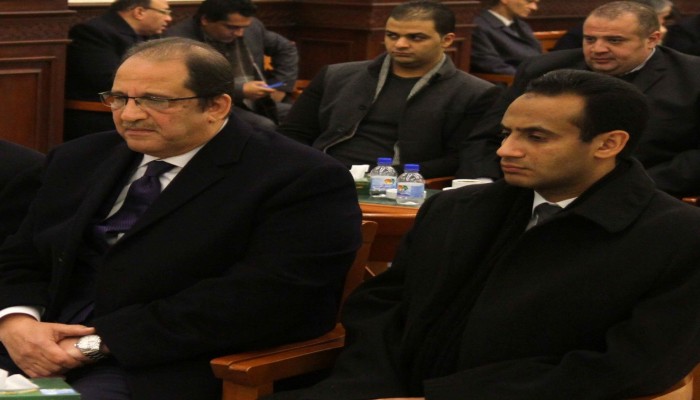 Several days ago, Egyptian intelligence sources leaked reports that the son of President Abdel Fattah al-Sisi had been excluded from the General Intelligence Service and was taking a long business trip to Moscow.

In addition, the intelligence officer and director of the office of the head of the General Intelligence Agency, Ahmed Shaaban, was also excluded. Reports circulated that financial investigations were being conducted against him.

Ahmed Shaaban next to Abbas Kamel

The media focus is on the exclusion of the president’s son, while Shaaban’s exit is more important.

The man who runs Samsung

After the overthrow of the late President Mohamed Morsi in July 2013, a leaked video came out of an educational seminar of the armed forces. Al-Sisi, then Minister of Defence, talked about the danger of the media to the armed forces after the 25 January revolution broke restrictions imposed on every sector.

Consequently, what occupied the military junta from the first day was how to restore the institution’s immunity from media coverage. Al-Sisi said that the military would regain its immunity through its own media arms, yet this requires time and effort.

On May 17, in a move that shows how the Egyptian media is dominated by the Egyptian intelligence services, Egyptian anchorwoman Noha Darwish announced the news of the death of former President Mohamed Morsi on the Extra News Channel, signing off from her report, “sent from a Samsung device”.

At that time, most of the media knew that the man who holds the Samsung device, the news messenger, is the intelligence officer in charge of managing the media in Egypt, Ahmed Shaaban, through a group on WhatsApp.

Every morning Shaaban grabs his phone and types commands to the media, whether audio-visual or written on that WhatsApp group. Those commands could be, for example, “intensify the attack on the Turkish president” or “do not discuss the Sudanese issue.”

For that reason, no one can violate what is said, says a member of that WhatsApp group. Subsequently, the young intelligence officer became the one who controls most of the media outlets through his Samsung device.

Twenty-one years ago, Shaaban graduated from the Air Defence College in the 95th class to join the reconnaissance apparatus of the Egyptian Military Intelligence Department. In 2013, as the next defence minister from the Military Intelligence Department was set to take over as president, being pushed and supported by many army and intelligence officers, “Shaaban was number four in the presidential campaign after al-Sisi, Abbas Kamel and former military spokesman Ahmed Ali,” said one member of the campaign.

After al-Sisi and Abbas left the Ministry of Defence to the presidential palace, Shaaban, who is much younger and born in 1981, was with them in the Egyptian Community Control Team as the first assistant to Abbas who had been became the Director of the Office of the President of the Republic before moving to the General Intelligence Service, taking Shaaban with him as director of his office. He was responsible for several sensitive and important files, including controlling the Egyptian media and the occupation of the octopus/media body.

Along with his project to control the entire state through administrative arms, he won the admiration of al-Sisi for one of his most important projects, the Presidential Programme for the Rehabilitation of Youth, which was more like the vanguard organisation of the Nasserite era, which qualifies carefully selected young people to be loyal to the political leadership to run ministries and state departments and act as informants against dissident elements.

Not surprisingly, conspiracy theories, distortion, skepticism of the January Revolution supporters and symbols, have dominated the Egyptian media since al-Sisi took office. It is itself the doctrine of the mastermind of the media who did not hide his hostility, but continued to spread it through his personal page, which is filled with hatred. Moreover, his posts contain a lot of accusations and hostility to the symbols of the January 25 revolution.

For example, in 2013, he mentioned the siblings Alaa and Mona Seif on his Facebook page. He said they are atheists and do not believe in God, accusing them of spreading lies and rumours and assaulting the armed forces. Because of those charges, Alaa was imprisoned for five years and then returned to prison shortly after his release on the same charges.

In 2012, Shaaban published another post calling several politicians and media workers enemies, including Dr. Mohamed ElBaradei, who left Egypt and is no longer allowed to return, as well as Belal Fadl, who was also pursued and eventually exiled. Also included was Alaa Al-Aswany against whom several lawsuits have been brought for opposing the regime.

Several other figures have been abused by the regime as well. Another post by Shaaban mocked the politician and former MP Ziad al-Alimi, who is currently imprisoned under the Hope Alliance case.

He also published videos and pictures promoting conspiracy theories and accusing the January Revolution of being a Western workmanship. He also mentioned Serbia’s alleged role in the revolution. He never forgets the January 25 Revolution, especially the January 28 protests when the regime’s security and intelligence organs were stormed.

Besides these delusions, ignorance controls a large part of Ahmed Shaaban’s mind. That ignorance is often mixed with patriotic propaganda and glorification of the Egyptian army through lies and myths that are commonly used to sharpen the loyalty of officers and soldiers to lead the institution and turn a blind eye to all their mistakes.

On the anniversary of the attack on the World Trade Towers on September 11 he said “that day was the inauguration of the Samuel Huntington project, the Clash of Civilizations,” indicating that the Arab Spring was part of this project. Egypt, however, was able to confront it as its army fixed what was spoiled by the Arab Spring.

In addition, a post of him with lots of quotes referring to how great the Egyptian army is along with Hitler and Napoleon, illustrates nothing but ignorance.

After the news that Shaaban left Egypt, many people shared a post from an unknown account under the name “Nora Azmy” in which he/she listed a lot of what he/she said was “the truth of the son of the state.”

It is the pseudonym that Shaaban was writing his articles under in several Egyptian newspapers. The account reported that Shaaban raked in millions of dollars through suspicious deals, bribes, and by participating in antiquities trading that he transferred to accounts in Greece, Italy and Cyprus, and real estate worth millions.

Yet a campaign of ‘Solidarity with Shaaban’ showed a bold front on media outlets and many politicians affiliated with him.

Several years ago, Shaaban was the fourth man in the Egyptian regime after President al-Sisi and his chief of intelligence, Abbas Kamel. Later al-Sisi’s son Mahmoud was semi-controlling the security services and controlling politics, economics, security and foreign affairs.

That position made Shaaban a force to be reckoned with, especially in the media sector that was under his control which also meant he had many opponents. Those opponents received news of his removal with a warm welcome and great joy, especially given that the news indicates he is being investigated over financial issues wherein he was forced to return tens of millions of pounds until the investigation is over.

In the pandemic: Egyptians stranded abroad with the government disabled

Necromancy, sorcery, and tarot: The media’s weapons against Erdogan