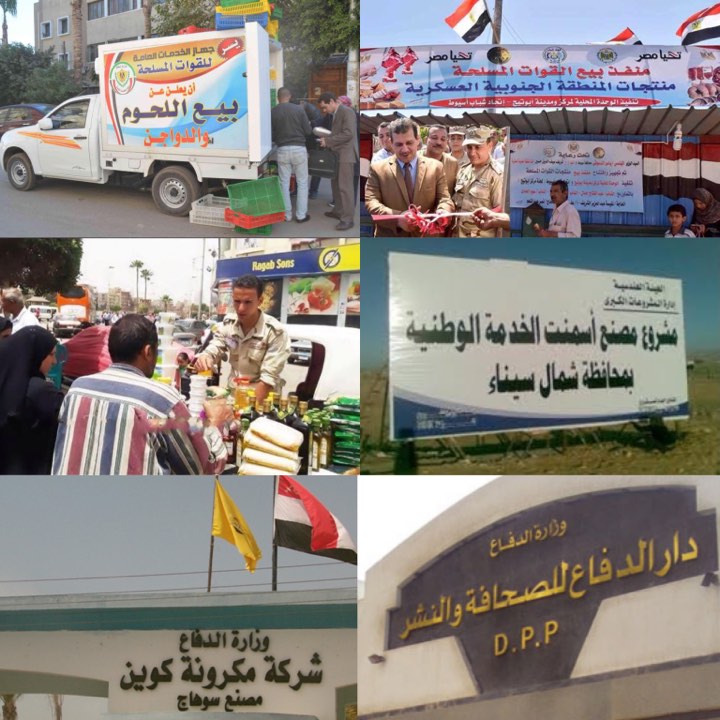 In October 2016, Egyptian President Abdel Fattah al-Sisi said that the
volume of economic activities of the Egyptian armed forces ranges
between 1 and 1.5 per cent of Egypt’s gross domestic product. Yet this
contradicts many international estimates that range between 25 and 60
per cent. However, the grave danger is that the military is an economic
institution where business matters more than war, according to a recent
Carnegie Institute study.
In his recent study, entitled “Owners of the Republic: An Anatomy of
Egypt’s Military Economy,” Dr. Yazid Sayegh, senior researcher at the
Carnegie Institute in the Middle East, says that there are many
estimates of the size of the Egyptian military economy as a result of the
lack of transparency and ambiguity surrounding the foundation’s
activities. However, according to the estimates of his studies, 25 per cent
of the work is the size that formal work constitutes in economic
activities, rather than other informal activities such as those managed
by retired officers. Yet according to the estimation of the Egyptian
Ministry of Finance, the Egyptian gross domestic product for the fiscal
year 2019/2020 is EGP 6.163 trillion ($385.187 billion). That is, the
official activity of the army is more than $96 billion. Colonel Tamer al-
Rifai, the spokesperson for the armed forces, said on television that the
armed forces are overseeing the implementation of 2,300 projects
involving more than 5 million civil servants and workers among
engineers, technicians and workers in all disciplines.
The debate around the economy of the Egyptian army and its impact on
competitiveness and investment opportunities and the ability of the
public and private sectors to operate freely within Egypt dates back to
the years before the January 2011 revolution. However, Sayegh points to
the substantial variations in this point, explaining that before 2011 the
army was an economic player with preferential advantages but after
2013, it became an official engine and a major participant in shaping
Egyptian economic policies for all sectors, especially those in which it
participates, giving no mind to the impact of these policies on the
economy. The study also mentioned the cement industry as an example.
The military production of cement before 2011 was 0 per cent. However,
its production rate before July 2013 was about three per cent, while its

percentage of the total productive capacity of cement in 2018 was 23 per
cent. However, the market did not absorb all these quantities, which led
to losses in the industry. A statement by the head of the Building
Materials Division of the Egyptian Chamber of Commerce mentioned
that there is a surplus of production in the cement sector, amounting to
33 million tons, which amounts to approximately 40 per cent of the total
production.
The study also indicates that the formal military economic sector has
expanded significantly horizontally through engaging in new sectors
such as foodstuffs, household appliances, chemical industries, gold
mining, steel production, religious endowment management, Hajj and
many others.
In addition, thousands of senior retired officers benefited from the
overwhelming political influence of the military establishment in
occupying high positions throughout the civil apparatus of the state and
public sector companies besides exploiting the institution itself to seize
supply and works contracts for ministries through unequal competition
with the public and private sectors.
The best example of this is the Ministry of Military Production, whose
losses reached 134 per cent before 2013. Yet its profits increased within
one year (2016) to 230 per cent. This is not only a fictitious percentage
that is not even achieved by the largest companies in the world, but this
jump was not a consequence of developing and contributing to
increasing the added value of the national economy, rather by seizing
contracts for supply, purchase and works from other public and private
entities. This is not because of the quality or competitive prices, but
rather thanks to the political influence that enabled the powerful
military production minister, Muhammad al-Assar, to sign notes with
35 government ministries, authorities, and governorates, the most
famous of which was the management of the “smart cards” programme,
which aims to direct government subsidies towards the poorest sectors
in Egypt.
Besides the Sayegh study on the formal military economy, there are
huge sectors in which entities and personalities that have been affiliated
with the military establishment have entered informally, such as the
media, film and dramatic production sector. There is also the energy
sector in which a subsidiary of General Intelligence entered and became
responsible for importing gas from Israel, up to monopolising meat

imports from abroad. In addition to the acquisition of vast areas of land
by the military establishment in accordance with a presidential decree
that gave the army the right to manage all non-agricultural or invested
land, which amounts to approximately 87 per cent of Egypt.
What is worth paying attention to while putting the economic affairs of
the armed forces into account is that the institution, and its different
arms (the National Service Projects Authority, the Ministry of Military
Production, the Arab Organisation for Industrialisation, the
Engineering Authority of the Armed Forces), are exempt from taxes,
customs, fees and other state revenues. At a time when its economic
activities are not subject to any civil control or financial scrutiny, nor
linked to the state budget (except for the Ministry of Military
Production) wherein most of it goes to the legendary fund of the
Egyptian army, which no one knows its value or how it is being
managed.
Al-Sisi himself referred to this in August 2016, saying that the armed
forces have been operating outside the public budget for 25 years.
Meanwhile, the other part goes to the higher and middle leaders in the
institution as commissions, bribes and gratuities. All these many
billions are absent from the state administration, while nearly 32 per
cent of Egyptians suffer from extreme poverty and 60 per cent of them
are swinging on the poverty line.
The most dangerous aspect of the issue of the army’s economy lies in the
extent of the military establishment’s preoccupation with this huge
economic empire over its primary and essential mission to protect and
defend the country. This is what researcher Yazid Sayegh said he spoke
about with the American military leaders responsible for military aid to
Egypt, who told him literally that they do not deal with the Egyptian
army as a fighting force.
Alongside that military empire, al-Sisi engaged the armed forces to
formally solve politics through recent constitutional amendments by
making them the guardian of the state. This prompted Sayegh to
compare the current situation of the Egyptian army to his situation on
the eve of the 1967 defeat, and to liken al-Sisi to the former army
commander Abdel Hakim Amer.

Adaptation instead of confrontation: How has the Egyptian regime’s coronavirus plan...

Why does al-Sisi support the deal of the century? $9 billion...