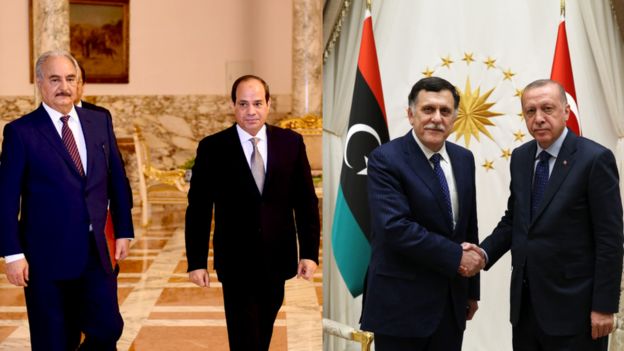 After the Turkish parliament approved sending troops to Libya,
Egypt is concerned, especially that it is in a strategic conflict with
Ankara, not only in relation to the Libyan affair but in a number of
key issues in the region, including exploration in the
Mediterranean.
And it seems that all options are possible for Cairo, where General
Abdel Fattah al-Sisi held a national security meeting with a
number of officials, most notably the Minister of Defence, to
discuss national security files.
The situation has worsened rapidly since Turkish President Recep
Tayyip Erdogan and the head of the internationally recognised
Libyan Government of National Accord (GNA), Fayez al-Sarraj,
signed a security and military cooperation memorandum.
This agreement, which the two parties agreed to activate a few days
ago, is a prelude to the start of Turkish military support for the
Tripoli government, in light of an attack by Haftar forces on the
Libyan capital, which is managed by the GNA.
Observers believe that Cairo has three options that depend on the
evolution of the situation in Libya – the search for international
political support that stops Turkish interference, the increase in
support to Haftar, or direct military intervention.
The managing editor of the Egyptian newspaper Al-Ahram, Ashraf
al-Ashry, believes that Egypt is betting on a political solution to the
Libyan crisis.
He added that “this support could isolate Turkey politically, and
provide a political cover to deal with the Libyan crisis on the other
hand.”
Al-Ashry warned that “Turkish intervention could have
catastrophic repercussions that could lead to [the] fragmentation
of Libya.”

Egypt has already intensified its communications with countries of
the world, most notably al-Sisi’s contact with his American
counterpart Donald Trump and Russia’s Vladimir Putin.
In addition to this, Egyptian arrangements include holding a four-
way summit in Cairo with Egypt, France, Cyprus, and Greece.
Despite the warnings, al-Ashry did not rule out that Egypt would
change its compass in dealing with the Libyan crisis if Turkey
interfered “provocatively” in Libya, according to his statements to
Al-Hurra.
Egypt, about three weeks ago, carried out naval military maneuvers
in the Mediterranean Sea that were, according to al-Ashry, a “very
important message to the Turkish side, that Egypt will not accept
any tampering in the Mediterranean or its western borders.”
Al-Ashry said that the Egyptian escalation against Turkey may be
in the form of intensifying its support for Haftar, and ruled out
sending Egyptian forces to Libya or direct military intervention.
Egypt is closely following Turkey’s attempts to send forces to Libya
and has established an operations room to monitor any Turkish
moves that threaten Egyptian national security, according to al-
Ashry.
On the other hand, the security affairs expert Major General Gamal
Mazloum believes that “Egypt’s military intervention in Libya is
very possible if it encounters a direct threat from Turkey.”
Mazloum said: “There is talk of Egyptian intelligence and logistical
support for Haftar, but if Egypt feels a direct and increasing threat
to its national security, there is no doubt that it will deal with it. I
would not rule out that it [will] interfere militarily.”
Egypt intervened militarily in Libya after terrorist groups executed
21 Christian Egyptians in Libya in 2015.
But that intervention consisted of air strikes, limited intervention,
and was not an open and public war.

Observers fear that if Egypt and Turkey interfered openly in Libya,
the situation would slip into an all-out war.
Egypt has a border length of 1115 kilometres with Libya, and Egypt
has always expressed concern about the deteriorating security
situation in Libya, which allowed some terrorist elements to
infiltrate Egypt.
Egypt accuses Turkey of supporting the Muslim Brotherhood,
which Cairo considers a terrorist group, amid similar accusations
from Haftar to the al-Saraj government of harbouring terror
groups.
On the other hand, Turkey and the GNA in Libya say that Egypt
and Haftar are seeking to establish a military dictatorship and to
suppress any voice of dissent or express the will of the people.
Libya has suffered from militia conflicts and wars since the
overthrow of Muammar Gaddafi’s regime in 2011, especially since
last April when Haftar’s forces launched an offensive to take
control of Tripoli, the headquarters of the GNA.