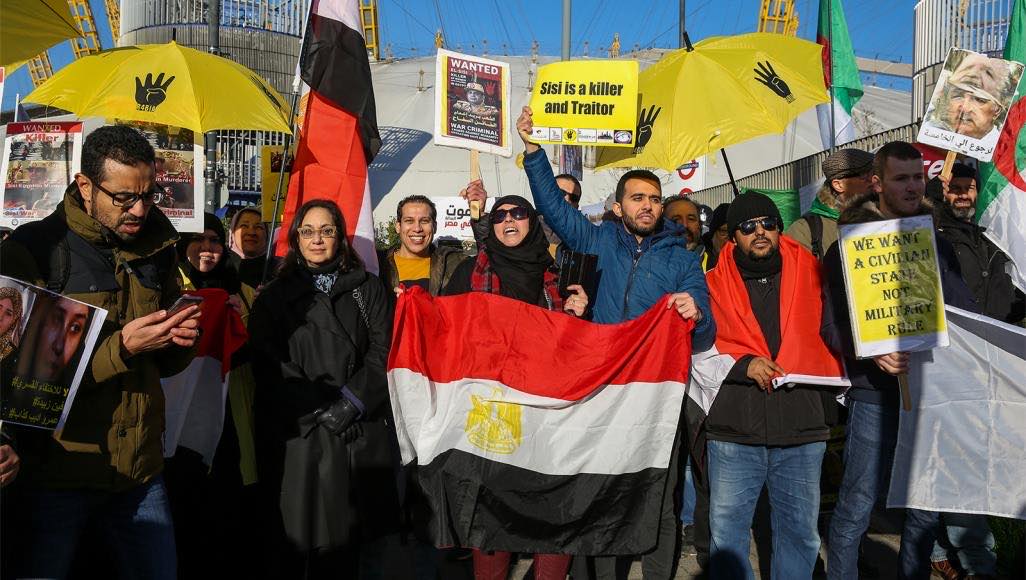 Dozens of Egyptians residing in Britain organised a protest in front of the headquarters of the British-
African investment conference in the capital, London, to protest against the participation of Egyptian
General Abdel Fattah al-Sisi in the conference.
Al-Sisi visited the UK to participate in an investment summit seeking to strengthen ties between London
and African nations.
The protesters pointed out the poor conditions of political detainees in Egypt, raising pictures of the late
Egyptian President Mohamed Morsi and pictures of a number of political detainees who died in
Egyptian prisons because of torture and ill-treatment.
The protesters chanted slogans demanding “to drop the military regime” and the necessity “to restore
the right of the Egyptian opponents, whether arrested or killed, kidnapped or forcibly deported from
their country.”
The protesters told the British government that al-Sisi “does not represent the Egyptian people, but
rather the interests of a corrupt regime.”
They also denounced the UK government seeking to strengthen its economic ties with Egypt with the
aim of diversifying Britain’s economic partners in the post-Brexit era.
President of the Revolutionary Council, Maha Azzam, said that the aim of this protest is to “condemn the
injustice and dictatorship in Egypt and everywhere, and to say to the British government that al-Sisi
does not represent the Egyptian people.”
She demanded UK authorities pay attention to human rights reports that more than 60,000 political
prisoners are in very poor conditions and “dying slowly.”
Azzam stressed that Egyptian opposition forces “insist on pursuing al-Sisi in the international courts and
forums,” stressing that “the investment that Britain wants cannot succeed, because it will be in a corrupt
system that is based on giving wealth to the minority, but the people are getting poorer.”
The same spokeswoman revealed that the Revolutionary Council, through a law firm, lodged a complaint
with the Anti-Terrorism Police Command in the capital, London, calling for an arrest warrant for al-Sisi,
on charges of torture and murder.
In the same vein, a legal chambers in the UK called on judicial authorities to issue an arrest warrant for
the incumbent Egyptian president for his role in the death of Morsi.
In a statement the International Justice Chambers (Guernica 37) urged the London counter-terrorism
units to launch a probe into “credible allegations of torture made against the Egyptian government and
state organs.”
Morsi was ousted in a military coup by al-Sisi in 2013 and died during a trial last June.
The statement went on to say that there was concrete evidence suggesting the military junta’s treatment
killed Morsi and that his death was intentional.
It added that it was unlikely that al-Sisi was unaware of the torture Morsi suffered in prison.
Azzam says that they know al-Sisi enjoys diplomatic immunity, “but it is a message to the world that
there is a determination to pursue al-Sisi, and that there is a legal dossier in the hands of the anti-
terrorist police reveals what al-Sisi committed against the Egyptians.”

Has the military option to solve the Renaissance Dam crisis been...