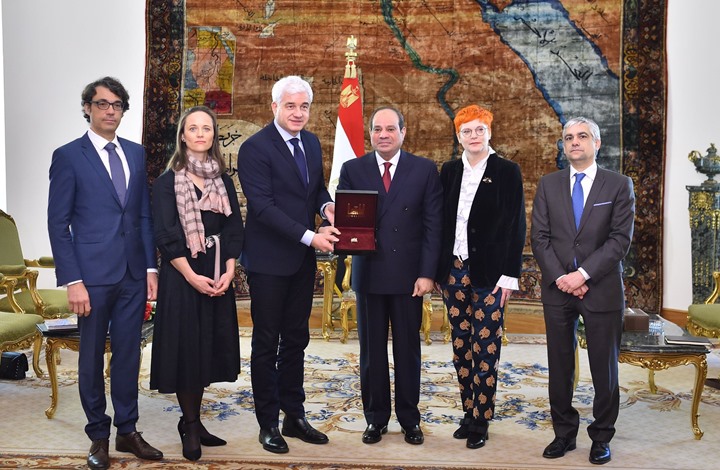 While the Egyptian General Abdel Fattah al-Sisi was preparing to be honoured in Germany with the Order of St George at the Semper Opera Ball, the prestigious prize erupted into a major scandal and the awards ceremony was cancelled. Al-Sisi is accused of overseeing countless human rights abuses since he came to power after ousting his democratically elected predecessor Mohamed Morsi in a 2013 military coup.
Since July 2013, Al-Sisi has led what critics describe as the worst crackdown on human rights in the country’s modern history. The 18-carat gold medal is a symbol of “the triumph of good against evil since the Middle Ages,” according to the event’s website. It is awarded to “those who have, like St. George, been a force for good in the world, despite all opposition – those who swim against the current.”
Semper Opera Ball will host 2,500 guests in its annual ceremony, but its PR agency Zastrow + Zastrow stressed that the awards ceremony traditionally accompanying it has been scrapped. Sharp criticism of the decision to award al-Sisi with the prize began after a delegation from the Opera Ball Association, led by its director Hans-Joachim Frey, visited Cairo on January 26 and presented the award to al-Sisi at the presidential palace. News about the prize quickly sparked a backlash against the event and its organisers, however, al-Sisi had already been handed the prize. Since that time Frey has tried to defend the award as a token of appreciation for what he described as al- Sisi’s role in restoring stability and peace to Egypt and Africa. But this has been denounced by human rights defenders.
Last week, Vanessa Ullrich, an expert at Amnesty International Germany, said that those granting al-Sisi an award have a “responsibility to carefully consider who is the right person to be honoured in public or to be called an outstanding bridge-builder and peacemaker.”
“Under President Abdel Fattah al-Sisi’s government, Egypt is experiencing one of the worst human rights crises in the country’s modern history.” Multiple celebrities who had been invited to the ball have distanced themselves from the event, in the aftermath of what German media described as a “scandal.” The most recent is German billionaire Dietmar Hopp and former Bayern FC president Uli Hoeness. Hopp, who was due to be awarded the same medal as al-Sisi, said on Tuesday he has turned down the award. Hoeness had been chosen to present the award to Hopp, according to the German press agency DPA.
The ceremony’s main host, prominent TV anchor Judith Rakers, said she was pulling out altogether, complaining the Semper Opera Ball had been turned into a political event. Another host, pop singer Roland Kaiser, said he is also considering whether or not he will participate. “I was really looking forward to moderating the Semper Opera Ball alongside Judith Rakers,” he said on Facebook. “The awarding of the Order of St George to the Egyptian ruler Abdel Fattah al-Sisi has turned the cultural event into a political one.” Following Rakers’ withdrawal, her nominated replacement Mareile Hoppner also announced her rejection of the role. She cited the “very justified criticism of the selection of a prize winner” and regretted becoming a target of “the worst hatred and hostility” due to her earlier decision to co-host the event.

Under the pressure of continuing criticism, Frey finally apologised. He said in a statement: “We would like to apologise for the award ceremony and distance ourselves from it. The award ceremony was a mistake.” Frey also said the award will not be part of the Semper Opera Ball programme. Public figures have continued to pull out of the event. Dresden’s mayor, Dirk Hilbert said: “It is inconceivable for me how this honour has come about and which criteria were followed.”