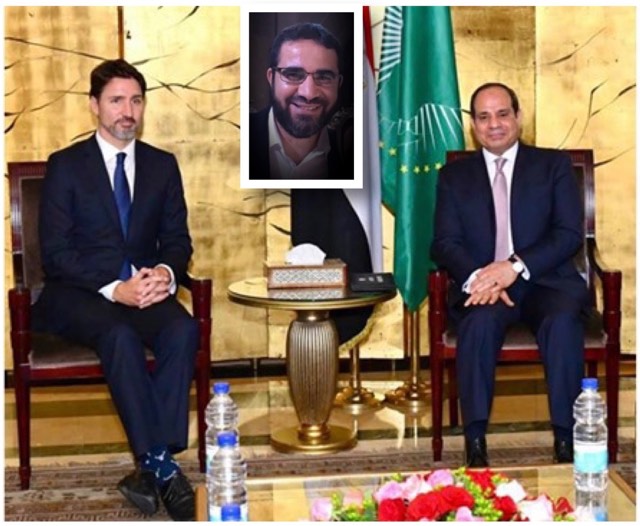 General Abdel Fattah al-Sisi did not expect that Canadian detainee Yasser al-Baz would chase him in Ethiopia while he was attending the African Union summit. Canadian Prime Minister Justin Trudeau raised Yasser’s plight during his meeting with al-Sisi on the sidelines of the African summit. The Canadian Prime Minister arrived in Addis Ababa to meet with a number of African leaders, in an effort to move Canada’s relationship with Africa to new heights, including more economic partnerships and business ties.
Trudeau also acknowledged that Canada’s campaign for one of the 10 non-permanent seats on the Security Council is one of the reasons for the visit. Canada is competing against Norway and Ireland for two spots on the council in a vote that will take place in June. There are 54 African members of the United Nations, more than one fourth of the potential votes for the Security Council’s seats. Canada lost its bid for a seat in 2010, partly due to lacklustre African support. Trudeau has been criticised for his meetings with a number of African leaders known for their human rights violations, including Egypt and Rwanda. Rwandan President Paul Kagame and General al-Sisi have both changed the constitution in their countries to allow them to run for a longer term in office. The Egyptian regime was criticised widely for arbitrarily detaining, torturing and extrajudicially killing people.

Canadian engineer Yasser al-Baz was detained in Cairo for a year on February 18 2018 after he was arrested at the airport at the end of a business trip. He has not been charged with anything. “In all my conversations with every leader, we talked about human rights,” said Trudeau. The Canadian Prime Minister confirmed that he raised the case of Yasser al-Baz with al-Sisi in their private meeting. When the Canadian embassy first asked the Egyptian government about al-Baz, they denied any knowledge of him for several days. At the end of the week, he appeared at a prosecutor’s office for general questioning and was transported to Torah Prison, which is notorious for its human rights violations. Al-Baz remains in Torah Prison. For almost a year, he has been sleeping on a concrete floor without a mattress in a small, crowded cell with 17 men, one washroom and limited ventilation. To this day, al-Baz has never been charged with anything. His arbitrary detention is constantly renewed, without reason. Al-Baz has travelled back and forth to Egypt without any concern for two decades.

His family stressed that he has no affiliation to any groups in Egypt, nor is he politically active. He is a loving father of three and grandfather of two. He owns an engineering firm in Canada and is a prominent, well-respected community leader. Yasser’s family asked Prime Minister Justin Trudeau and Minister of Foreign Affairs Philippe-Francois Champagne, to do everything in his power to bring this Canadian citizen home and reunite him with his family. Over the past years, the cases of several political detainees have been raised with al-Sisi in his meetings with world leaders. Al-Sisi was even criticised by his allies for arresting dual national citizens. Last month, al-Sisi came under criticism from the US for the death of American detainee Mustafa Kassem in the Egyptian regime’s prisons, after a long hunger strike.

Besides Canada, the USA, Germany, Ireland, Canada, Turkey, and even Russia have criticised the Egyptian regime for the arrest of their citizens in Egypt. Italy’s relationship with the Egyptian regime is still tense because of the murder of the young researcher Giulio Regeni four years ago. Observers say that al-Sisi is embarrassed the issue of political prisoners is raised, but he is unable to loosen his grip and release the detainees because he knows that his regime is not popular. Al-Sisi’s regime is trying to paint a mental image that he is strict about criticism and that even the international community will not be able to protect opponents, journalists, or human rights defenders.

Mohamed Beltagy: One of the January Revolution’s forgotten heroes