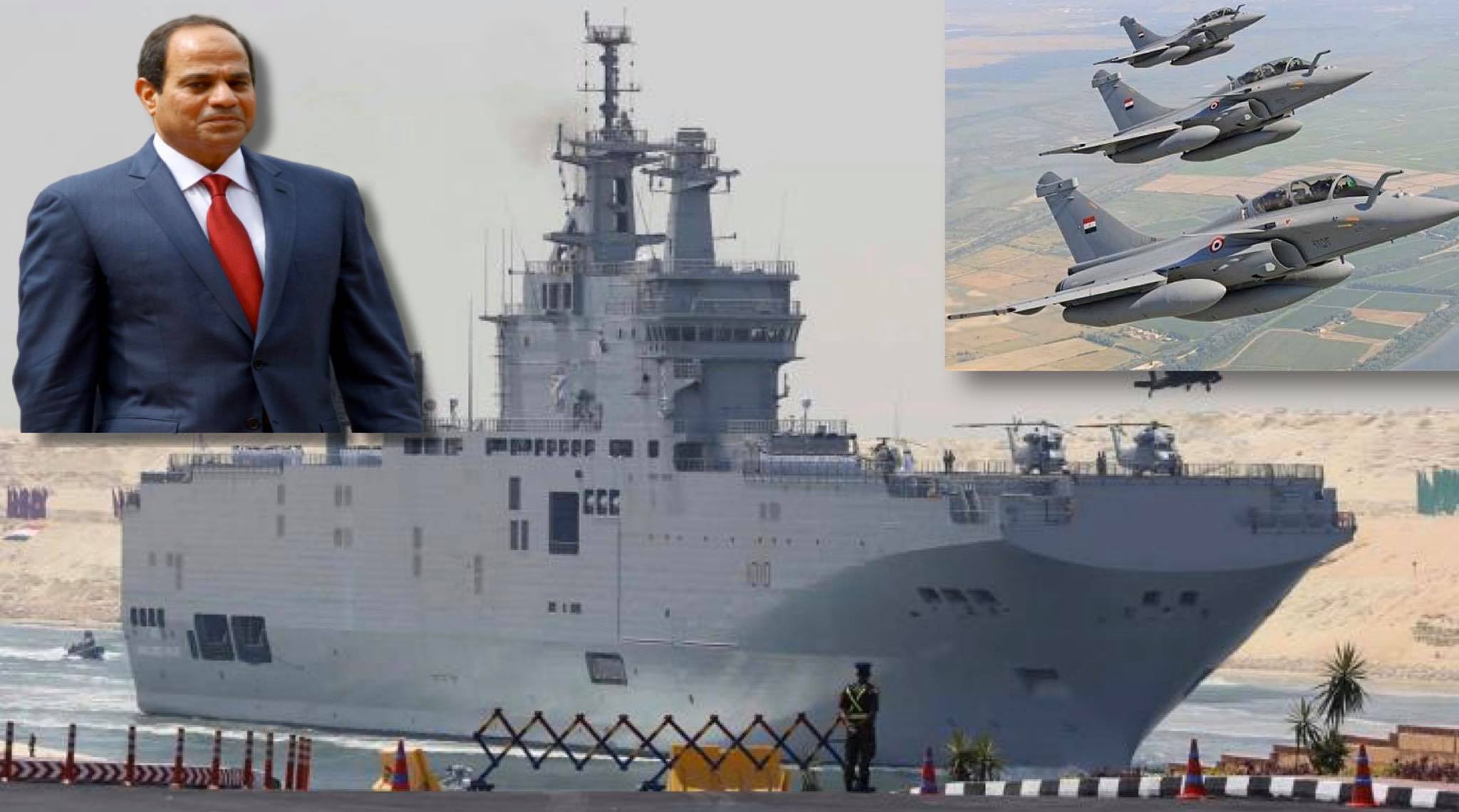 Weapon deals are one of the strongest reasons for the close relationship between Egyptian General Abdel Fattah al-Sisi’s regime and European governments, especially France, Germany, Britain, and Italy. Since al-Sisi came to power in mid-2014, Egypt has spent billions of dollars on weapons deals, and between 2014 and 2018 were third internationally among the largest arms importers, according to the Stockholm International Peace Research Institute.

Many political and strategic motives have been behind Egypt’s transformation into the largest importer of Russian, French and German weapons, and the building of partnerships between al-Sisi and the European Union. Initially, al-Sisi’s greatest concern was securing his legitimacy because he became president after a military coup that toppled the late elected president, Mohamed Morsi, which pushed him to conclude a large number of deals, within a short period of time. In an attempt to open the doors of Europe to Egypt, al-Sisi concluded multi-billion dollar arms deals with European powers, despite the severe budget deficit and the country’s external and internal debt inflation.

According to Human rights organisations, military and economic interests represent the first factor in the West’s relationship with Egypt, where foreign relations are based on financial interests, not human rights issues or democracy. In parallel, al-Sisi has carried out violent attacks in North Sinai and presented himself as the president committed to the anti-terror doctrine. He used these violent attacks to justify the high cost of weapons that Egypt buys and to secure loans for advanced fighter aircraft, modern aircraft carriers, and missile systems. With the expansion of the influence of Sinai Province, the local Egyptian ISIS affiliate, which was considered a threat to the security of the Egyptian-Israeli border, al-Sisi’s plan aligned with European and American interests in strengthening the capabilities of the Egyptian army. In terms of motives behind the weapons deals, the year 2015 witnessed a remarkable shift, from legitimacy and terrorism to the pure desire to appease international allies, due to a series of crises. The most notable of these transformations was the downing of a Russian passenger plane over Sinai with an explosive device, planted by ISIS in the passengers’ bags, which killed all 227 passengers on board, and the subsequent imposition of a Russian and Western flight ban on flights to Egyptian resorts on the Red Sea. As a result, al-Sisi’s regime urgently needed to appease Moscow through massive arms deals in excess of $10 billion, including MiG-29 fighters and T-90 tanks, helicopters, anti-tank cornet missiles, PAC 130 combat training aircraft, and military transport helicopters, and finally, the Su-35 fighters.

The Stockholm International Peace Research Institute estimates that Egypt’s imports of Russian weapons increased by 150 per cent between 2014 and 2018. In 2016, an Egyptian plane coming from Paris to Cairo crashed, killing 65 passengers, which prompted Egypt to try to appease Paris through several huge arms deals, most notably the Rafale fighter planes and the two Mistral aircraft carriers, in addition to a group of advanced frigates and parts. Egypt is the largest importer of French weapons in the region, at 28 per cent over the past four years. The killing of the Italian researcher Giulio Regeni in the same year, amid accusations that Egyptian authorities were involved in torturing him to death, prompted al-Sisi’s regime to buy Italian silence with a number of arms deals. According to a document issued by the Italian Ministry of Foreign Affairs, Egypt achieved a record number of purchases of weapons, ammunition, and Italian security information systems during 2018, exceeding €69 million euros ($75 million). Egypt is awaiting a huge deal from Italy to buy the two frigates for €700 million ($760.5 million), a number of marine weapons, remote monitoring, and management techniques, combat aircraft, and 149 Agusta Westland helicopters.

Al-Sisi succeeded in presenting himself to the Europeans as a policeman to stem the migration flows from the south to the northern Mediterranean, secure the Egyptian-Libyan borders, and prevent new waves of displacement towards Europe. Berlin, the de facto leader of the European Union, maintained a somewhat tough stance toward civil society conditions, political freedoms, and the pursuit of opponents in Egypt, but this attitude gradually eroded with the urgency of stemming the flow of illegal immigration and concluding more arms deals. Egypt’s imports of German weapons during the first half of 2019 amounted to €801.8 ($871 million). During the past five years, German arms exports to Egypt increased by 205 per cent and included four submarines worth €1 billion ($1.1 billion), in addition to 330 air-to-air missiles and other light weapons, personnel carriers and tanks.

From time to time, human rights issues are brought to the negotiating table between Egypt and European partners, but the huge arms deals guarantee that they will be postponed, put aside, or simply be willfully absent. Furthermore, it could be said that the issue of combating illegal immigration is very important in the European Union’s relationship with Egypt, but strong economic ties that constitute huge arms deals tops that. Because Egypt presented itself during al-Sisi’s era as a major importer of arms, European countries and giant arms companies are rushing to win al-Sisi’s support as he is a generous customer. In sum, it appears that al-Sisi eventually succeeded in co-opting the West alongside his regime using military deals and sometimes by exploiting the anti-terror card and the relationship with Israel, as well as the artificial exaggeration of the fears of political Islam and illegal immigration. But weapons deals were the password al-Sisi used to open the closed doors in Europe, which convinced big companies to put pressure on their governments to abandon criticism of human rights in Egypt.