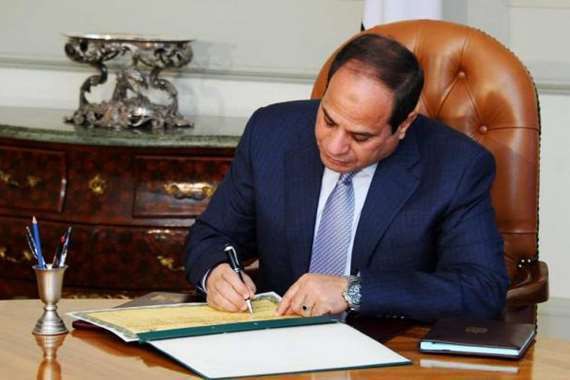 A few days ago, the Official Gazette of Egypt published the names of 135 prisoners who had been pardoned by President Abdel Fattah al-Sisi, on the occasion of the commemoration of the January 25 Revolution and Police Day. The amnesty list included a number of people who had been convicted in political cases, but apparently this was only to cover up the names of 14 policemen who were issued final rulings in cases of torture and the murder of citizens.

The 14 policemen were charged in four different cases, which were either direct killing or torture leading to killing. Their victims were ordinary citizens and had nothing to do with politics. Among these citizens was Ahmed el-Ajami, who was arrested by officers working at Hadayek el-Kobba police station. The head officer, Tamer Farraj, and four other policemen tortured el-Ajami to death in order to force him to confess to theft. The prosecution confirmed that el-Ajami’s detention was illegal because it was carried out without the permission of the prosecution. They “put him on the ground, tied his hands behind his body, beat his feet with sticks, and electrocuted him in various parts of his body and in sensitive places. They did so in order to force him to confess to a theft and guide them to the stolen goods. He ended up dying from torture,” the prosecution said. The prosecution’s examination of the victim’s body revealed that there were injuries all over his body including marks from electric shocks. Also, the prosecution’s examination of the detective room inside the police station revealed that the glass door had been shattered.

The surveillance cameras in the station showed that another victim was detained inside for a period of approximately 24 hours, and was assaulted and tortured to make him confess. It adds that the victim did not resist being arrested and entered the station in good health. Last April, the Cairo Criminal Court sentenced the head officer of Hadayek el-Kobba police station to eight years in prison, and the other four policemen to seven years in prison, but before they had completed a year in prison, al-Sisi issued a presidential pardon for them. Three police officers from Tahta police station tortured a tuk tuk driver to death to confess to a murder, and colluded with the health inspector to prepare a false medical report on the incident by saying that the victim died “as a result of a severe drop in circulation.” After people protested the prosecution were forced to reconsider the forensic report, which was proven false. In February 2019, the Criminal Court sentenced the officers to three years in prison, which is the minimum penalty for torture, and the health inspector was sentenced to one year and dismissal from office for two years. Al-Sisi issued a presidential pardon for two of the officers. In a similar incident, two officers from the Giza police station and four policemen beat and tortured accountant Saad Saeed until he died in their hands. The incident dates back to 2012, when Hisham Rabie, the Giza station’s detective along with four policemen beat and tortured the victim inside his house in front of his family, claiming that he participated in a fight.

In 2017, the Giza Criminal Court sentenced Rabie to five years in prison and Yasser Abd el-Majid, the deputy police chief, to two years. The court gave a three-year prison sentence for the other policemen, but al-Sisi pardoned the two officers and the four policemen before they had completed their sentences. The latest incident is related to officer Mazen Jamal el-Din, who opened fire in an attempt to break up a fight in the Rawd el-Faraj area, killing the student Mohammed Rifai, with a bullet to the chest and wounding his colleague Ali Samir. In March 2019 the Court of Cassation sentenced the officer to six years in prison, but al-Sisi pardoned him. This is not the first time that the regime has pardoned officers and policemen who killed and tortured citizens. In May 2019, al-Sisi pardoned nine officers who killed four members of the same family by ‘mistake,’ and who were sentenced to seven years in prison.

The Olympic Games reveals that Egypt is a country that expels...

A new step towards internationalization: Egypt complains Ethiopia to the Security...