EgyptWatch
Home Reports Why does the world not believe the Egyptian regime about coronavirus? 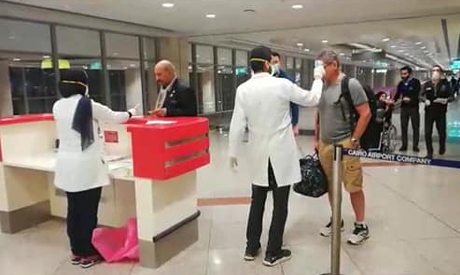 The Egyptian Minister of Health has maintained that Egypt is completely free from coronavirus infections, and confirmed that her ministry had examined 1,443 people suspected of catching the virus, and that it had found no positive result except in only one case that was cured later. Nobody in the world seems to believe the minister’s words. The minister’s statements coincided with declarations of at least three countries to prevent Egyptians from entering their countries. This came after France announced the arrival of six of its citizens who had been infected with the new coronavirus after a trip to Egypt, and Canada also announced the arrival of one of its citizens which had been infected with the virus also from a trip in Egypt. Besides France and Canada, Taiwan and China also announced the arrival of citizens infected with coronavirus coming from Egypt. Nevertheless, the Egyptian Ministry of Health denied that there are any cases of coronavirus infection in Egypt, and did not explain how these infected cases arrived from Egypt. Kuwait, Qatar, and Angola decided to prevent the entry of Egyptians. Most countries around the world have imposed strict checks on Egyptians.

Journalists loyal to the Egyptian regime began accusing the countries that discovered coronavirus in their citizens returning from Egypt of conspiring against Egypt to destroy tourism and the economy. TV channels have broadcast statements by General Abdel Fattah al-Sisi about the “evil people” who hate the Egyptian regime’s success. Besides the cases of citizens returning from Egypt being confirmed as having the virus, the Egyptian regime has a history of denying reality. The Egyptian regime turns every issue into a political issue, and accuses those who acknowledge the existence of the problem, or who demand to solve it, of being hired and funded from abroad, and accuse them of working for foreigners. For example, the world knows that there are over 60,000 political prisoners in Egypt and that all detainees in Egypt are subjected to ill-treatment, medical neglect, and sometimes torture to the point of death.

International human rights organisations called for resolving and ending this crisis, releasing political detainees and improving prison conditions. On the other hand, General Abdel Fattah al-Sisi has insisted that there is no single political prisoner in Egypt. Al-Sisi claimed that all those in Egyptian prisons are in fact criminals convicted in criminal cases. Although al-Sisi’s statements seemed funny to human rights organisations, it seemed as though the Egyptian regime believed its own lie. In a dramatic shift, the Egyptian regime has attacked all human rights organisations that say there are political detainees in Egypt, and accused organisations such as Amnesty International and Human Rights Watch of working for opposition groups such as the Muslim Brotherhood. Denial is nothing new, it appears that the Egyptian regime learned this from Hosni Mubarak’s era. In the late Mubarak era, during the Egyptian revolution in January 2011, dozens of protesters were killed as they called for the fall of the Mubarak regime. Mubarak’s regime completely denied responsibility for killing demonstrators with snipers, and the Ministry of Interior issued a statement saying that its forces did not possess snipers, live bullets, or deadly toxic bombs.

The story of the Egyptian regime was difficult to believe, especially with the dead protesters’ bodies. The Egyptian regime at the time said there was a third party that killed the protesters, but it did not explain who this third party was, or why it killed the protesters. The Egyptian regime’s story at the time was illogical and unacceptable, but it also stuck to the denial that snipers existed. Egyptians consider the policy of denial a method that the Egyptian regime always uses, to the point that many Egyptians are aware of the government’s intention to raise the prices of commodities or transportation whilst officials deny it in newspapers and on TV channels. The problem is that this time the world will not accept the Egyptian regime’s lies. If governments are ready to ignore the issue of human rights and freedoms in Egypt, as it is not a harmful issue for them, then this time they are not ready to tolerate coronavirus infections coming from Egypt.