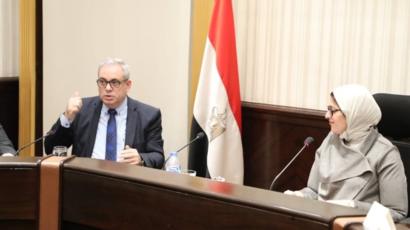 The Ministry of Health and Population and the World Health Organization announced, on Thursday, the discovery of the first case of an Egyptian citizen with the new Corona virus (Covid – 19). Dr. Khalid Mujahid, the Ministry’s official spokesman, stated that the discovered case is a 44-year-old Egyptian citizen returned to Egypt from Serbia through France “transit” for 12 hours, and after a few days after his return he began to show minor symptoms, so he went to the hospital, and performed investigations that proved that he was infected with the Corona virus, and he is being transferred to the Isolation Hospital in Matrouh to receive the necessary medical care. “The ministry is currently working to take strict preventive measures against those who were in contact with the case, by performing the diagnostic tests for the virus,” Mujahid added.

Egypt had previously reported two cases of coronavirus infection for two foreigners, the first case recovered, while the second is still receiving treatment in the isolation hospital in Matrouh.

Egypt intends to sell 3,700 state assets to pay off debt