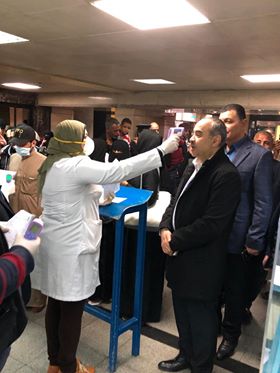 The Egyptian Ministry of Health has announced the registration of the first death of coronaviruses of a German citizen in a hospital in the Red Sea Governorate in eastern Egypt, meaning that he died outside the hospital designated for medical isolation (western Egypt). The Egyptian Ministry of Health did not announce the closure or isolation of the hospital before the patient’s death, meaning that the hospital was open to the public, and it was not clear how if the patient was isolated in one aspect of the hospital that the rest of the patients cannot reach or mix with him. A statement by the Ministry stated that the German citizen, aged 60 years, had symptoms of high temperature when he arrived from Luxor Governorate to Hurghada, and he went to Hurghada General Hospital last Friday to receive medical care. Khaled Mujahid, a ministry spokesman, added that the tests indicated that his infection was positive, that he was infected with Coronavirus, and that he was placed in intensive care because he was suffering from respiratory failure caused by acute pneumonia. The spokesman confirmed that the necessary precautions had been taken, the hospital sterilized and disinfected, according to the guidelines of the World Health Organization.

In the same context, the Saudi authorities imposed a temporary suspension on the travel of citizens and residents there to and from nine countries, in order to control the new Coronavirus, and prevent its entry into and spread of the country. The Saudi News Agency mentioned that the nine countries are: Egypt, the UAE, Kuwait, Bahrain, Lebanon, Syria, South Korea, Italy, and Iraq. The decision also included a ban on anyone, who had been present in any of these countries, during the past 14 days, to enter Saudi Arabia. The Kingdom also decided to stop air and sea flights between the Kingdom and the mentioned countries. In coinciding with that decision, the Israeli border and border authorities closed, on Sunday, the Taba crossing, the only land crossing between them and Egypt, for fear of transmitting the Coronavirus from Egypt to Israeli tourists. Israel has not set a date for reopening the crossing again, saying only that it is valid from Sunday evening until further notice. Israeli tourism companies have received an official notification of the Israeli government’s intention to close the Taba land crossing from five o’clock on Sunday until further notice, as part of efforts to limit the spread of the virus, according to Hebrew Channel Seven. In the same context, the Israeli Ministry of Health announced on Sunday that quarantine has been imposed on everyone who returned from Egypt in the past two weeks. Saudi Arabia and Israel join Kuwait and Qatar, which previously imposed a ban on Egyptians entering their territories for the same reason.

Although officially recorded cases of infection in Egypt amount to only 59 cases, a number of countries announced the discovery of dozens of injuries from returnees from trips to Egypt. These infections raised deep doubts about the health system in Egypt, especially in light of media leaks that talked about the Egyptian regime hiding the true number of coronavirus infections. Leaks say many coronavirus cases are not subject to quarantine, and they are classified as common influenza infections. Opponents say that there are also deaths that have not been recorded as having coronavirus infections. What increases the suspicions about the Egyptian health system, the statement of the Egyptian Minister of Health, Hala Zayed, that the cases infected with the new coronavirus in Egypt are treated by antibiotics and antipyretics. The statements, reported by local media, have sparked widespread controversy, especially since it is known to any doctor that antibiotics have nothing to do with viral treatment.

In an attempt to reassure the Egyptians, Egyptian Prime Minister Moustafa Madbouly said that the government has tightened procedures for screening and sterilizing airports, and that there is an official directive to take care of hygiene in public places and facilities and educate citizens about the importance of this. Madbouly added that the government worked to provide advanced rapid detection technology in airports that will arrive in the country on Tuesday, and allow detection of the Coronavirus within 30 minutes. The Egyptian Prime Minister also stated that his country is one of the first countries to use this technology, praising the quarantine doctors who are making intensive efforts at airports and ports to check arrivals and confront the virus. Madbouly’s statements came after activists spoke on social media that the Egyptian airports (with the exception of Cairo Airport) were not witnessing any medical examination for those coming from abroad. But the problem is that the Egyptian health system does not suffer from widespread suspicions only in airports, or in quarantine procedures only, but in almost all aspects.

Loan addiction in Egypt: The regime resorts to the IMF again