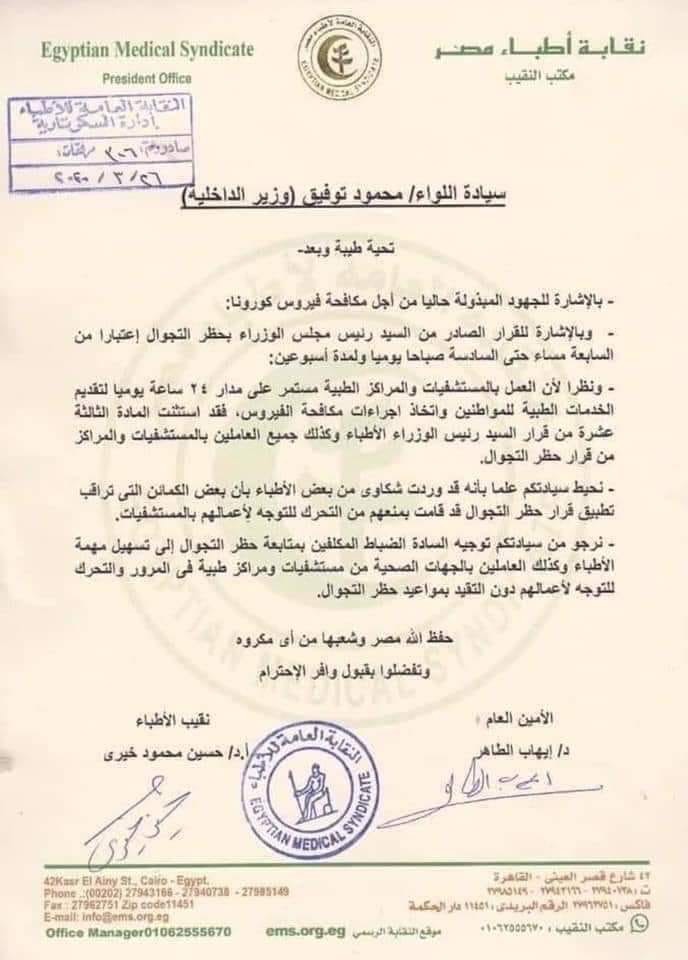 At 2.30pm on Thursday March 19 a force from the National Security Agency in Alexandria, the second largest city in Egypt, stormed the house of a doctor because of a Facebook post. This has been done thousands of times in Egypt during the mandate of General Abdel Fattah al-Sisi, but what is new and unfortunate in this case is that the post for which the doctor was arrested was not opposing al-Sisi, but rather a complaint about the lack of medical supplies in the hospital where he works. Medical and legal sources revealed to Egypt Watch the details of the incident. The arrested doctor, Muhammad Hamid, works in the Gamal Abdel Nasser Public Hospital in Alexandria, and the reason for his arrest is a security report written about his Facebook posts, which criticise the Ministry of Health. Hours before his arrest, the doctor had written on his personal page a complaint about the lack of N95 masks, needed to protect doctors from getting coronavirus, in the hospital where he works. The sources added that the public prosecution conducted an investigation into the doctor on charges of joining a banned group, publishing false news and several other charges that are usually directed against political opponents. He was then remanded in custody for 15 days. Egypt Watch was informed that the Egyptian Medical Syndicate tried to interfere in the case, but the arrested doctor’s family refused this in order not to provoke the authorities.

The regime gives with one hand and takes with the other
On March 29 the president announced rewards for doctors who work in quarantines and hospitals assigned to treating coronavirus cases, and a general 75 per cent increase in the allowance paid to medical professionals. But this isn’t the full image of how doctors are treated by the regime in Egypt. In fact, doctors operate without protective supplies, necessary materials, and in inhuman conditions. A source from the Doctors Syndicate told Egypt Watch that the number of medics infected by the virus exceeds 30. Egyptian doctors have lived an unfortunate reality for decades, but these conditions have become extremely bad since al-Sisi assumed the presidency. The source says that the doctors’ salaries have not increased almost since 2014 due to the law that the government put in place in 2015, which made the increase in doctors’ salaries only an increase in their basic salary that represents the smallest part of their income. The source also clarified that the average salary of a newly graduated doctor in Egypt is about EGP 2,500 ($159), and their basic salary ranges only between EGP 200 and 300 ($13 and $19). It is worth noting that the infectious disease allowance for medical staff in Egypt is EGP 19 ($1), while the same allowance is several times that number for other categories such as banking sector employees, EGP 500 ($32) and judges, EGP 3,000 ($191). The Egyptian Medical Syndicate has fought a long battle with successive Egyptian governments to increase doctors’ salaries and wages since 2011. In 2014, it filed a lawsuit against the Ministry of Health to increase the infectious disease allowance to EGP 1,000 ($64). After the Administrative Court decided that the doctors were entitled to this increase, the government appealed the ruling, and after the appeal was rejected, the government filed another one in the Supreme Administrative Court, which canceled the initial ruling. This shows the extent of the abuse faced by doctors in Egypt. The source adds that many of the promises and publicity promoted by the Ministry of Health regarding adjusting doctors’ conditions are mere propaganda. The Comprehensive Health Insurance, which the ministry said was a solution to the wage problem, is irrelevant, because a large part of the wages is linked to the direct evaluation of the chief and arbitrary actions against doctors. Additionally, the sums the ministry said it would pay to doctors in quarantine hospitals – EGP 20,000 ($1,272) – were false, too, according to the source. This amount is the maximum for consultants and not for doctors, and it turned out that salaries of young doctors serving in quarantine hospitals do not exceed EGP 9,000 ($572). Moreover, the ministry has opened the door to volunteering to circumvent and not increase health allowances. This is at a time when many hospitals suffer from a lack of infection control supplies such as medical masks, gloves and goggles. The source also drew attention to the obstinacy that doctors face when it comes to holidays, as the ministry has refused to give leave to all doctors, even those to whom the protocol applies, such as pregnant female doctors, the elderly or patients with chronic diseases that reduce immunity. This exposes Egyptian doctors to the risk of infection with coronavirus. In fact, positive cases of patients and some medical staff have been discovered in Al-Munirah and Damietta Hospitals.

When it comes to doctors, police don’t know the law
Apart from all of that are the attacks on doctors and medical staff by patients’ families protesting the lack of supplies and services available to them. Doctors face this without any protection from the police. On the contrary, police usually attack doctors and try to impose their authority in hospitals. The most known of these incidents was the attack by a number of police secretaries on the doctors of El-Matareya Hospital. Recently, Egypt Watch received a document directed by EMS to the Minister of Interior General Mahmoud Tawfik. The document is a complaint that the police are stopping doctors during the curfew despite the exception announced by the prime minister. This prevents doctors from attending their night shifts at the hospitals. Such poor conditions have led thousands of doctors to resign from the ministry. The Medical Syndicate indicated at the beginning of this year that there are 10,000 doctors who have resigned from the Ministry of Health during the past five years, and that in 2019 alone, 3,500 Egyptian doctors resigned. Some of them went to private clinics and hospitals, while the largest part left Egypt. It is worth noting that al-Sisi has approved a support plan to confront the coronavirus pandemic in Egypt, at an amount of EGP 100 billion ($6.4 billion). The percentage allocated to health support amounts to one per cent of this amount, while it was decided to support the Egyptian Stock Exchange to face the economic consequences of the epidemic with EGP 20 billion ($1.3 billion), or 20 times what was allocated to the health sector that is fighting the war against coronavirus.

Egyptian political opponents in Sudan face the threat of deportation