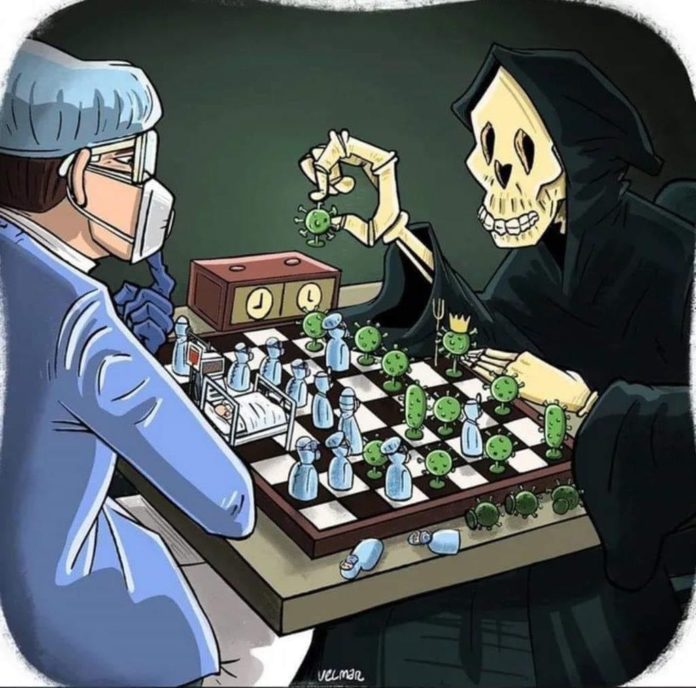 Perhaps April 3 has been the most dangerous day since the start of the spread of COVID-19 in Egypt because it is the day one of the highest daily infection cases was recorded. It is also the day 17 infected cases were reported among the National Cancer Institute’s medical team. The entire world has declared a state of emergency, a complete shutdown and home isolation so that health systems do not collapse, which would result in even more deaths of patients who suffer from coronavirus or any other diseases. Official reports confirm that 10 per cent of virus carriers until now are medics and two doctors and a nurse have died. The National Cancer Institute is one of the most critical hospitals that provides health care for thousands of cancer patients daily – now it’s out of service and the virus has spread among its medical team.

What happened inside the National Cancer Institute?
Director of the institute, Doctor Hatem Aboul Kasim, announced on TV that 15 of the institute’s medical team tested positive with COVID-19; four doctors and 11 nursing staff. Then the number increased to 17. Aboul Kasim indicated that a nurse who works for a private hospital transmitted the virus to his colleagues. Aboul Kasim added that he shut down the institute for three days to sterilise it and isolated the positive cases. What the director of the institute said totally contradicts his previous statements to Youm7 last Monday, when he denied the existence of any suspected cases whether from the patients or the staff, and emphasised taking precautionary measures to prevent the spread of the virus in the hospital.

In Egypt: Look for the responsible person
There is no crisis in Egypt without officials who rush to deny their personal responsibility and direct accusations against their employees, who they say are lazy and irresponsible. Either this or they emphasise that the crisis is something normal which cannot be avoided. When it comes to investigations, you’ll find the majority of crises are avoidable. Aboul Kasim’s statements have been denied by medics working at the institute as some of them warned about the crisis one week before on their social media accounts. A doctor who works for the institute confirmed that the index case was a patient who was admitted for surgery. She exhibited the symptoms, so the doctors and nursing staff asked the department head to isolate and test her. He refused and threatened the nursing staff with dismissal if they didn’t proceed with their work. One nurse told local newspapers last Tuesday that the infection transmitted from the patient to the responsible nurse. He was asked him to isolate himself in his house for 14 days and blamed for bringing the virus in from a private hospital. The rest of the nursing staff gathered in front of Aboul Kasim’s office and demanded to be tested, especially as they were in contact with their infected colleague and the index case, but Aboul Kasim refused to perform the tests or let them go into isolation. He discharged all the patients from the department and shut it down. After the nurse tested positive for COVID-19, Aboul Kasim performed the tests. After it seemed that there would be an outbreak in the institute, a group of doctors and pharmacists rushed to meet the director last Thursday and demanded the institute be shut down and the medical staff be isolated, but he refused and threatened anyone who is absent with unfair dismissal. It has now been announced that 17 people have been infected, yet nobody knows the real number and whether the virus was passed on to the cancer patients and their families. Official statistics released by the Ministry of Health said that the number of infected among the medical teams on April 2 was 81 cases, in addition to 17 cases from the cancer institute, which makes the total number 98, which is around 10 per cent of the total cases. It’s a looming catastrophe. The percentage is similar to Italy and Spain, where about 10 per cent of medical staff have been infected with the virus. This percentage may be duplicated in Egypt where the doctors work without real protection as prevention kits, masks and gloves are absent from most of the hospitals. Doctors and medical staff haven’t been trained on prevention and infection control rules. The majority of health institutes in Egypt have no infection control or protection systems to protect medical teams.

Do doctors work in Egypt without protection?
Last week, the Egyptian Medical Syndicate issued an official statement demanding the Ministry of Health protect medical staff, provide them with protection equipment, sterilise and disinfect hospitals, and perform early tests if there is a suspected case among the medical staff. Doctor Ehab Taher, the general secretary of the syndicate, said that they have received hundreds of messages sent by doctors complaining about the shortage of prevention kits inside the hospitals. Some of them complained about being forced to work without protection and being threatened with dismissal if they complain or refuse to work without protection. In a similar vein, the nursing staff at Imbaba Fever Hospital, one of the quarantine hospitals, organised a protest after one of them was infected with the virus. The nurses complained about the lack of precautionary measures and that they were allowed to go on working without protection. One of the doctors wrote on Facebook: “We don’t want them to call us the white army or cheer us on, all we want is to work under safe and fair conditions and be provided with preventive kits to protect ourselves and our families.”