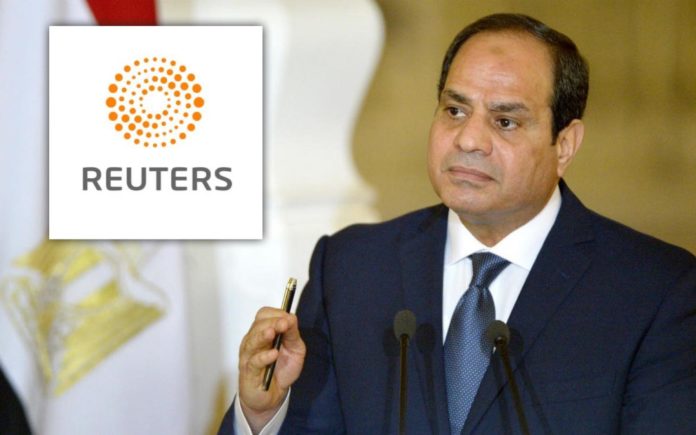 After a long list of Egyptian and foreign media being targeted by the regime of General Abdel Fattah al-Sisi, it appears that the regime’s fire this time is directed against one of the most famous international news agencies, Reuters.

An Egyptian officer has filed a lawsuit against Reuters, accusing its Cairo office of publishing his picture as part of a televised report “promoting lies.” In his lawsuit papers, the commander of the Central Security Forces, Ayman Omar, said that Reuters published his picture as part of a report with the intention of “promoting lies that were fabricated by the agency,” in a report about “state control of the media.” The agency used the image of the officer as an expressive image, and no act or participation in controlling the media was attributed to him, but the officer considered that Reuters had no right to photograph him without prior permission, even if he was on the street and as a general expressive image. The officer said that the agency photographed him without reference, and without right.

The lawsuit indicated that the complainant works in the Central Security Sector at the Ministry of Interior, and has nothing to do with the media, and that the agency published his image in a report aimed at “destroying the Egyptian state.” The Reuters report did not mention Major Ayman Omar. Observers say that Reuters did not use the image of the officer in an accusatory way, but just as pedestrians are portrayed in the streets, as are police, doctors, teachers or students. It was an expressive image and is not considered defamation.

The controversial lawyer Samir Sabry, who was appointed by the officer to follow up on the case, said that the lawsuit demands the closure of the Reuters office in Cairo because of the insult to Egypt. Sabry has previously filed a lawsuit to close the BBC office in Egypt. Sabry and other controversial lawyers have been filing complaints and cases against opponents, public figures, journalists, politicians, and foreign media.

Opponents see this policy pursued by Sabry and other lawyers with the suspicion that it is one of the means of the system to take revenge on his opponents through lawsuits that the regime is not a direct party to. Opponents say that the request to close the agency’s headquarters in Cairo shows that the officer who filed the lawsuit was not personally affected by the agency’s report, but rather filed the lawsuit within the Egyptian regime’s policy of targeting the media. Opponents point out that the Egyptian regime wanted revenge on the Reuters news agency because it published a report talking about targeting the Egyptian media system, but the Egyptian regime, instead of denying that report, proved without intending to, all these accusations.

Over the past few years, the Egyptian regime has banned more than 500 websites, confiscated dozens of local newspapers, and its ambition has extended to muzzling the global media. The Egyptian regime has accused all media outlets that have criticised its policies of belonging to the Muslim Brotherhood and working in favour of an external agenda designed to discredit it.

The list of foreign media targeted by the Egyptian regime included the BBC, The Guardian, the Daily Mail, the Washington Post, the New York Times, Deutsche Welle, the Mirror, and dozens of other newspapers and Western websites. Observers say that the Egyptian regime pursues retaliatory policies towards the media that criticise any of its policies or its violations of human rights, and that there is no newspaper, channel or any opposition media broadcast from inside Egypt. The Egyptian opposition broadcasts a limited number of TV channels, all from outside Egypt.

The Egyptian regime has also restricted Egyptian activists on social media, and arrested politicians who have appeared on television programmes on some channels broadcast from abroad. Egyptian opponents accuse the Egyptian regime of trying to intimidate the media into silence.

Egypt protests expose the fragility of the economy