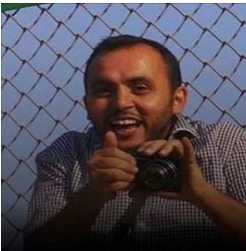 The Egyptian Public Prosecution decided to imprison 15-day journalist Moataz Wadnan Shams El-Din, pending investigations, accusing him in a new case, two days after his release in case 441 of 2018. In the new case, No. 1898 of 2020, the prosecution charged Moataz with charges of promoting the commission of terrorist acts, according to his lawyer Hala Douma. Last Thursday, the Public Prosecution Office decided to release Wadnan, and the journalist Moustafa Al-Aasar, and 8 others, by guaranteeing the place of residence in Case 441 of 2018.

The decision to release Moataz came after he was held in pre-trial detention for 27 months, in violation of the Egyptian law, because the maximum period of pre-trial detention is two years. Instead of releasing him, the Egyptian authorities have Re-detained him in a new case. Wadnan was arrested (for the first time) in February 2018, because of a press interview with Chancellor Hisham Genena, former head of the Central Auditing Organization, and a member of the campaign team for Sami Annan’s candidacy for the presidential elections. The arrest of Wadnan at that time was part of a fierce security attack that included a large number of journalists, in conjunction with the holding of the last presidential elections, and their inclusion in the case of case 441, which was known in the media as the “black hole”.

The prosecution charged Moataz with “joining a group that was established in contravention of the provisions of the law and the constitution,” and “spreading false news about the political and economic conditions in the country, with the intention of disturbing the public peace and inciting against the state.” However, the prosecution finally decided to release him, after he continued his imprisonment for an additional three months, exceeding the maximum period of pre-trial detention set by law for two years.

Instead of releasing him, the Egyptian authorities included him in case No. 1898 and remanded him in confinement again. Case papers No. 1898 say that its events began in late 2019, and its security investigations were prepared at the time that Moataz was held in solitary confinement in his prison, and that no one of his family or his lawyer met him.

Journalists described the case 1898 as a new “fabricated” case to target journalists and human rights activists. In this case, human rights activists were accused of receiving “external funding for the purpose of participating in a criminal agreement, gathering, and using special accounts on the International Information Network, with the aim of committing a crime punishable by law with the aim of disturbing public order.”

On his family’s last visit to him in prison, Wadnan asked the public opinion to talk about him and call for his release, fearing that he would be trapped in ‘revolving doors’ of prison and re-included in another case. ‘Revolving doors’ is a term used about detainees who were kept in detention of fabricated investigating cases, one after the other, tow years each.

The Egyptian authorities practiced “revolving doors” in two ways. The first is that the release order is carried out just on paper (not in practice), and The detainee remains in custody with the authorities, and the next day or several days later, he is presented to the prosecution with a new investigation, and practice of re-ordering the detention of detainees on blatantly fabricated charges, in a new case. The second is to implement the release of the detainee (in practice) after serving his sentence, and then arrest him in a new case. Lawyers say that the Egyptian authorities allowed the family of Moataz and Danan to visit him only four times in more than two years, in violation of the law that allows families to visit their families once a week.

Like Wadnan, the prosecution decided to release the director of the Egyptian Coordination for Human Rights, attorney Ezzat Ghoneim, pending case No. 441 of 2018, after spending more than two years in pre-trial detention, but his imprisonment continued with another case.

Ghoneim was included in case No. 1118 of 2019, in which he faces the same accusations as the first case, which is “joining a group founded in violation of the law” and “spreading false news.”