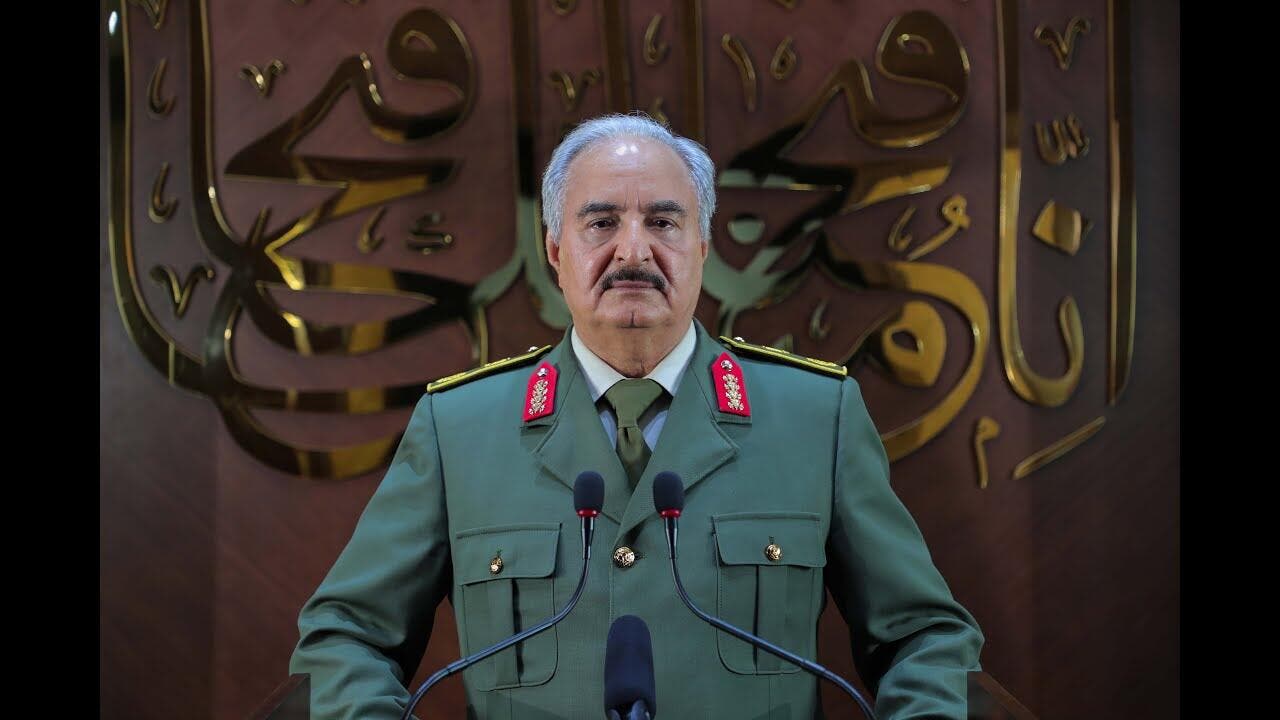 With the successive defeats and losses of the cities and bases of the Libyan west, General Khalifa Haftar is in a difficult situation that may accelerate efforts to replace and remove him by his international backers. Although Egypt, the Emirates, France, and Russia on the same side support the eastern Libya camp, against the internationally recognised Government of National Accord (GNA), each of them has different preferences over Haftar’s substitute.

The GNA refuses to sit at the negotiating table with Haftar because of his repeated violations of the ceasefire agreements, which puts more pressure on supporters of General Khalifa Haftar in the search for a substitute that may be acceptable in any possible political process. Cairo, Abu Dhabi, and Moscow are studying several substitutes for Haftar, especially after his forces disintegrated and tribes and the forces supporting him defected.

Egyptian sources say that General Abdel Fattah al-Sisi still prefers that Haftar’s replacement be another general, and that the Egyptian regime has begun an intensive search operation of the military men led by Haftar in the hope of finding a substitute. The most prominent names of the military personnel were the chief of staff of Haftar’s forces, Libyan National Army (LNA), Major General Abdel Razzaq al-Nadhouri.

Al-Nadhouri is considered close to the head of the parliament of eastern Libya, Aguila Saleh, but he does not have regional and international weight. Al-Nadhouri is second in command in the LNA, and he is the military ruler of the region from the city of Derna in eastern Libya to the town of Bin Jawad west of the Crescent Petroleum.

As the Supreme Commander of the LNA, Saleh plans to appoint al-Nadhouri as the successor to Haftar. Given that Major General al-Nadhouri is the governor of eastern Libya, he did not participate directly in the brutal military attack launched by Haftar against the Libyan capital, Tripoli.

The Egyptian regime views al-Nadhouri as a military general that could be promoted as a clean hand, whose hand was not contaminated with the blood of civilians in Haftar’s military operations, nor is he responsible for the successive defeats Haftar suffered. Al-Nadhouri is one of the founders of the Operation Dignity forces, which was launched in May 2014 to control the city of Benghazi (east), but he stayed in the east of Libya without participating in the fight in the west.

Egyptian intelligence sources revealed that among the military names discussed by al-Sisi is the former commander of the Chamber of Dignity Operations, Major General Abdel Salam al-Hassi, as a popular general from a big tribe in the east. The Egyptian regime also communicated with the assistant brigade of Haftar and one of his cousins, Awni al-Ferjani, considering that his relative relation to Haftar may satisfy Haftar. Among the names presented also in Cairo are the Chief of Staff of the Air Force Major General Saqr al-Jarushi, and also Major General Faraj Bughalia, who is a supporter of Muammar Gaddafi.

Egyptian sovereign and diplomatic circles are trying to promote another substitute, which is to form a new presidential council by the Libyan people under the supervision of the United Nations. The presidential council option is one of the items included in the Cairo Declaration initiative launched this month by Egyptian General Abdel Fattah al-Sisi, in the presence of Haftar and Saleh.

At the forefront of the potential Haftar substitutes is Aguila Saleh, the speaker of the Tobruk parliament (east of the country.) In recent weeks, Saleh’s shares, who visited Cairo twice in a short period, rose, and he was met by the Algerian President Abdelmadjid Tebboune and also phoned by Russian Foreign Minister Sergey Lavrov.

Saleh was elected a member of the House of Representatives in the 2014 elections, then its president, and sided with Haftar by appointing him as army chief, and also worked to block the Skhirat Agreement, on December 17, 2015. Saleh escalted the Libyan crisis by announcing the Tobruk House of Representatives’ support for the Haftar attack on Tripoli in April 2019.

In an attempt to remedy the situation after the defeat of Haftar’s LNA forces, Saleh called, with Egyptian support, for a ceasefire and the formation of a presidential council to govern the country. The road map included that each of the three provinces of Libya (Tripoli, Barqa, and Fezzan) separately take over the selection of those represented by the presidential council by consensus, or by secret selection method under the supervision of the United Nations.

Saleh suggested that the presidential council later nominate the prime minister and his deputies representing the three regions, to form a government, and to form a committee to develop and draft a constitution for the country, after which presidential and parliamentary elections will be organised. For years, the UAE has been working to prepare Aref al-Nayed, 57, a former Libyan ambassador to Abu Dhabi, as a substitute to Haftar, 76, and as a civilian face for military rule.

Al-Nayed has close relations with the adviser to the Crown Prince of Abu Dhabi, the dismissed leader of the Palestinian Fatah movement Muhammad Dahlan, who is on the red list of terrorists wanted by Turkey. The professor of philosophy, specialising in beliefs and the comparison of religions who presents himself as a Sufi figure, worked as Director General of Kalam Foundation for Research and Information, in the Emirate of Dubai in 2009, along with his membership in the Academic Advisory Committee at Tabah Foundation in the capital Abu Dhabi.

Al-Nayed resigned from his diplomatic position in 2016, and presented himself as a candidate in a Libyan presidential election (not completed) that had been scheduled for December 2018. Al-Nayed is one of the supporters of Haftar’s attack to control the capital, Tripoli, and he was calling for the formation of a national unity government to replace the GNA.

Abu Dhabi has worked to give al-Nayed the US administration’s approval, as it arranged for him to meet with officials from the US National Security Council during the year 2019, according to the American Defence One website. But al-Nayed, who is favoured by the UAE, does not seem to be the preferred choice for Cairo, which is still looking for a military leader, and not a diplomat or a politician.

Saif al-Islam, son of the late Libyan President Muammar Gaddafi, cannot be ignored, as one of the options available within Moscow’s arrangements for a future solution in Libya, although his shares remain limited on the Libyan street. Last March, discussions were held between Russian agents and Saif al-Islam, wanted by the International Criminal Court, for this purpose. Two Russian agents held three meetings with Gaddafi’s son, with the participation of a Russian election advisor, in the year 2019, according to Bloomberg.

Seif al-Islam has pledged to provide a list of military commanders who he trusts with his loyalty to Moscow, and documents related to his father providing financial support for election campaigns in Western countries as a pressure card to support his position. Gaddafi’s regime still enjoys the support and loyalty of some tribes, especially in the city of Sirte, the birthplace of Muammar Gaddafi.

But Qaddafi Jr. does not seem to be the preferred option of the UAE and the Gulf countries, which still remember the insults of Gaddafi (the father) in a number of Arab League meetings, and the Egyptian regime will not risk supporting Gaddafi (the son) which would anger his regional allies and financial supporters in the Gulf.