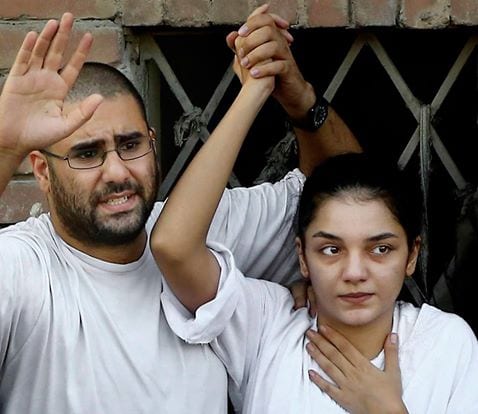 Activist Mona Seif, sister of the detained activist Alaa Abdelfattah, said that her sister Sanaa was kidnapped by a white van in front of the public prosecutor’s office as she was going to file a complaint against an attack carried out on her and members of her family yesterday in front of Tora Prison, by hired female thugs.

The political activist, Sanaa Seif, later appeared in the Supreme State Security Prosecution (SSSP) on Tuesday, where she was sentenced to 15 days imprisonment pending investigation, under claims that she aided “a terrorist group in achieving its goals by spreading false news and misusing social media.” Mona said that a police force was waiting for her sister, and she, her lawyer, and one of her friends were stopped at the door of the attorney general’s office and she was asked for her identity. After making sure that she was the one, they pushed her two companions away, took her in a van apparently belonging to the police whilst three private cars followed her (secret police).

Mona accused the public prosecutor of facilitating the security mission in arresting victims of violations in front of his office. “Where do we go and who protects us? How many of us do you want in prison?” Mona Seif asked in a post on her Facebook page. “Take the whole family, isolate us with Alaa in one cell, so that we and you can rest.”

The prominent writer Ahdaf Soueif, sister of professor Laila, posted on Facebook, “They concluded an investigation with Sanaa, and they did not allow her mother and sister to see her, and they moved her to an unknown location.” She confirmed that the prosecution’s decision was issued to imprison her for 15 days, and the police force claimed that they had arrested her from Al-Rehab City, while the lawyers accused that report of being forged and requested to review cameras in front of the public prosecutor’s office, to confirm that she was arrested there.

Sanaa went to the office on Tuesday morning to report the abuse, beating, and theft from her, her sister and mother, in front of Tora Prison, in addition to denying them contact with her brother Alaa. Sanaa, her sister Mona Seif, and her mother, Dr. Laila Soueif, were attacked by female thugs who were hired by the security services. Yesterday, Mona, the sister of the arrested activist Alaa Abdel Fattah, said in a live broadcast on her Facebook page from the door of Tora Prison, “They sent female thugs to us to beat us in front of the prison door, and the officers were watching.” She added that one of the police officers “asked the assailants to just move away a little from the security checkpoint location. They stole all our belongings, and fortunately for me, my phone was in the car.”

The Egyptian authorities claimed that Sanaa’s arrest was carried out in accordance with the orders of the public prosecution to arrest her. A statement issued by the SSSP said that an order was issued on June 11 to arrest the suspect, Sanaa Seif, for investigations after a report from the National Security Sector accused her of using a personal page on the Facebook to spread false news and rumours about the deteriorating health conditions in the country and the spread of coronavirus in Egyptian prisons. The SSSP also accused Sanaa of calling for protesting and gathering in front of the public prosecution headquarters and disrupting its work for the purpose of pitting public opinion against state institutions. The statement added that Sanaa is accused in a libel case for insulting a police officer through her Facebook page.

Human rights activists say that the arrest of “Sanaa was punishment for publishing pictures of her mother, Laila Soueif, sleeping on the floor in front of the prison to demand a letter from her son Alaa Abdelfattah.” Although Egyptian law does not prevent communication between the detained or imprisoned and their families, the Egyptian Interior Ministry refused to allow Alaa’s family to obtain a letter reassuring them of his health in light of the ban on visits during the outbreak of the coronavirus.

The photos of university professor Laila Soueif, 64, sleeping on the ground in front of the prison, caused a wave of anger on social media, which embarrassed the Egyptian regime. Instead of allowing Laila to exchange messages with her son, he punished her daughter for publishing those pictures by imprisoning her also and sent female thugs to beat them in front of the police officers.

Cairo is angry with Ismail Haniyeh after Iran visit