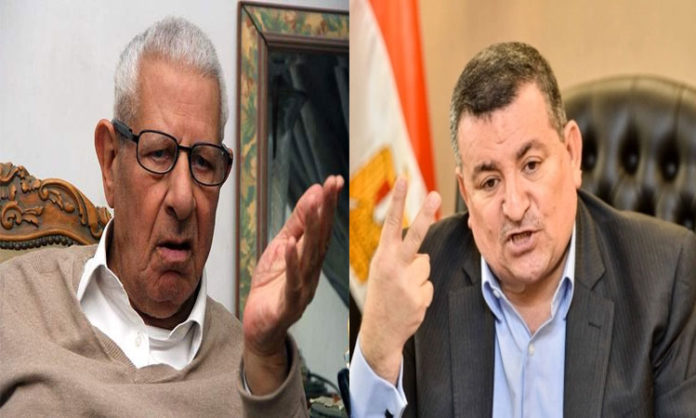 In December 2019, after five years of the Ministry of Information’s absence, President Abdel Fattah al-Sisi appointed Osama Heikal as the Minister of State for Information during the ministerial reshuffle of Moustafa Madbouly’s government. This decision came as a shock to one particular person who had served al-Sisi’s regime for a long time, helping to suppress freedom and destroy the journalistic profession just to retain his position, or to advance to an even more important one. After several battles, however, he finally lost the entire war, and his career came to an end. This man is Makram Mohamed Ahmed.

The al-Sisi regime has probably never cared much for any issue as much as information and press because of the importance of the media in creating or falsifying public awareness and their role in maintaining the regime’s stability, and out of fear of a repeat of what happened to Hosni Mubarak. Al-Sisi believes that the main reason behind the fall of Hosni Mubarak’s regime is the number of liberties allowed near the end of his rule, especially the freedom of media, in addition to the information and press’ central role in overthrowing and fuelling the opposition during the reigns of the Military Council and Mohamed Morsi.

A period of chaos had predominated the media during al-Sisi’s regime, and battles ensued among the three security services, the National Security Service, the Military Intelligence Service, and the General Intelligence Service to seize control and take over the file. During this period, Makram Mohamed Ahmed worked tirelessly to suppress media freedom, thus proving his loyalty to the regime in the hope that he would one day be in charge. Therefore, he was the fiercest attacker of the new minister, calling him mere hours after assuming his position, “a minister without a ministry, and a ministry without prerogatives.”

After the blow to the General Intelligence Service when word came out that al-Sisi’s son Mahmoud, who controlled the service, was removed, as well as the removal of the intelligence officer Ahmed Shaaban, the chief officer directly responsible for the media inside the service, confusion prevailed in the media. After the return to normalcy, and the service’s resolution of the dispute among the three security parties by taking over the media, it was decided that Makram Mohamed Ahmed would be laid off.

Some of the people inside the National Security Service tried to make use of this confusing situation by inciting Makram to criticise the way this issue was being managed. This became apparent during Makram’s interview with the closest media professional to the National Security Service, Ahmed Moussa, when he criticised the management of the media, said there was no freedom of opinion in Egypt, and that there was a lot of gagging and cover-ups and an attempt to transform the Egyptian media into a one-person media. He proceeded to surprise everyone by saying that one of his own articles was banned from publication.

After dozens of cease-and-desist orders, fines, and other services carried out by Makram for the regime, the last incidence between him and Osama Heikal was the final straw that prompted his removal, thus ending his journey in the regime’s service. The last of Makram’s series of deliberately disseminating the news of his disagreements with the Minister of Information close to the General and Military Intelligence Services was the memo he submitted to the prime minister about the dispute that turned into a hand-to-hand fight between the council’s employees and the ministry’s employees.

Makram said in his complaint that the Ministry of Information’s security manager together with the minister’s office manager and 18 of the ministry’s security personnel broke into the Supreme Council for Media Regulation’s building, took away the council’s documents, and changed the keys to the offices after a dispute broke out between the two institutions over transferring 61 of the council’s staff to the ministry, a decision that the minister refused. Makram thought that his complaint and incitement against Heikal would prompt an angry response from the regime in his favour, but he was sourly mistaken. Although the original intent of the regime was to end Makram’s career in a dignified way, this incident expedited his overthrow.

On June 24, al-Sisi issued a decree to restructure the Supreme Council for Media Regulation chaired by Karam Gabr, who is described as one of the obedient men of the General Intelligence Service, and who was selected over other people like Yasser Rizk because he never objected to any of the service’s directives, as well as his lack of personal insight for the file. The decree also dispensed of the services of Makram Mohamed Ahmed, aged 85, after several dishonouring incidents like his expulsion of the Syndicate of Journalists after the Revolution of January 25, 2011, when he was the head of the syndicate, and after his relentless war against the freedom of journalism to serve the oppressive regimes presided over by Hosni Mubarak, then Abdel Fattah al-Sisi.

Frequent exam leaks expose the failure of the government