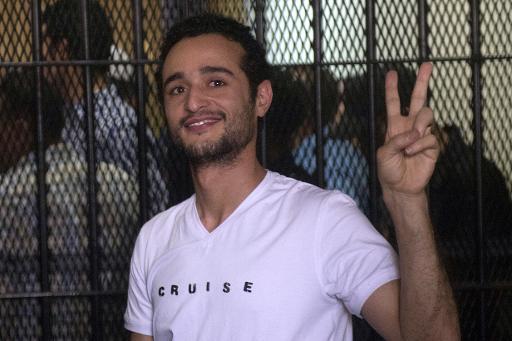 The Court of Cassation has upheld Ahmed Douma’s 15-year prison sentence and EGP 6 million fine ($374,284). With the court’s support for the judicial ruling and the rejection of the appeal submitted, the verdict is final and can no longer be appealed.

Ahmed Saad Douma was born in 1985 in the centre of Abu el-Matamir, Beheira Governorate (north of Cairo). He is a journalist, political activist, and former spokesperson for the Revolution Youth Coalition, one of the movements that emerged after the January 25 2011 revolution.

The 11th Department of Terrorism at the Criminal Court in south Cairo, held in the Police Trustees Institute in Tora, headed by Counsellor Mohamed Sherine Fahmy, ruled on January 9, to punish Douma with a 15-year prison sentence and compel him to pay EGP 6 million in damages. The case went through a number of stages, starting in February 2015 when the Cairo Criminal Court sentenced him to life imprisonment in absentia along with 229 others on the same case, obliging them to pay EGP 17 million ($1.1 million) for damages to public facilities, and punishing 39 minors with 10 years’ imprisonment. In October 2017, the Court of Cassation ruled that the appeal submitted by Douma was accepted and he would be retried before the 11th Chamber of the Cairo Criminal Court.

The events of the case date back to December 2011, when there were clashes between the security forces and sit-in protesters at the Council of Ministers in central Cairo against the appointment of Kamal al-Ganzuri as Prime Minister at the time. The protesters considered that al-Ganzuri was affiliated with the regime of former President Hosni Mubarak, who was toppled by a popular revolution on January 25 of the same year. Because of that case, Douma was arrested in December 2013, on charges including “gathering, assaulting the police and army, and assaulting government buildings,” charges that the political activist denies. On February 4, 2014, the Giza Criminal Court (west of Cairo) sentenced Douma to life.

Today, the Court of Cassation rejected the defendant’s second and final appeal against the Cairo criminal ruling and now only the president of the country has the right to commute, cancel, or pardon him, according to Egyptian law.

Opponents accuse the Egyptian regime of taking revenge on all young people and symbols of the January 25 2011 revolution, by throwing them into prison for various reasons. Although Douma was an opponent to the rule of the Muslim Brotherhood, the Egyptian regime see him as one of the youths who actively participated in the January 25 demonstrations that toppled former President Mohamed Hosni Mubarak.

Besides Douma, dozens of Egyptian activists remain in the regime’s prisons, and they were all opposed to the rule of the Muslim Brotherhood, whose tens of thousands of members have been arrested by the Egyptian regime. Among the most prominent of these are Alaa Abdelfattah, Esraa Abdel Fattah, Muhammad al-Qassas, Shadi al-Ghazali Harb, Haitham Muhammadin, and many others.

All of them were arrested and added to various cases on various charges, and some of them spent long years in prison without any judicial conviction. Along with Islamists and members of the Muslim Brotherhood, the Egyptian regime has expanded the detention of liberal and left-wing youths opposed to its policies, especially prominent activists who participated in the January 25 2011 revolution.

Obtaining security permission: Euthanasia of the press in Egypt

Why did the regime put Shady in prison to die?

The decline in external demand for Egypt’s labour raises fears