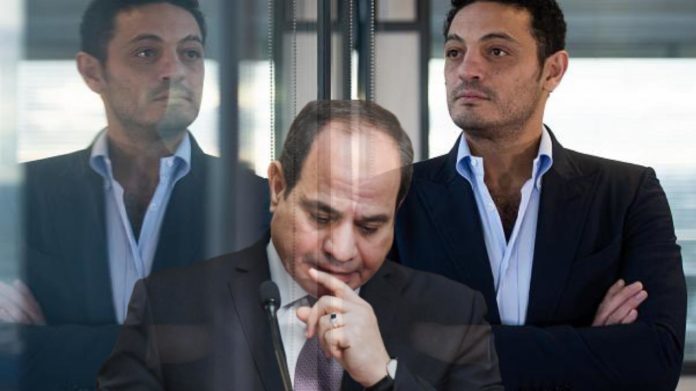 Egyptian businessman and dissident Mohamed Ali faces the prospect of deportation to Egypt after a request made by the Egyptian authorities to a Spanish court, as he resides in Spain, to extradite him for trial on charges related to tax evasion and money laundering. Mohamed Ali is the most famous dissident in Egypt, after video clips broadcast by him on the internet inspired rare protests in Egypt last September, and he appeared as a populist rebel for months. General Abdel Fattah al-Sisi was forced to publicly return from a trip abroad to answer Ali’s accusations.

Despite the decline in the spotlight on Ali, the Egyptian regime is still seeking Ali and targeting him, as al-Sisi pushes to silence critics abroad. Ali, whose online videos ignited a flurry of rare anti-government protests last year, is struggling against extradition from Spain, as the Egyptian regime escalates its campaigns to silence its most vocal critics.

The construction magnate (Ali) was brought before a Spanish judge in a preliminary video hearing on July 9, where the court granted him 45 days to present his case and the reasons why he should not be deported to Egypt, according to the New York Times. Ali rejected the charges against him, and considered it a convincing attempt to punish him for his anti-regime activities.

Although Mohamed Ali was not a well-known opposition figure, and he had extensive relations within the Egyptian regime, he suddenly jumped to being the most famous Egyptian opponent through the videos he broadcast from Spain exposing corruption.

Ali exposed corruption incidents involving Egyptian President Abdel Fattah al-Sisi and a number of army leaders, and he called on the Egyptian people more than once to break out in mass demonstrations in Egypt’s streets to bring down the regime. Ali’s videos were broadcast from Spain’s northeastern region of Catalonia, where he has been living in self-imposed exile since 2018. Ali’s videos started as complaints of being cheated, but turned into one of the most known scandals about the Egyptian regime’s corruption after he spoke about corruption in al-Sisi’s circle and family. The Egyptian actor called for a wave of street protests in Cairo and several other cities.

The Egyptian regime faced, for the first time after years of quiet, several thousand young protesters, and clashed with them after they chanted slogans in an unusual scene of defiance against “al-Sisi’s oppressive rule.” The authorities clamped down hard on the wave of protests sparked by Ali’s videos, arresting over 3,000 people according to Human Rights Organisations.

Ali also wanted to unify parties and groups opposed to al-Sisi, including the Muslim Brotherhood, the largest opposition group in Egypt. But the rebel star has largely receded into the background, and he has expressed frustration that the protest movement ultimately failed to shake al-Sisi’s power. An Egyptian court sentenced Mr. Ali in absentia to five years imprisonment on tax evasion charges in February and ordered him to pay about $250,000 in taxes.

Egypt is calling on Spain to send Mr. Ali back to Egypt to stand trial on charges of money laundering and tax evasion, and repeated many previous accusations, saying that he struck property deals dating to 2006, “without declaring part of his sales.” But the opponent businessman denies the charges, saying that he left Egypt two years ago from Cairo Airport and no one stopped him. If he had committed fraud, why did they let him leave the country? Egypt and Spain do not have an extradition treaty, so the request must be decided by a judge. Ali says that he hopes that Spain’s courts would also side with him against the regime because Spain is “a fair country that fights for human rights.”

Observers see the extradition request as the latest effort by Egypt to use legal tools and other means to silence the regime’s critics who live away from the reach of his powerful security services.

The Egyptian regime has expanded its policy of chasing opponents who live abroad. Egyptian prosecutors have made numerous extradition requests to countries in Europe and Asia to bring back dissidents since 2013. That policy targeted at first leaders of the Muslim Brotherhood especially but it was expanded to include all opponents.

Almost all of the extradition requests made by the Egyptian regime have failed but some dissidents were extradited from KSA, UAE, and Kuwait. Also, some opponents have been held in prison or had their assets frozen for months in countries like Albania, Ukraine, and India.

How did Egypt look on the eve of Friday of anger?