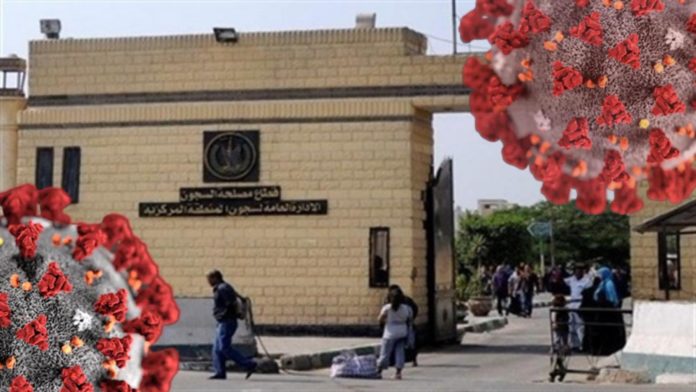 A message leaked from Egyptian prisons reveals an outbreak of coronavirus among political detainees, in the light of the deterioration of healthcare and the overcrowded cells. These messages expose the prison’s lack of the most basic necessities of life, and confirm that the various departments ignore the prisoners’ calls to speed up their treatment or release them. These messages say that prison inmates live in dirty, overcrowded cells and some do not have access to water directly, adequate ventilation, or adequate health care, all of which are conducive to the rapid transmission of infection.

Symptoms of the virus are present, the infection is spreading, and in the end, prisoners die. This is what Human Rights Watch revealed in a report this week when it documented at least 14 deaths from coronavirus in 10 detention centres in Egypt, until July 15. “Even though scores of prisoners and detainees, at a minimum, have shown mild to severe COVID-19 symptoms, prisons had insufficient medical care and virtually no access to testing for the virus or symptom screening,” says the report.

The Committee for Justice, a Geneva-based human rights organisation, said that the number of detainees, and those suspected of being infected with the coronavirus, had reached approximately 225 cases. Among the 193 detainees infected and suspected of being infected, the Ministry of Interior conducted PCR tests according to the protocol of the Egyptian Ministry of Health for only 29 detainees, while it conducted blood tests for 33 others, according to the organisation.

The organisation documented the testimony of a family member of one of the prisoners, confirming that prison departments prevent the delivery of medicine to detainees. It also quoted him as saying that this prisoner had told him that in all the prison cells he was held in there were prisoners with symptoms, but the PCR laboratory examination was not available. In the face of this, human rights organisations have expanded their campaigns to demand the release of prisoners and detainees in Egypt, under the slogan “There is an epidemic… Release the detainees.”

These campaigns demand Egypt do what the other countries Iran, Germany, and Canada have done and release tens of thousands of detainees in fear of the spread of coronavirus inside its prisons. The former presidential candidate Hamdeen Sabahi, and leftist and Islamist political currents, participated in this campaign, stressing that there is no longer any rationale for continuing to imprison anyone amid the pandemic. Journalist Ikram Youssef, the mother of detained political activist Ziyad al-Alimi, said: “Coronavirus will not differentiate between an officer and a prisoner … Egypt’s interest is more important than lust for revenge against the revolutionaries,” referring to the January 2011 revolution.

The number of prisons in Egypt is 68, of which 26 were established after the arrival of the Egyptian General Abdel Fattah al-Sisi to power. A few days ago, human rights activists and Egyptian regional and international civil society organisations addressed a call to the International Committee of the Red Cross and the World Health Organisation, in order to push them to exchange official correspondence with the Egyptian government, in order to develop preventive frameworks for detainees and prisoners against the spread of coronavirus.

Human rights organisations also launched a petition to request the Egyptian authorities to release political detainees in addition to the elderly and those suffering from chronic diseases. These claims come amid increasing concerns for the families of prisoners, in light of the authorities’ decision to suspend visits to all prisons, claiming that “the health of inmates, prisoners and their families” is taken care of by this decision.

“Instead of providing adequate medical care and health measures to prevent the outbreak of the coronavirus, the Egyptian government is trying to obscure a serious health crisis in prisons,” says Joe Stork, deputy director of the Middle East and North Africa division at Human Rights Watch. “The prisoners, their families, and the Egyptian people deserve to know the health risks they face and what the government is doing to deal with these risks,” Stork said. He added: “It is necessary for Egypt to tackle the spread of the virus by accelerating the release of prisoners.”

Amnesty International had previously called at the end of last April on the Egyptian authorities to reduce the number of prisoners, (by releasing some of them) especially children, and activists, and also called for the protection of the most vulnerable prisoners, amid increasing fears of an outbreak of coronavirus in the overcrowded Egyptian prisons.

The number of prisoners and detainees in Egypt ranges between 110,000 to 140,000 prisoners and detainees, among whom at least 26,000 are on remand on pending cases. No judicial rulings have been issued against them, according to media reports. Overcrowding in prisons ranges between 160 per cent in prisons and 300 per cent in police detention centres, according to an official report issued in 2016 by the National Council for Human Rights.

In Egypt the judiciary is not concerned with justice