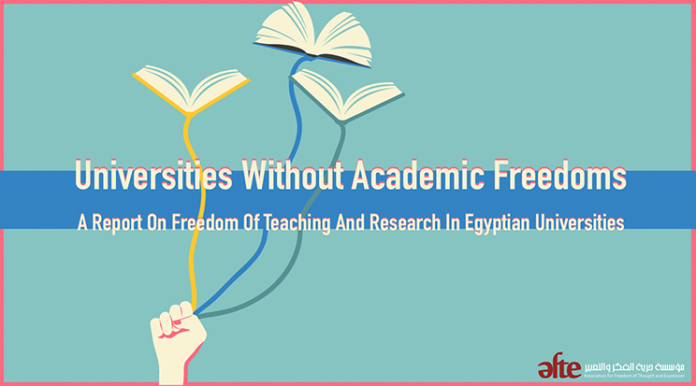 Association for Freedom of Thought and Experssion has documented several violations against academics and researchers in Egyptian universities.

The association published on Sunday a report entitled “Universities without Freedom”, which reported on scientific theses being scrapped, graduation certificates given for political reasons, and the interference of university departments and the Ministry of Education in the freedom of research and teaching.

The report covered the period between 2013 and 2019, when master and doctoral theses were cancelled and suspended for political reasons, and the discussion committees were referred to investigation. The report said: “What has happened in Egypt for years highlights how the Egyptian authorities have used methods of threatening and intimidating members of the teaching staff and researchers at the Egyptian universities.” The report added: “University professors practice a kind of self-censorship over the choice of questions that they deal with in lectures or even topics on which graduate students work specifically, due to the increasing restrictions they are exposed to.”

Association for Freedom of Thought and Experssion called on the Egyptian authorities to immediately stop all interventions and directives of scientific research and studies.” The organisation stressed the need to give researchers, professors, and graduate students “the absolute freedom to choose their research topics without political, moral or religious restrictions,” and to stop referring professors to investigation.

Association for Freedom of Thought and Experssion is an “independent legal institution” that was established in 2006 and takes the Egyptian constitution, and international treaties, as a reference.