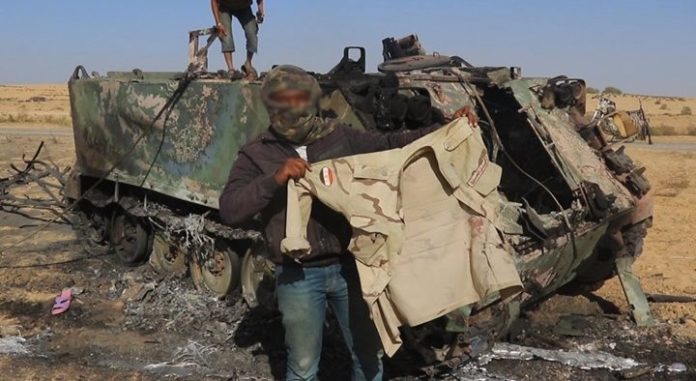 Seven years of continuous attacks and strikes targeting the Egyptian army and police camps and checkpoints in North Sinai, which Sinai Wilayet (the local branch of ISIS) claim responsibility for, have made it seem like an endless war. Targeting one of the checkpoints or camps in the different regions of North Sinai (Al-Arish – Bir al-Abd – Sheikh Zuweid – Rafah) has become a frequent news story, always with various numbers of dead officers or soldiers.

After each attack, the military spokesman of the Egyptian Armed Forces appears, announcing that the attack on one of the checkpoints had been foiled and that a number of armed men and so-called takfiri were killed, and that there were losses among the army. Continuous attacks are pushing analysts to search for its causes and the authorities’ inability to repel or end them throughout these years, in light of the scarcity of information about this region that has become a battleground as the army prohibits any journalists, newspapers, TV channels, and news sites to transmit any news about the operations and strikes that take place except what is officially issued by the military spokesman.

The latest terrorist operations in Sinai, which occurred in the city of Bir al-Abd on Tuesday, killed at least 10 soldiers, according to what Egyptian military medical sources told newspapers (outside Egypt). While the Egyptian army announced the death of only two soldiers, and the injury of others, adding that “18 takfiri elements were killed during the forces’ foiling of the attack”, after which tribal sources in Sinai stated that the Sinai Province organisation executed an army officer after he was kidnapped from a checkpoint at the city of Bir al-Abed.

Bir al-Abd’s attack and the rise in the number of operations targeting checkpoints of more than 100 operations raises questions from specialists and followers about the failure of a strategy for Sinai, especially in light of more than one attack on a single security checkpoint in the same area. The most prominent and well-known of these strikes is the large-scale attack by the Sinai Province organisation, in July 2017, by 150 armed men and 12 weapons-armed cruise vehicles, on the Al-Perth checkpoint, the headquarters of the Battalion 103 thunderbolt.

Twenty-six members of the armed forces were killed in that battle, including Colonel Ahmed al-Mansi, the battalion commander. The attack continued for hours before the expected support arrived.

Although the army launched various military operations under various names such as “the right of the martyr” and “the comprehensive operation”, the bloodshed did not stop and the war against terrorism has not yet ended. Although al-Sisi launched the Comprehensive Operation Sinai 2018, three years ago, using what he called “brute force against extremists,” armed attacks continue to escalate, and according to official data from the armed forces, the death toll due to the attacks on the checkpoints and camps in North Sinai exceeded 150 dead and hundreds of wounded members of the army and police, since the attack on the Reisah checkpoint in October 10, 2013, until the attack on the Heroes 14 checkpoint on June 5, 2019.

It can be said that the bet on brute force and the security solution has clearly failed miserably, especially in light of the assassinations and targeting of many brigade commanders of army officers. Al-Arish Airport was targeted in 2017 and a military helicopter hit with a Cornet-guided missile, during the secret visit of the former Minister of Defence and the Commander-in-Chief of the Armed Forces, Lieutenant-General Sidqi Sobhi, accompanied by the former Minister of the Interior, Major General Majdi Abdel Ghaffar.

The failure of the security solution and the inability of military operations to resolve the situation or stop the bloodshed comes in light of the imposition of the state of emergency and a curfew in North Sinai for several years, which has affected the lives of citizens in Sinai, who suffer from lack of food in addition to the interruption of electricity, water and communication networks. The deterioration of living services, in addition to the displacement of the people of Rafah from their homes, the demolition of their homes, and the demolition of their lands planted by the army has created an incubator of terrorism, according to experts, who demand that the security strategy in Sinai be changed because it has not made any progress.

The problem is that the Egyptian regime refuses to adopt integrated solutions to eliminate armed groups and terrorism in the Sinai. Rather, the regime has arrested researchers and activists who spoke about human rights violations in Sinai or even published information that the military spokesman did not mention in its statements.

In May 2018, the military court sentenced Ismail Iskandarani to 10 years in prison for his criticism of what is happening in the Sinai Peninsula. While the Egyptian regime says it is fighting terrorism, human rights activists say that the way the Egyptian army behaves in Sinai is at least in part responsible for creating an incubator for terrorism.