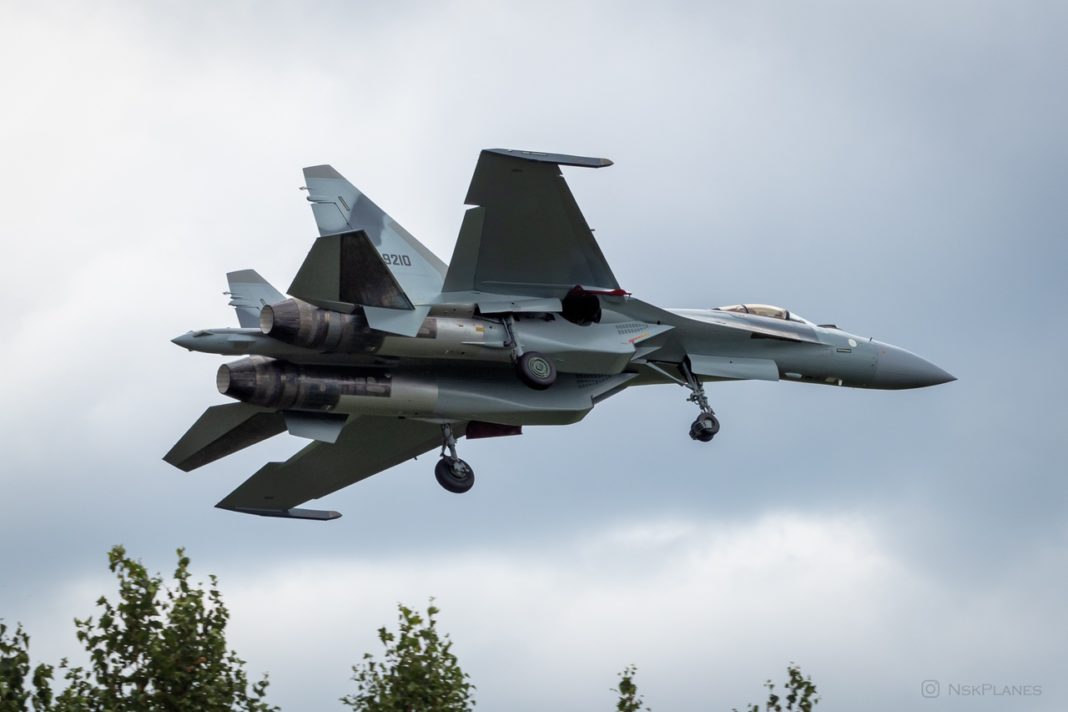 This week, many websites specialised in military affairs published photos that they said were the first published pictures of the Russian Sukhoi Su-35 (Su-35) aircraft coming out carrying the Egyptian Air Force’s camouflage colours, similar to those of the Russian Mig-29 owned by Cairo. America had threatened to impose sanctions on Egypt if this deal was sealed. So, would Cairo close the deal invoking America’s wrath? And does the Libyan issue have anything to do with this deal?

Over the past few days, War Zone, Military Watch Magazine, and Global Defence Corp websites specialised in military affairs published photos of the first five Russian Sukhoi Su-35 aircraft while performing test flights over Komsomolsk-on-Amur city in the Russian southeast. These crafts carried the Egyptian Air Force’s camouflage colours like the rest of the Russian jets possessed by Egypt and were numbered 9210, 9211, 9212, 9213, and 9214.

In May, the Russian News Agency (TASS) said that the Sukhoi factories have already started the production of the first patch of the latest generation aircraft for Egypt according to the contract signed in 2018. The agency did not specify the date of their delivery exactly stating that the dates are subject to change because of the coronavirus pandemic. The number of jets expected to be delivered to Egypt ranged between 24 and 30 aircraft under a $2 billion contract. Egypt is considered the second client in the world to purchase this model after the Chinese army, which already received its 24-aircraft-deal at the end of 2018.

Last November, the American Secretaries of Defence and State sent a letter to the Egyptian Minister of Defence, Colonel General Mohamed Zaki, warning him that Egypt might be subjected to American sanctions according to the CAATSA law because of the Russian Su-35 aircraft’s deal. The letter came after Zaki received his Russian counterpart, Sergey Shoygu, who came to participate in the sixth meeting of the Russian-Egyptian joint committee on military-technical cooperation.

Before this letter, at the same time as Egyptian President Abdel Fattah al-Sisi’s visit to Washington in April 2019, the American Secretary of State, Mike Pompeo, threatened Egypt with sanctions if it purchased the Russian fighter jets. This threat came during Pompeo’s statement before the Senate Appropriations Subcommittee on Foreign Operations regarding the fiscal year 2020 budget. He said then, “We’ve made clear that if those systems were to be purchased, the CAATSA statute would require sanctions on the regime.” He added, “We’ve received assurances from them that they understand that, and I’m very hopeful that they will decide to not move forward with that acquisition.”

Although the Egyptian government did not respond to these threats, the answer came from Yahya Kadwani, the member of Egypt’s Defence and National Security Committee of the Egyptian parliament, as he said that the pressures applied by Washington violate the diplomatic standards, and is considered an unacceptable interference in Egypt’s internal affairs.”

Libya on the line

The latest news about Egypt’s near acquisition of the first batch of the deal coincides with the escalating events in Libya and Moscow’s role in them. The Russian military had supported Khalifa Haftar’s forces during his military risk they took to storm the capital, Tripoli, which is the headquarters of the Government of National Accord (GNA). After that, Russia withdrew its forces of mercenaries affiliated to the Wagner police department which affected Haftar’s forces severely and forced them to retreat to the borders of Sirte, while the GNA forces advanced supported by Turkish military equipment.

With the GNA forces getting closer to Sirte, the Egyptian President, Abdel Fattah al-Sisi, declared the Sirte-Jufra line a red line for the GNA, and he threatened Egyptian military intervention should the GNA cross that line. That was followed by the approval of the Egyptian parliament to send Egyptian forces to fight in Libya, which hinted that a direct military conflict between Cairo and Ankara is approaching. Between the strong part that Russia plays in Libya by providing military support to Haftar and its strong relationship with Turkey, the Su-35 deal might have come to gain Moscow’s affection and prompt it to take a more serious action to stop the GNA forces’ advancement.

Several analysts indicated that Egypt’s insistence on possessing Su-35 fighter jets is because of the US’ position against the sale of its F-35 aircraft. Cairo has been trying to purchase them since 2008 after Washington sold a number of these advanced and multi-task aircraft to Israel. Cairo attempted this purchase repeatedly. The last of these attempts was in 2018 when the US President, Donald Trump, promised his Egyptian counterpart to honour this request. However, this promise was not fulfilled because the Pentagon forbade selling this model to all the Middle East countries except for Israel, which prompted Egypt to arm itself with the Russian Su-35 fighter jets. Washington imposed sanctions on Beijing because of its acquisition of 10 Su-35 aircraft along with a number of the Russian air defence systems S-400. Among these sanctions were prohibiting the issuance of American export visas to the Training and Supply section of the Chinese Army, forbidding any banking transactions with the American financial sector, freezing all its properties subject to American jurisdiction, and preventing the department’s head from entering the USA as well as freezing his accounts and properties in the USA. The American administration’s spokesperson stated that these sanctions and others might be imposed on other countries to prevent money flow to the Russian government and that the American administration warned other countries against purchasing the Sukhoi product