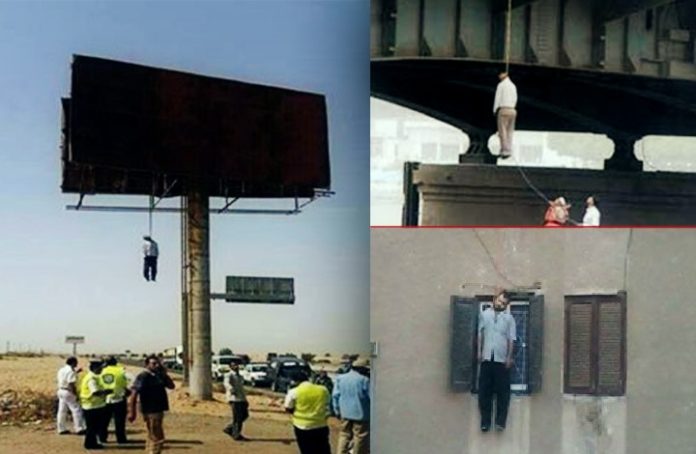 “A society that cannot find subsistence, and its members were unable to carry out the tasks entrusted to them, so they agreed to kill themselves.” Thus, “Taha Abu Hussein,” the Egyptian mental health professor, spoke about the increase in suicides in Egypt. Suicide has become regular daily news in Egypt, in recent months, amid a state of indifference, according to observers, in the official and media handling of the crisis.

There is no official statistic of the number of suicides in Egypt, but a report by the Arab Foundation for Civil Society Support, Human Rights (Egyptian Civil Society Organization) monitored 203 suicides and 12 suicide attempts, during the period from January to June 2020. In the past few months, Egyptian media have reported increased incidents of suicide, especially among young people, most of which appeared to be due to difficult economic conditions. These cases are not the result of an emergency situation during the past months, but rather a continuation of an increasing rate of suicides in Egypt.

In 2009, 5,000 of them actually managed to end their lives with suicide, which warned of the danger that “suicide in Egypt is a dangerous phenomenon that is escalating day by day.” In a report by the World Health Organization, 2018, Egypt topped the list of Arab countries that record the highest rates of suicide incidents per 100,000 people, specifically for those under 40 years of age, where Egypt witnesses 3 thousand suicide attempts annually (8 daily suicide cases). According to the report, for every case of suicide, a number of other cases that attempt suicide but failed, indicating that suicide is the second most important cause of death for girls between the ages of 15 to 29 years.

The Center for “Egyptians for Economic and Social Studies” (non-governmental) revealed in a report that Egypt witnessed 4 thousand suicides due to the economic situation, from March 2016 to June 2017. Official authorities in Egypt are very conservative in publishing such data for various reasons, one of which may be that not to frighten the society, as well as preventing the export of a negative image of the conditions of society abroad. According to observers, the actual numbers of suicide attempts are inaccurate, given that the family and the relatives of suicides or suicide attempters refuse to announce this, and therefore most cases are not documented.

But the Ministry of Health prepared a study last year, based on a sample of high school students, estimated at 106,638 students, and said that 21.7% of students are considering suicide. “Society does not recognize the psychological pain resulting from economic and social problems, and unfortunately it is neglected until it increases, and the person turns to suicide,” thus Karim Darwish, an expert of psychiatry in Egypt, summarizes the situation of suicide.

Sociologist Mohamed Fathy agrees with him when he says that “many of those who decide to commit suicide are victims of the difficult social conditions and stresses of life they cannot tolerate.” Perhaps the most famous case of suicide in Egypt this year, a patient with the “Coronavirus” did not find the costs of treatment, so he proceeded to hang himself. Egyptian specialists and politicians refer to the psychological crises experienced by suicides, including poverty, unemployment, high cost of living, lack of workplaces, and a decline in the standard of life, as well as marital problems.

Opinions differ on the reasons for the increase in suicide, it is difficult for many non-specialized citizens to separate these horrific incidents from the repercussions of the psychological and family pressures that they see around them all the time due to the crazy rise in prices. Despite the high rise in prices, income rates have not improved, especially since this difficult living leaves its repercussions on many aspects of life, which directly or indirectly affect citizens, whose psychological and mental capacities vary to absorb and deal with these difficult problems.

Specialists and psychological experts are calling for a measure of the quality of life, the extent of people’s happiness and their sense of safety in their lives, their education, and housing, to find out the causes of the phenomenon and confront it. Psychiatrist Ahmed Fahmy calls for focusing family and friends to notice the early signs of those who attempt suicide, most of which are conversations about the feasibility of life, and sometimes it is a direct statement of the desire to commit suicide. He adds in his interview with Egypt Watch that “it is not permissible to deal underestimating with these conversations, but rather we must reassure those who think about suicide, inform us of our sense of his problem, and try to persuade him to resort to specialized psychological assistance.” Fahmy warned from recent religious fatwas, which said that “Suicide is a reprehensible and great crime of major sins, and its perpetrator is sinful and sinful, but not a disbeliever or out of religion, and therefore his fate is not the hell, immortal in it.” Fahmy pointed out that these fatwas are an invitation for those who wish to commit suicide to go on their attempts, “as long as God forgives and mercy will include them.”

In the same vein, the writer Jamal Nafi mocked him in his article in the newspaper Al-Ahram (governmental), entitled “Halal suicide”, in which he reviewed the verses and hadiths that prohibit killing oneself or harming the body. He asked, “Doesn’t the owner of this fatwa think that he makes it easy to get rid of life for everyone who has a problem or lost his hope in life?”