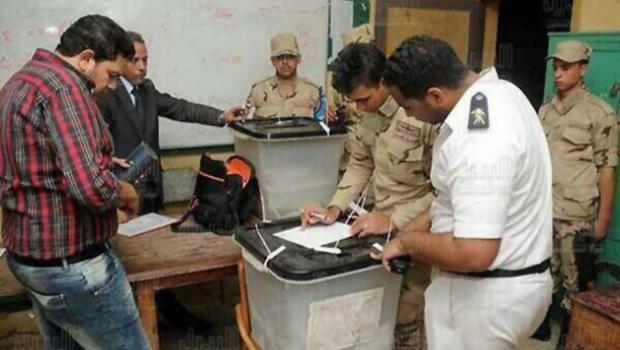 On Sunday, the National Elections Authority announced the final list of candidates for the second chamber of the Egyptian House of Representative’s elections. The elections returned once again this year after they were canceled after the 25 January 2011 revolution and after the Council’s name was changed from the Shura Council to the Senate Council. The administrative courts finished their work on all the election petitions presented by the candidates eliminated from the preliminary lists, as well as the appeals against the approved candidates. The security services intend to dominate these elections via their electoral list “For Egypt”, which witnessed a competition between the National Security Service and the General Intelligence Service.

Resources close to the list formation backstage told “Egypt Watch” that a dispute broke out between two of the security services. On the one hand, the National Security Service believes that it is more knowledgeable of the administration of the inner and political affairs because of its experience in and control over this file for decades. On the other hand was the General Intelligence Service which interfered significantly in this file’s administration since 2015. The dispute over the list was an extension of the disagreements that arose between the two services inside the House of Representatives. The National Security Service, however, finally won and will dominate most of the consolidated list’s seats. The sources explained that the National Security Service leaked a fake list of the percentage of the parties on the “For Egypt’s” list just to buy some time. This decoy list was announced on many websites and gave the Nation’s Future Party 40 out of 100 seats, the Republican People Party 20 seats, whereas the Homeland Defenders Party’s share was only 6 seats.

However, the final list submitted to the Supreme Elections Authority was a completely different one. It consisted of 11 parties and the Nation’s Future Party had the absolute majority with a percentage of 59% of the list. Meanwhile, the Republican People Party took 10 seats, and, similarly, the Homeland Defenders Party took another 10 seats. Six seats were given to the Wafd Party, three seats each for the Egyptian Social Democratic Party and the Reform and Development Party, two seats for the Patriotic Movement Party, and one seat each for the Conference Party, the Egyptian Freedom Party, and the Modern Egypt Party.

The Nation’s Future Party was founded by the Military Intelligence Service after Abdel Fattah al-Sisi took over the government in 2014. After some time, however, the Service decided to withdraw itself from direct interference in the political life. Hence, the Party’s affiliation was transferred to the State Security Service, which later became known as the National Security Service of the Interior Ministry. The Service came back to take over control of the political life once more after the major interference of the General Intelligence Service in 2015 and the current House of Representative’s formation. Nonetheless, the National Security rapidly recovered its political power and influence, especially after the President’s son’s, Mahmoud al-Sisi, influence weakened due to the burning of his name by the media and his repeated disagreements inside the Service and with the other services. In addition to 59 seats in the consolidated list, the “For Egypt” list, the Party competes for the single-member seats with 93 candidates.

As for the Homeland Defenders Party, it is led by commandos Major General Galal Haridy, aged 91 years old, and his vice-chairman General Fouad Arafa, the former director of the Military Intelligence Service and who is considered the General Intelligence’s man. This Party was founded in July 2013, days before the Armed Forces removed the late President Mohamed Morsi, and it included a number of retired officers.

The sources revealed that sums ranging from EGP 10 million to EGP 25 million were paid by the candidates of the “For Egypt” list. Paying these sums was the first and foremost prerequisite set by the services to run in the elections as a part of the list for the Nation’s Future and the Republic People Parties, which are controlled by the National Security. Then comes the security clearance (the extent of the Service’s satisfaction with the candidate), and to a lesser extent the tribal relations in Upper Egypt and border governorates and the candidate’s popularity in his circle. The list contained a number of well-known names like Ahmed Abu Hashima, the famous businessman and the main financier of the Republic People Party, and Mahmoud Bakry, brother of the media professional and the current member of the parliament close to the security services Mustafa Bakry, among other names well-known for their loyalty to the security services.