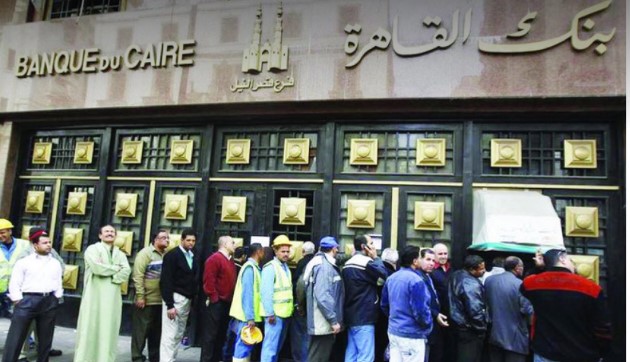 Long queues extending in the streets, heavy crowds, and lack of commitment to any precautionary measures or social distancing in light of the spread of the coronavirus – this was the case for people trying to get to cash points to retrieve their salaries and pensions in Egypt throughout Eid al-Adha. The crisis is repeated every holiday, without solutions. Citizens expressed their dissatisfaction with ATM machines breaking down, the fact that there are not enough of them and that there is not enough money inside them so the employee or the pensioner cannot withdraw his salary.

Pensioners in Egypt stand in line and crowd into the extreme heat, despite their old age and poor health, to spend their monthly pension, only to see that “the ATM is down or empty of money”. If the pensioners go to the post office, the suffering is more severe with the heavier crowds and staff who are not polite to them.

The beginning of Eid al-Adha coincided with the end of the Gregorian month, which is the date for the payment of salaries to state employees and pensions for the elderly, which made the queues in front of ATM machines even longer, that then resulted in clashes between citizens. And with the limited number of ATM machines available in each city, the employee transposes on one machine after another in the hope of withdrawing his monthly salary to buy the holiday requirements for his family. Regularly, only one ATM machine has funds.

This coincided with the banks closing their doors during the Eid period and for a period of five days, which is the period of official leave, while officials confirm the exacerbation of the crisis that the banks are keen to fill the machines continuously to meet customer requests. As for the citizens, they demanded quickly the provision of funds and the filling of machines so that they could pay salaries and pensions in a timely manner. There are around 13,500 ATM machines spread throughout the Republic, according to the latest report issued by the Central Bank.

If the employee or pensioner chose to leave the ATM and go to a post office to spend his money, the suffering would be more severe, amid clashes and quarrels in order to reach the window. In recent months, several elderly people died while they were queuing at the post offices due to the extreme heat and overcrowding. Those who go to post offices to receive pensions are also accustomed, after a long wait, to return to their homes without getting what they wanted. The phrase used by the postal employee to destroy the remaining hopes is “the operating system is down.”

A report issued by the Ministry of Communications and Information Technology revealed that the total number of pensions disbursed from post offices decreased by 11.36 per cent, as well as the number of cash withdrawals, due to the slow, outdated system. The report pointed out that the number of disbursed pensions decreased to 5.46 million in June 2019, compared to 6.16 million in the same period of 2018, with a loss of 700,000 pensions, as well as the number of immediate internal postal transfers, by 0.47 per cent. A source in postal areas affairs justified this retreat by saying: “The system of pension is slow and did not happen for many years, causing millions of people to queue for hours.”

The National Postal Authority, in response to requests for a briefing by parliamentarians, regarding the suffering of citizens and the elderly due to the delay in steps to develop post offices, had also revealed that 60 per cent of post offices have suffered losses.