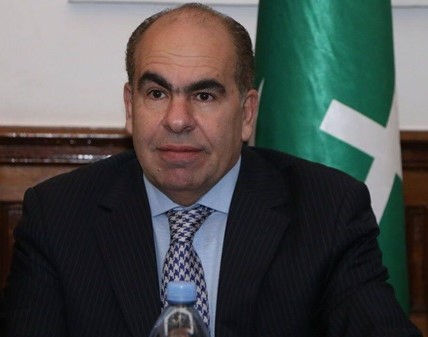 On Sunday, the National Elections Authority announced the final list of candidates for the second chamber of the Egyptian House of Representative’s elections, which were cancelled in 2011 as one of the 25 January 2011 revolution’s demands. The Egyptian Intelligence Services decided to take over the council via the For Egypt list of candidates which included one of the criminals involved in the Battle of the Camel, according to a video that Egypt Watch has obtained from its sources. The attached video features Dr. Yasser al-Houdaiby, one of the members of the For Egypt list formed by the National Security and General Intelligence Services. Al-Houdaiby runs for one of the six seats allocated for the Wafd Party.

Dr. Yasser al-Houdaiby is the vice-chairman of the Wafd Party, a member of the Party’s Supreme Authority, and is responsible for the Party’s Committee of Parliamentary Affairs. He was the Under-Secretary of the Human Rights Commission of the People’s Assembly that was dissolved after the January revolution. The assembly was listed under the dissolved National Party during the elections that were largely rigged and were one of the reasons for the revolution’s outbreak.

Curiously, although al-Houdaiby lost the previous parliamentary elections in 2015, the Speaker of the House of Representatives, Ali Abdel Aal, appointed him a constitutional adviser for the parliament in May 2016.

Sources from Arab As Sawalhah Village, al-Houdaiby’s birthplace, said that the video published by Egypt Watch was taken of al-Houdaiby in front of the Mustafa Mahmoud Mosque in Mohandessin on February 2, 2011. In the video, he was among the thugs who later on attacked the revolutionaries in Tahrir Square, adding that some of those thugs were brought by al-Houdaiby from his village as well as the neighbouring villages for sums of money.

The sources said that al-Houdaiby was removed from the case of the Battle of the Camel in which a large number of the National Party’s symbols were accused because of his connection and relationship to Counselor Omar Marwan, the secretary-general of the fact-finding committee established to investigate the events and crimes of Mubarak’s regime during the January revolution. He also comes from a family from Shibin al-Qanater and has a close relationship with al-Houdaiby.

The supporters of the overthrown President Hosni Mubarak and the symbols of his reign attacked the people at the sit-in at Tahrir Square on February 2 to destroy the revolution. They used horses and camels for the attack aided by the Egyptian Army, which caused 11 martyrs to be killed and the injury of about 2,000 people.