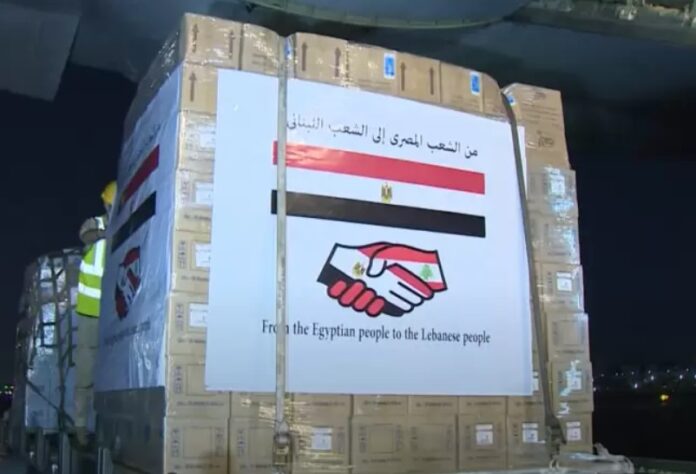 On Saturday morning, Egypt sent a second plane with aid to Beirut to help save the victims of the port explosion. The plane was loaded with 14 tonnes of aid via the relief air bridge that Egypt established after the explosion took place.

The Egyptian Ministry of Defence published a video on its official YouTube channel showing the takeoff and landing of the Egyptian military plane carrying the aid. The plane was received at Beirut Airport by the Egyptian ambassador in Lebanon Yasser Elwy and the Director General of the Lebanese Ministry of Health, Dr. Fadi Sanan. A number of public and non-governmental entities sent aid on that plane. Mersal Foundation announced that it sent two tonnes of emergency medical supplies, as well as a wide range of medicine. The plane also delivered a portion of aid covered by al-Azhar. Grand Imam Dr. Ahmed Ahmad al-Tayyeb decided to send an urgent relief convoy to Beirut headed by the Rector and Deputy Rector of al-Azhar University and comprising a large group of professors at the university’s faculty of medicine from the departments of emergency, orthopedics, plastic surgery, burns, neurosurgery, E.N.T, anesthesia and critical care, ophthalmology, and general surgery, besides large quantities of medical supplies and instruments, medicine, and food.

Some private sources told Egypt Watch that a shipment of aid and a doctors’ convoy are being prepared by the Egyptian Medical Syndicate to be sent urgently to Beirut in coordination with the Lebanese parties to identify what medicine, food, and medical supplies are necessary for Lebanon to overcome its crisis. The first Egyptian relief plane loaded with medical and food supplies took off last Thursday carrying nine tonnes of medical aid.

The Egyptian ambassador in Lebanon Dr. Yasser Elwy explained that Egypt has opened an air bridge with Beirut for the transfer of aid. This bridge is to include sending a plane to Beirut every 48 hours loaded with a batch of relief supplies over four stages. The Egyptian bridge is to provide quantities of flour to compensate for the loss of the grain silos destroyed by the explosion. Lebanese hospitals will be contacted to identify which medical instruments and supplies they need. In addition, the Federation of Egyptian Industries provided glass and aluminum for the rehabilitation of the cracks of buildings and structures caused by the explosion.

On Tuesday August 4, a huge explosion ripped through the capital, caused by a fire that erupted in one of Beirut Port’s warehouses where a shipment of about 2,750 tonnes of ammonium nitrate confiscated in 2014 was stored. Some 200 people have died, including three Egyptians. Around 5,000 people were injured and 300,000 made homeless.

Egyptians in Italy: Forgotten in the Coronavirus crisis