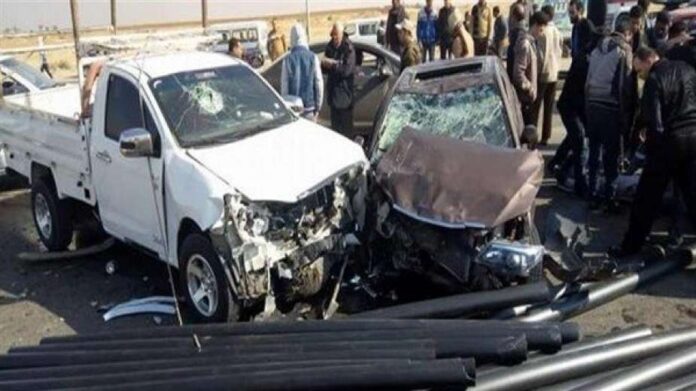 Not a day passes in Egypt without dozens of casualties and injuries due to road accidents in the various governorates. Road accidents cause significant human and material losses because of dilapidated roads that lack the lowest safety and security standards. Tragic accidents have even reached the newly established routes, such as the regional ring and the central ring. The shabby roads, the absence of lighting at night, and the absence of services despite the collection of fees from passing cars show the extent of corruption and disdain for citizens’ lives.

Recently, activists noted poorly constructed bridges and the absence of maintenance, to the extent that some even collapsed shortly after they were built. Newspapers in Egypt carry daily news of tragic accidents in which young men, workers, children, and sometimes newlyweds, are killed during their wedding.

The greatest tragedy was in January 2020 when five female doctors from Minya Governorate were killed, and 16 others injured in a microbus accident that was carrying them to attend mandatory training at the Ministry of Health in Cairo.

According to the Central Agency for Public Mobilisation and Statistics, the number of road accidents in Egypt in 2018 reached 8,480. Despite the fact that the number is shocking it is less than in 2017 when the number reached about 11,000 accidents. The number of people killed and injured as a result of car accidents during the first half of 2019 reached 7,613, with a monthly average of 1,269 people. A report by the Ministry of Transport and Communications in Egypt, published by Egyptian newspapers, revealed that the cost of road and traffic accidents in Egypt exceeded the barrier of EGP 40 billion ($2.5 billion) in 2017.

According to a study issued by the Central Agency for Public Mobilisation and Statistics on “the economic cost of road accidents in Egypt in 2017,” the human factor came first in the causes of road accidents with a rate of 78.9 per cent, followed by the technical condition of the vehicle by 14 per cent, then the road condition by two per cent.

A road consultant, Prof. Osama Okail, explained in a press interview that a large part of road accidents in Egypt have resulted from large transport vehicles. He said, “Trucks make up about 20 per cent of the vehicles on the roads, and mixing those trucks with regular cars on the road leads to a high possibility of accidents. According to several statistics, 40 per cent of road accidents in Egypt [are from] trucks.” Okail added: ” Only can we hold the driver fully responsible when the government provides all road safety factors.”

Hesham Arafat, the former Minister of Transport, said: “The destruction of the road network in Egypt during the past 35 years was due to the [use of] diesel, which led to a focus on transporting goods on the roads only.”

According to a report issued by the World Health Organisation, citing the Central Agency for Public Mobilisation and Statistics and the Egyptian Ministry of the Interior, the death rate due to road accidents has reached nine out of every 100,000 people. These figures are despite promises by General al-Sisi before his candidacy for the presidency to establish a new road network connecting all parts of the country. However, roads and bridges continue to collapse and be swept away by torrential rains. Reports of the World Health Organisation showed that Egypt is still leading the world ranking in road accidents with more than 25,000 dead or injured annually. The reports also mentioned the damage to more than 19,000 cars and vehicles, as experts estimate the value of losses at EGP 30 billion ($1.9 billion) annually.

According to recent data from the Ministry of Transport, 40 per cent of old bridges and roads have expired and have become a danger to citizens, because they have not been maintained. But the problem is that even new roads and bridges collapsed months after they were constructed, amid accusations of corruption against the Armed Forces Engineering Authority (who built them) of fraud, conspiracy with contractors and theft of road materials.

The danger of the time bomb increases as external debt rises...

Cairo’s new capital: Is it turning into a city of ghosts?