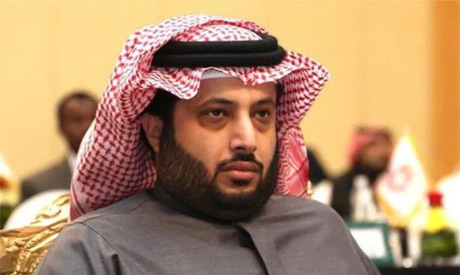 Despite the fact that Egyptian citizens hate him, a Saudi official and investor has penetrated the cultural, artistic, sports, and even political circles in Egypt. Still, it seems that the highest Egyptian authorities support him.

Turki al-Sheikh is a name that has been mentioned a lot over the past few years since he has become very present through his media, sports, and artistic influence. Through the al-Ahly Club portal in Egypt, the President of the Saudi General Authority for Sports, Turki al-Sheikh, appeared as an honourary president of the al-Ahly club. Later, he left al-Ahly after accusing the al-Ahly board of directors of refusing to let him interfere in the club’s technical affairs. Turki al-Sheikh’s accusations against al-Ahly officials and his insulting comments about them on his Facebook page prompted al-Ahly fans to swear at him collectively in a soccer match.

The Saudi official decided to invest in a new club that he bought and changed its name from al-Assiouti to the Pyramids. He also established a satellite channel bearing the name of his new club and then returned to close the channel abruptly, announcing his withdrawal from the new club’s leadership. Al-Turki then reconciled with Al-Ahly officials and announced that his cases against them were waived. Still, he returned to say that the al-Ahly club had removed its name from the record of the old club’s honourary presidents.

Turki al-Sheikh is keen to show his strong relationship with officials in Egypt, and published photos with General Abdel Fattah al-Sisi, after his success in 2016 in calming the atmosphere and media bickering between Cairo and Riyadh. It is unknown exactly how al-Turki was able to quickly ease this media tension after a meeting with al-Sisi in 2016, during which he carried a message from King Salman to al-Sisi as an advisor to the Saudi royal court.

Al-Sheikh set his foot firmly in the media field targeting Egyptian public opinion by contracting with the most expensive Egyptian broadcaster in the Middle East, Amr Adib, after acquiring MBC and Rotana channels. Al-Turki took possession of the channels after the arrest of their owners in Saudi Arabia for alleged corruption of al-Walid al-Ibrahim and al-Walid Bin Talal, starting a new phase of the Sheikh’s influence.

The man was not satisfied with his control over Egypt’s media field, especially the sports media, through a group of sports media, match analysts and critics who worked on the Pyramids channel and other sports channels. But al-Turki is always keen to appear as a supporter of charitable and social projects in Egypt, and he announces this through his social media accounts.

After his controversial Egyptian sports interventions, Turki al-Sheikh gradually penetrated the Egyptian artistic community, prompted by Saudi supreme orders and questionable official Egyptian silence. As the Chairman of the Board of Directors of the General Entertainment Authority in Saudi Arabia, he signed several memoranda of understanding with a group of Egyptian artists, which would support the entertainment sector in Saudi Arabia.

The media also circulated several pictures and clips of al-Sheikh with singers, artists, and media professionals. The most prominent of them were the artist Amr Diab, the artist Mohamed Hamaki, the journalist Amr Adib, the artist Rajaa al-Jeddawi, Mohamed Heneidy, and the composer Amr Mostafa.

The widespread hatred for this man is obvious from the comments people leave on his Facebook posts. Despite this, he enjoys defending and beautifying his image and Egyptian journalists and media writers describe him as an investor who loves Egypt and wants to benefit its people, despite warnings from experts on the impact of his childish behaviour vis-a-vis Egyptian-Saudi relations.

Many Egyptians see al-Turki as a picture of what the current ruling classes look like in most of the Arab Gulf states, especially Saudi Arabia and the UAE: Countless funds, huge nominal positions, almost no experience, and meager skills that do not prevent the owner from achieving progress in vital political or non-political fields.

How can you fabricate a demonstration?