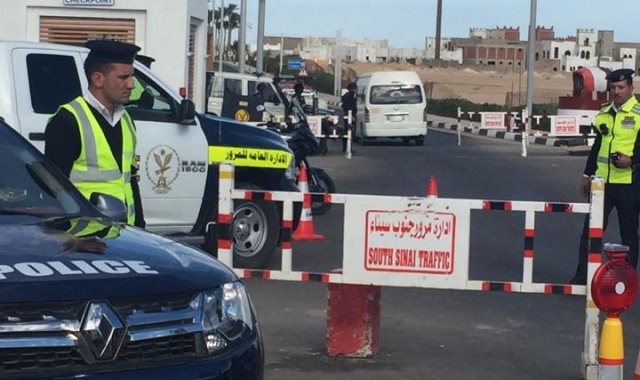 “Are you Muslim or Christian?” This was the question directed at an Egyptian travelling to South Sinai for a summer vacation, as the security services prevent the passage of Christians, army officers, police, and judges through these roads on the grounds that they cannot secure them. Since 2017 and until today, many people have reported on social media of being stopped at the army and police checkpoints deployed on the roads leading to Sharm el-Sheikh, Dahab, and Nuweiba. They explained that after they were searched, they were asked – while carrying personal IDs – about the presence of Christians among them.

According to many accounts, if the answer is yes, they should cross through the main Sharm el-Sheikh road with a security car and not pass another route through the Nakhl area that leads directly to Nuweiba. The army and police forces stationed before a tunnel crossing the Suez Canal justify to them that Christians, judges, and leaders of the armed forces are prohibited from entering, for fear of being targeted on this insecure road. The matter raised eyebrows among many Egyptian Christians who wish to travel to South Sinai. A female citizen said in a complaint to an Egyptian newspaper: “I do not know how I’m Egyptian and prevented from travelling somewhere in my own country?” She added that she later learned that they also prevent tourist buses from going there, and it was said that the whole issue is related to insurance. But if this is the case, she asked, why are Muslims allowed to travel there? Naturally, we are all Egyptians and the state fears for its citizens.

Frequent testimonies from citizens travelling on the roads of South Sinai confirmed the prevention of Egyptian Christians from travelling to coastal cities through the road that passes through the town of Nakhl. A frequent question from taxi drivers and tourism company employees to the passengers on buses travelling to South Sinai is about their religion, and if there is a Christian, the reservation is cancelled.

Despite all of this, the director of South Sinai Security denies the validity of this and said in press statements: “I do not know where people heard this, as the direct Nuweiba road or from Dahab city is wholly secured, and security forces are deployed along the route.” However, a recreational trip to Taba, organised by the Journalists Syndicate in 2018, excluded some of its Coptic members, who paid the reservation amount on the trip and informed them of the refund of the reservation value, based on security instructions.

At the time, sources within the union said that after the number of participants in the trip was completed, the syndicate sent a list of names and pictures of their national ID cards to one of the security services, which in turn, objected to four Christian members. He explained that the objection is due to an unannounced decision that Copts, judges, and police officers cannot take the route of that trip, due to a threat to their lives.

One of the Coptic journalists, Isaac Ibrahim, who was excluded from the trip, said: “Shame on the Journalists Syndicate to make the trip to Taba after the security services excluded Christian journalists on the pretext of security reasons. What happened was a discriminatory message and the failure of the state.”

The accounts of travellers to South Sinai confirm that Egyptian Christians, judges, and officers are prevented from crossing on some roads, and sometimes prevented from crossing the Suez Canal, having to take a road that doubles the duration of the trip. In North Sinai, security checkpoints prevent any citizen from crossing them, regardless of his religion or job, as long as he does not carry an identity card proving that he is a resident of one of the cities and centres of North Sinai.

Although the church leadership in Egypt declares that Christians in Egypt enjoy a fair treatment from the authorities after they supported the military coup in 2013, the societal situation shows otherwise. In February 2017, about 40 Christian families fled the city of Al-Arish to Ismailia city, after unidentified shooters killed seven Christians in separate incidents in North Sinai. The governor of North Sinai also issued a decision to government departments, schools, and universities, that Copt employees and students should be absent from work until the security situation stabilises.

Double standards in the Mubarak regime’s prisons and the opposition’s detention...