In Alexandria, three retired high-ranking armed forces officers were arrested by the security forces against the backdrop of the removal processes currently taking place in Egypt.

One of those who were arrested is the retired General Hashem Abu el-Fadl Abdel Baki, aged 74 years old, a former commander of the Air Defence Forces who fought in the October War in 1973, was awarded the Order of the Republic, the Military Medal of Courage First Class, and the Medal of Long Service and Good Example, and was lately decorated by the Ministry of Defence, the Air Defence Force Command, and the Second Field Army Command. The retired Armed Forces Colonel Alaaddin Ahmed Atiya Ibrahim, aged 62 years old, and the retired Armed Forces Brigadier Ahmed Maher Ahmed Ali al-Bassiouni were also arrested because they objected to the demolition processes that affected the Lagoon Club in Alexandria.

The governorate had begun the demolition processes under the instructions of President Abdel Fattah al-Sisi, starting with knocking down downtown wedding halls and those in the Carrefour area because of the expiry of their tenants’ contracts. These operations had previously exempted the Lagoon Club and its hotel because of the presence of a usufruct up to 2048. Two weeks ago, however, the destruction processes affected the club by demolishing the back wall separating the club and the International Park, an incident that was repeated again a few days ago in the early morning hours, and that was when the club members stood up against the processes. The club management emphasised that there is a usufruct for 30 years that started in 2018 by approval of the Ministerial Committee on investment dispute resolution and the cabinet.

One of the Board of Directors members told Egypt Watch that the Lagoon Club is an investment that started in 2004 and a usufruct with the governorate was obtained from the Ministerial Committee on investment dispute resolution, then from the cabinet in the middle of 2017. Since then, all the dues were paid off from the subscriptions of the members who amount to more than 30,000 and are serviced by 500 workers. The source added that the club has paid the monthly invoices of the lease up to this September just a few days ago with an amount of EGP 1.1 million ($69,638). The source explained that the total amount that the governorate received from the club over the past few years is about EGP 130 million ($8.2 million).

The source indicated that the Chairman of the Board of Directors of the International Park notified the club’s board of directors verbally of the necessity of evacuating the place within seven days, without receiving any official letters. At the same time, the company has in its possession an official letter from the governorate of Alexandria asserting that the official contract ends in 2047 for both the club and the hotel, whereas the usufruct for the shops ends in 2031. The source stated that three members of the club’s board of directors were arrested when they objected to the demolition works, and they are the retired General Hashem Abu el-Fadl Abdel Baki, the retired Colonel Alaaddin Ahmed Atiya Ibrahim, and the retired Brigadier Ahmed Maher Ahmed Ali al-Bassiouni, all of whom are former armed forces officers.

A state of indignation swept over Egypt following the demolition processes and the fines imposed by the government for the construction violations and infringements, which urged al-Sisi to say that he is willing to organise a popular referendum on his continuation in power in the event that the Egyptian people are not satisfied with the procedures he is taking. During opening some developmental projects in Alexandria last week, al-Sisi said, “Either we stop the violations and become a proper country, or I leave my position and go away and let somebody else take over the country to waste or destroy it.” He continued, “No, I won’t allow it. We must take action, and we brought equipment enough to remove all the violations. If people don’t like this speech, a popular referendum should be held on whether we stay or go away.” Then he addressed the commander of the army, and said, “The state with its institutions is responsible for safeguarding Egypt, Mohamed Zaki. I will never allow the destruction of our country or wasting it like that. Can anyone imagine that! No, by Allah, if it came to that, I will make the Egyptian army go to all the Egyptian villages. I am talking to you so that you understand that either we stop and be a proper country or I leave my position and go away.” 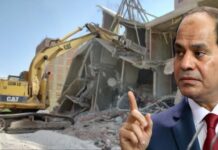 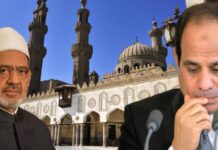 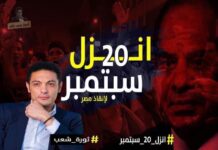 September 20: A new national date for protesting against al-Sisi’s tyranny