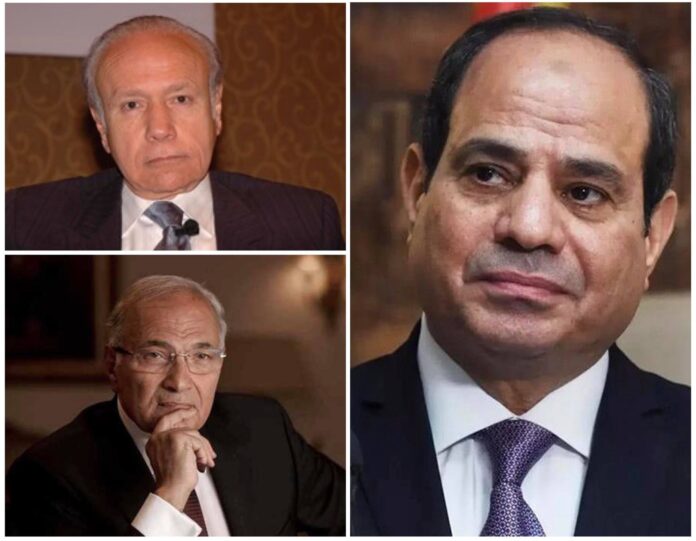 A few days ago, a media and judiciary attack on Lieutenant General Ahmed Shafik, former prime minister and presidency candidate, and the business tycoon Salah Diab, one of the most important agents of foreign companies in Egypt who is well-known for his relationships with Israel, took the Egyptians by surprise. This attack comes as al-Sisi takes revenge on both men.

A few days into the attack on the two men its direct cause was leaked. It was revealed by some people close to Lieutenant General Shafik that the two men met for dinner in a luxurious house belonging to Diab in the North Coast in late August. That dinner was under the watch of the National Security Service that bugged the villa with microphones and a spy camera. These devices were able to record the conversation between the men during dinner.

The sources said that during dinner, Diab described al-Sisi as an “idiot” during his talk about al-Sisi’s negotiations with him and his attempt to force him, i.e., Diab, to pay EGP 600 million for reconciliation in the New Giza case, in addition to EGP 1.25 billion in taxes. Shafik repeated the same description of al-Sisi when he said, “As you said, he is an idiot. No one is paying him from outside the country, and he is collecting as much as he could from the inside,” in reference to the end of international assistance and aid that al-Sisi is trying to compensate for by collecting money from people in Egypt.

In April 2016, the Illicit Gains Panel headed by Consultant Adel el-Saeid discontinued investigating Diab and his partner Mahmoud el-Gammal, the overthrown President Hosni Mubarak’s son-in-law, in the matter of the New Giza Company. The case was closed after el-Gammal paid the state EGP 238.72 million for the difference in the price of the land they obtained.

The public prosecution referred the case in which Diab and el-Gammal were involved, along with 15 others, to the Illicit Gains Panel. They were accused of violations concerning the procedures of land allocation and unfulfilling the state’s dues for selling the land, nor the waiver fees. These violations were estimated by the panel to be equal to the amount that they later on paid.

During the dinner, Diab said that he will not yield to the pressures exerted by al-Sisi the way businessmen Mohamed Abou el-Enein, Ahmed Abou Hashima, and Naguib Sawiris often do. Shafik then answered him by saying, “He is just a naïve soldier from the infantry,” referring to the infantry corps.

The public prosecution ordered Diab to be detained for 15 days pending investigations on charges of seizing lands owned by the state, building unlicenced factories on these lands, evading the payment of an amount of EGP 11.14 billion due to the Taxes Authority, besides other cases concerning spoiled, anonymous, and smuggled foods.

In November 2015, Diab and his wife were arrested on charges of illicit gains, breaching the contracts related to the land of the New Giza City on the Cairo-Alexandria Desert Highway (within the range of the 6th of October City), and purchasing the land for less than its value, then exploiting it in building a residential project. These incidents were considered by the prosecution illicit gains and squandering of public money.

After they were released, they were arrested again in November of the same year from his villa in Manil Shihah, Giza for possessing two automatic rifles. The Giza prosecution, at the time, ordered his detention pending further investigation.

In February 2016, the Court of Appeal against Misdemeanor – the Economic Court – sentenced him to six months of imprisonment, a fine of EGP 20,000, and a bail of EGP 5,000 for suspension on charges of insulting the Chairman of the Zamalek Club and harassing him.

Diab is one of the largest Egyptian businessmen who is well-connected to the USA. His family controls 43 of the American agencies, the most important of which is the agency of Halliburton for Oil Services owned by former American Vice-President Dick Cheney. In addition, he has the agency of La Poire and On the Run chains, owns al-Masry al-Youm Newspaper, and has strong relationships with Israel and extensive trade with Israeli agriculture companies.

In an interview with Egypt Watch, sources close to Diab said that Diab’s problems with the regime originate from two issues, namely his refusal to let the Intelligence Service take over al-Masry al-Youm newspaper, which he owns, after rejecting the offers and pressures exerted by the service. Secondly, there is the issue of the “royalty,” as he calls it, and by that he means businessmen’s donations to al-Sisi’s fund box. Diab refuses to pay al-Sisi any sum of money in exchange for his refraining from objection, which most of the Egyptian businessmen do.

As for Ahmed Shafik, he was retried in the case of intentionally squandering the public money owned by the Holding Company for Airports and Air Navigation. The case was known as the “case of aviation corruption,” and he was acquitted in 2013. Shafik attended the first session of the proceedings that was held on 5 September of this year.

The investigations of this case started in 2012 when Shafik, the previous Minister of Civil Aviation, Ibrahim Manna, and the previous Chairman of EgyptAir Holding Company, Tawfik Mohamed Asy, were accused of squandering a sum of EGP 25 million.

The investigations indicated that Shafik had ordered the two holding companies of Airports and Air Navigation and EgyptAir to pay the above-mentioned sum to Masr al-Jadidah development Society that was chaired by Zakaria Azmy, the former chief of presidential staff of Hosni Mubarak. The money was claimed to be for the contribution in purchasing children’s toys and amusements for the Suzanne Mubarak Park in Masr al-Jadidah.

The court acquitted Shafik in 2013, but the case was reopened again after more than seven years following Shafik’s conversation with Diab.