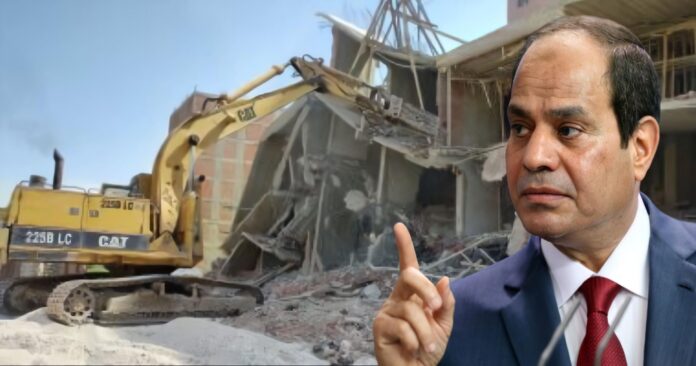 The Egyptian government has expanded its threats to remove thousands of homes and villages, followed by the massive dispatch of bulldozers and equipment to expel families from their homes in various Egyptian towns and cities.

Over the past few days, the Egyptian government removed thousands of inhabited homes. It expelled thousands of families from them, claiming that they were built illegally, which created a state of anger and resentment among citizens. The removal campaigns came despite the government’s announcement of a reconciliation law in construction violations and a request to legalise the situation until the end of this September.

On social media, video clips spread showing the state of anger and discontent among the citizens, amid the cries of displaced families, whose homes were demolished. Some residents tried to prevent the bulldozers from demolishing their homes, which led to clashes with the army and police forces accompanying the demolition campaigns, which saw many residents arrested and detained pending investigations. The Egyptian regime justified those campaigns, that many see as brutal, because of the violators. Still, observers say that the issue is more profound than that and that the system pushed the people to violate the building rules.

In conjunction with the escalation of the removal campaigns, Egyptians launched a hashtag entitled “al-Sisi, demolishing our homes.” It was among the most discussed topics during the past days. Activists said that these homes were built after the local councils’ approval and under their eyes and that if there is accountability for these violations, it is the corrupt officials that must be held accountable. Some activists have asked why these homes are being demolished, while the government ignored the encroachments and corruption of businesspeople and sectioned off large areas for the armed forces.

Participants also asked if the government is demolishing citizens’ buildings under the pretext of encroaching on state lands because the Nile Corniche from the Shubra area to Helwan is full of clubs, cafes, and halls that encroach on the Nile and are not being removed. Others supported the removal of all violations, but on the condition that compensation is provided to the people, whether financial or alternative, considering that what is happening is a full-fledged crime because the right to housing is one of the fundamental rights of the citizen that is protected by the constitution. According to experts, all the buildings built in Egypt received approvals from the government, localities, housing, and the rest of the concerned authorities.

Egyptian President Abdel Fattah al-Sisi had hinted that the army would be sent to all villages in Egypt to eradicate and remove what he described as transgressions. He added during the inauguration of a project in Alexandria governorate that he was ready to leave power if the people demanded it. Al-Sisi responded to the citizens’ anger at the removal of buildings and mosques, by saying, “If people do not like this, let them conduct a referendum and leave.” After al-Sisi threatened to send the army to all villages to carry out clearance, the video clips showed the intensification of the demolition campaigns and the forcible evacuation of homes, especially for dozens of residential towers in the city of Ras al-Bar in Damietta Governorate.

According to the governorate’s official page, the governor of Dakahlia also announced removing 1,200 homes and the evacuation of 3,700 families. These campaigns coincide with widespread anger at the demolition of dozens of mosques in Alexandria and the lake to implement the Mahmoudiya Bridge and what preceded the destruction of the ancient Mamluk tombs in Cairo to build a traffic axis.

The ferocity of the removal campaigns came although the deadline for reconciliation in construction violations had not expired, as the government announced that it would not extend the deadline after September 30. Egyptians’ calls on social media have escalated, rejecting the Reconciliation Law’s amendments in some building violations. Through this law the government aims to collect billions of pounds from citizens, who are already suffering from dire living conditions.

Egyptian activists launched more than one closed group on Facebook, including “No to the Reconciliation Law … We do not have money”, to record their objection to the law amendments because of their unconstitutionality on the one hand, and their inability to pay the sums required for reconciliation and the fines contained in the law on the other hand. The high costs of reconciliation come at a time when Egyptians live in challenging economic conditions, as a result of subsequent government decisions to raise the prices of all essential goods and services.

In Egypt coronavirus testing is only for the rich