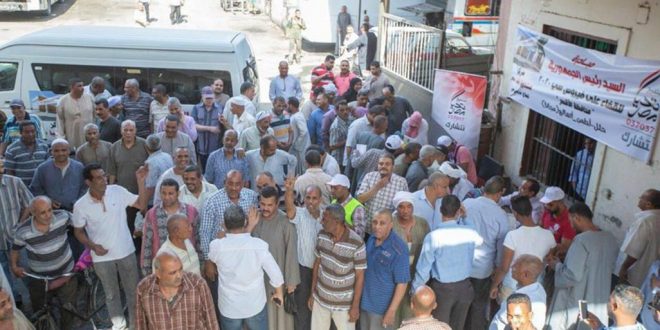 Despite the severe repression and the fierce security grip, the workers’ demonstrations and protests in Egypt and the expression of their anger through strikes and sit-ins did not stop. During the past two years, workers’ demonstrations and news of arrests in their ranks reappeared in light of an internal media blackout on news of labour protests.

The anger of workers in Egypt and the factional demonstrations demanding rights was one of the preludes to the January 2011 revolution, and its intensity escalated enormously after the revolution. Still, the increasing repression after the military coup in 2013 was one of the reasons for the dampening of the workers’ revolutions. The increase in labour anger recently comes despite the repression and arrests resulting from the difficult economic conditions that Egyptians suffer from, especially factory and company workers.

At the same time, instances of tension and frustration in society are increasing due to the al-Sisi regime’s actions against citizens, most notably the campaigns to demolish homes and mosques, in addition to calls for anger and revolution against the regime this September.

On September 8, the security forces arrested an unknown number of employees of the Misr Spinning and Weaving Factory in Shebin el-Kom for organising a protest in front of the administration building to demand their financial rights. The number of factory workers reached 7,111 workers, and these workers did not receive their wages from August until now.

The Centre for Trade Union Services said, in a statement on its Facebook account, that since the last Eid al-Fitr, the factory management has refrained from disbursing the holiday grants and the clinic allowance, which is a cash allowance paid to workers monthly at the rate of EGP 100 per worker. Workers have repeatedly called on the administration to disburse the back grants that fall within the wages supplementing the meager salaries paid by the administration.

The statement pointed out that according to the workers, the average wage for those who spent more than 15 years at work is only EGP 2,000 (approximately $127). He added that the last period witnessed the administration issuing decisions suspending and dismissing 15 workers whom the administration believes are leaders among workers for claiming their financial rights without clear justification or committing acts requiring dismissal according to the law.

The continued repression and arrests of workers claiming their financial rights have resulted in condemnation by international organisations, including the International Labour Organisation, which added Egypt to the blacklist of countries that violate workers’ rights and freedom of association. Earlier, Amnesty International said that dozens of workers and trade unionists in Egypt were arrested, dismissed, or tried before military courts, for merely exercising their right to freedom of expression and association. According to the organisation, amid an escalating economic crisis in Egypt and a wave of workers’ strikes in the public and private sectors and industries owned by the army, the government uses a series of disciplinary and criminal measures to crack down on workers and trade unionists.

It noted that it is also seeking to tighten existing laws to increase restrictions on workers’ rights, as the regime is aware of the risk of social unrest by workers’ demonstrations. Last December, the Egyptian Commission for Rights and Freedoms said that the security forces had arrested about 170 workers from investment factories in Port Said Governorate. This happened after the authorities dispersed the factory workers’ sit-in in protest of the decision to change their place of entry from the main gate to the back and secondary entrances far from the main street. The commission quoted the workers’ families as saying that about 70 girls and 100 young men were arrested and detained in the Central Security Camp in Port Said.

The year 2019 witnessed a series of strikes in several major companies, whether they belong to the public or private sectors. Thousands of workers went on multiple strikes in Cairo, Giza, and other governorates nationwide.

The strikes and demonstrations came in protest against the deterioration of living conditions, delayed payment of dues, corruption of health services and health insurance, and the departments’ failure to meet their demands for better wages, bonuses, and annual increases. The strikes and protests covered many sectors, including the strike of the General Authority of the Book workers, the workers of the Faiyum Sugar Company, the workers of the investment zone in Ismailia, the workers of Eastern Tobacco, the Universal Industrial Company, Epico pharmaceutical, Minya Cement, and others. Anticipation remains for what will happen over the coming days while growing cases of societal discontent and anger prevail in what observers consider the locomotive of movement and change in Egypt in the face of a regime that knows nothing but repression.

Deaths in Egyptian prisons increased during 2021 to 46 cases

What is the future of the USD and the EGP?