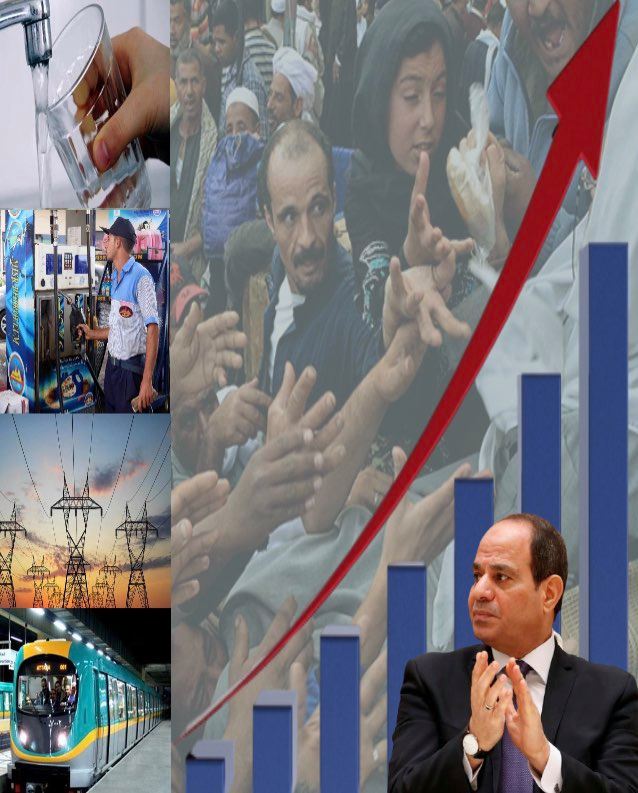 At the hands of Abdel Fattah al-Sisi’s regime, the Egyptian state resorted to another kind of interaction between a state and its citizens. According to the normal practice since the emergence of the modern nation state, political regimes are to use the state’s resources to provide services to its citizens. In return, the state collects taxes and fees to spend on these services. The method that the governing Egyptian regime is implementing these days, however, is much like that of a businessman who takes advantage of people and workers, and even forces them at gunpoint to pay money to be spent in a manner completely out of any service for their needs. The money is collected by ordering and terrorising people, which is similar to what bandits or gangsters do.

At a time in which basic services like healthcare, education, and security deteriorated and their costs became too expensive, the state is trading with the citizen and profiteering from these services at his expense. The people have no oversight over these profits and do not know where they are spent. Regarding electricity, the Chairman of the Sovereign Fund of Egypt affiliated to the president revealed that Egypt started discussing and making plans to export Egyptian electricity to Europe and Africa. He indicated that Egypt has the benefit of producing electricity at a low-cost thanks to its renewable energy sources.

In an interview with Bloomberg, an American news agency, Ayman Soliman explained that Egypt has surplus electricity of about 10 gigawatts, which constitutes a fifth of its electricity production of 50 gigawatts, not counting the amount of electricity that will be generated from the nuclear plant that Egypt contracted with Russia for at a cost of $30 billion. During the conversation, Soliman specified an amount of 2.4 cents (45 piasters) per kilowatt as a profitable price for exporting the energy, adding that the selling price to the industrial sector in Egypt is about 9 cents per kilowatt.

At the same time, the government raised electricity prices for citizens six times in the six years since Abdel Fattah al-Sisi’s reign began. The cost per kilowatt for homes in the highest segment (the sixth) is 145 piasters, which means that the government makes a profit off the citizens of 100 piasters (EGP 1) for every sold kilowatt (EGP 1 million per gigawatt).

As for fuel, it also indicates the regime’s callousness and disregard for the people. Since the coronavirus pandemic started there has been a sharp decrease in the prices of fuel under the severe decline of manufacturing operations and travel, as well as the closing of the borders of most countries to stop the spread of the virus. Despite all that, the regime did not decrease fuel costs for the citizens, but, on the contrary, increased them. The government fixed the prices for fuel saying that it is selling it to the citizen at world prices (without support) despite the decline of the price per barrel to range between $40-44/barrel after it was $65-70/barrel.

The Egyptian Ministry of Finance determined the price of a barrel of oil in the current fiscal year’s budget (2020/2021) to be $61/barrel, compared to $68/barrel last year. This means that the government makes a profit of about $20/ barrel of oil (Egypt consumes about 600,000 barrels of oil daily).

At the same time, Prime Minister Mustafa Madbouly announced opening the door for investment in potable water and sewage for the private sector, especially in seawater desalination projects. Asem el-Gazzar, the Minister of Housing, explained that the government has already started the negotiations with a number of companies wishing to invest in the potable water and sewage projects and that the negotiations will be finalised for a number of projects in some of the governorates. As for Abdallah el-Ebiary, the Chief Investment Officer in the Sovereign Fund of Egypt, he said that the projects of desalination plants and wastewater treatment attract the attention of local, regional, and international investors, adding that “it is the perfect time to make money off these projects.”

What is bizarre is that these categories as well as the other dozens of categories and services whose costs have increased and off whom the state is making hundreds of billions of pounds, were not matched by an increase in the state’s spending on the essential issues that concern the citizen. Whilst the state is collecting as much money as it can from the citizens’ pockets, the new budget has undergone a total decrease of 18 per cent in the government support directed to the citizens, with a total of about EGP 140.7 billion for the support compared to EGP 171.8 billion in the past fiscal year that ended on 30 June 2020. The most prominent aspect of the declined support was that of the subsidies, which was lowered by more than EGP 3.5 billion to reach EGP 84.4 billion compared to EGP 89 billion in the past fiscal year.

The sectors that mainly concern citizens also did not also witness any significant improvement. EGP 93.5 billion was allocated to the public health sector in the new year in contrast with EGP 73.1 billion for the ended year contrary to what the Minister of Finance, Mohamed Maait, promised before the House of Representatives to increase spending on health to EGP 258 billion. The allocations for the education sector amounted to EGP 175.6 billion, including the allocations for pre-university education with all its levels, higher education, education not identified by a certain level, the services of assisting education, research, and development in the area of education, the Public Authority for Literacy and Adult Education, the General Authority For Educational Buildings, and the Education Development Fund.

The total allocations for health, pre-university education, higher education, and scientific research sectors together amounted to only 3.65 per cent of the budget of the fiscal year 2020-2021. The constitution specified in its articles number 18, 19, 21, and 23 that the state is committed to allocating a percentage of the government spending of no less than three per cent of the national product for the health sector, four per cent for pre-university education, two per cent for higher education, and one per cent for scientific research. So, if these were the items of expenditure, where did all that money collected from the citizens’ pockets go?

Seven years since the biggest massacre in Egypt’s modern history the...

Egypt’s executions are a warning to the September protesters