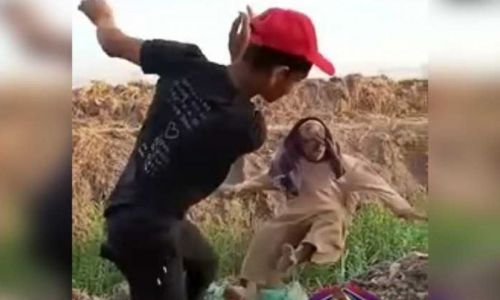 Social networking sites revealed a societal scourge in Egypt that has existed for a long time and is increasing significantly recently. It is the phenomenon of bullying and mockery of others, which often amounts to racism, especially towards dark skinned people. The circulating video clips showed the spread of the phenomenon that was not shown to the public before. Some incidents of bullying were shocking to the followers, mainly as they occur with children and older people with a physical or intellectual disability.

The most recent shocking incident was in Sohag governorate after a video clip was circulated that included some boys bullying an older man while standing on a canal’s edge. The shock caused by the video clip and the resentment on social media prompted the security services to investigate the incident and announce the arrest of three young men who attacked the elderly man.

The security services announced that the victim was mentally disabled, residing in the Maragha Police Station in Sohag Governorate, and that there were three perpetrators. From time to time, video clips and accounts appear online, which show the spread of bullying incidents, especially in schools and on public transportation, against children and the disabled. Incidents of bullying often amount to clear racism against black people of African nationalities, who are in Cairo to study at al-Azhar or work in various fields. Racism not only affected Africans, most of whom were Sudanese and Ethiopian, but also affected the Egyptians from the Nuba, who have dark skin.

One of the most prominent of the recent incidents of bullying in Egypt is the suicide of a girl in Alexandria, in the north of the country, due to her being bullied by the institute’s supervisors. The prosecution also decided to imprison an Arabic language teacher in Damietta, who bullied his student and made fun of her skin colour. Last July, the first judicial ruling of its kind was issued in Egypt, imprisoning two defendants for two years and fining them EGP 100,000 (about $6,250), due to the incident of bullying and beating a Sudanese child in a popular neighbourhood in Cairo. It is noteworthy that data indicates that 70 per cent of children in Egypt are exposed to bullying by their peers in schools and the surrounding environment.

According to data issued by the National Council for Childhood and Motherhood, the council received about 50,000 calls from children and parents as part of the “I am against bullying” campaign. Child bullying counselling services reached an average of 2,000 calls per day. The spread of the phenomenon prompted the Egyptian Cabinet to approve at the end of last July a draft law amending the articles of penalties that includes, for the first time, the word bullying as a punishable act.

The amendment stipulates that every show of power or control of the perpetrator, or the exploitation of the victim’s weakness or a situation that the perpetrator believes is offensive to the victim, is considered bullying. Reasons for bullying include gender, race, religion, something physical, health status, mental status, or social class, with the intent to intimidate him, mock him, demean him, or exclude him from his social surroundings.

Social media revealed that bullying came in conjunction with the emergence of racism against black Africans in Egypt. Sameh Shoukry, Minister of Foreign Affairs, was forced to conduct an immediate investigation after a Kenyan official accused the head of the Egyptian delegation at a Nairobi conference of describing Africans as dogs and slaves. Daily, Africans in Egypt are exposed to abuse, physical and verbal assault, bullying, and sometimes coerced theft, especially with the Renaissance Dam escalation.

Fatima Ali, the former Miss Sudan who lives in Egypt, has documented in her blogs the forms of discrimination, verbal harassment, and harassment that she is exposed to in Cairo because of her skin colour. According to experts, Egyptian cinema played a role in establishing stereotypes about black people and ridiculing them. Nabil Abdel Fattah, an expert at the al-Ahram Centre for Political and Strategic Studies, attributed this crisis to elitist culture.

Abdel Fattah al-Sisi believed that Egyptians’ racism against black Africans has historical roots dating back to the era of the rule of Muhammad Ali and his family in Egypt and his work on bringing Sudanese to Egypt forcibly to recruit and work in arduous jobs. Others, however, see that the regime’s tyranny and the promulgation of hate speech in the Egyptian media are the most critical factors in increasing racism in society between Egyptians and towards other nationalities.

Sisi’s Egypt: The punishment of thinking is imprisonment

Are we on a date with the collapse of the cement...