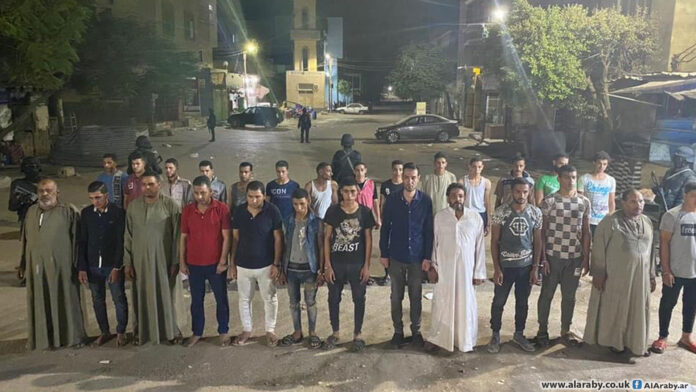 Supporters of General Abdel Fattah al-Sisi justified the sudden demonstrations that lasted for more than a week with several accusations against the ruling regime. Al-Sisi’s supporters said that these protests are children’s quarrels and asserted that the protesters belong to the Muslim Brotherhood, the largest opposition group in Egypt, and tried to ridicule the protesters who appeared in Egyptian villages wearing galabiyas. Al-Sisi’s supporters also tried to emphasise that there are only a few protests, and that the participants have been deceived.

Videos circulating on social media showed the participation of large numbers of young people and children, which was met with mockery from al-Sisi’s supporters, trying to emphasise that this is evidence that they do not represent the Egyptian people. The Egyptian security forces arrested some Nubian children during the protests in the south of the country. Despite mediation and confirmation of their imminent release, the Egyptian authorities deported them to Cairo in preparation for investigation and trial. Opposition sources reported that at least one child, Nasser Hamdi Ismail, 13, died after being hit by the Egyptian police’s birdshot pellets which they fired at protesters.

Al-Sisi’s supporters mock the participation of children in these protests. The Egyptian journalist Mohamed al-Batawy responded to these allegations in an article he posted on Facebook, stressing that children participate in every significant revolution. The Egyptian journalist residing abroad cited what Victor Hugo wrote in Les Misérables about Gavroche Thénardier, who was killed by the fire of the king’s soldiers in the French Revolution. Al-Batawy wrote: “It is painful and shocking when you read the end of Gavroche, as well as the suffering of every Gavroche lying on the sidewalks of his country in a street or a cell, bleeding his blood or his life, and he tries to continue singing, chanting ‘Long live the republic or the revolution.’ He tries to cross the barricades of the factions of the homeland to reach freedom and dignity far from the existing suffocation.” He considered that children’s participation is a stain on the regime’s forehead, which was unable to protect them or provide them with a decent life. Instead, it arrested and killed them.

Al-Sisi’s supporters described the participants in the September protests as belonging to the MB, at a time when the group has not officially announced signifiant participation in the protests.

The Egyptian pro-state journalist Mounir Adeeb said that the participants in those protests are children and MB members, and they do not represent the Egyptians’ requests. But the words of Adeeb were answered by the Egyptian journalist Abd al-Rahman Muhammad, from Istanbul, by saying that I can confirm that most of the protesters in the streets are not from the MB. He continued: “The members of the group are exhausted from prosecution, arrest, and abuse, and the participation of any of them in these protests will be remarkable.” He added: “But the answer to Adeeb’s allegations is not by confirming that they are not MB, but by reminding him that the MB members, in the end, are Egyptian citizens who have the right to express opinion and protest as well, and their demands are the demands of a part of the Egyptian people, and the largest opposition group so far.” He continued, saying: “Mounir’s words do not come in the context of justifying the protests, but rather within the framework of justifying the repression, as the regime knows that international public opinion will be more receptive to arresting and killing protesters if it says that they belong to an Islamic group, even if it is a political group that does not pursue violence.”

Al-Sisi’s supporters tried to mock the ongoing wave of protests, saying it was the Galabiya Uprising, referring to the fact that many of the protesters were wearing galabiyas.

Egyptian human rights lawyer Gamal Eid said on Twitter that a friend of his gave him a galabiya three years ago, and that he had never worn it during that time. Still, he is thinking about wearing a galabiya now because wearing it is an honour. Egyptian left-wing journalists mentioned that workers and peasants launched the most significant revolutions and that those with blue collars, for example, were a sign of a significant revolution that changed the course of history. Egyptian activists confirmed that the galabiya is the dress of the majority of Egyptians in villages and farmers and that the mockery of their clothing is racism.

Abdel Fattah stressed that the number of demonstrators would increase and that every day the Egyptians broke the barrier of fear and more people would start to join them. He added, “The fact that the numbers are few does not mean that the majority is satisfied with the system, but the majority are afraid, but that fear will not last for long.” “The numbers are increasing every day, and they will continue to increase as Egyptians gain confidence in themselves and in their ability to change until it reaches the point of a comprehensive revolution,” he stressed.

Abdel Fattah considered that the protesters in the streets of Egypt are those who have escaped the deception that the regime’s media is trying to mislead the Egyptian people with, by claiming that the country is on the right path and they should be patient over economic hardships.